NASHVILLE, Tenn. – If everything had gone according to plan, Missy Wood thought she’d have a job helping at-risk youths by now.

Wood, a recent graduate of Middle Tennessee State University, saw her internship with Court-Appointed Special Advocates end abruptly in March as the COVID-19 pandemic took root in Tennessee. She started applying for jobs with the Department of Children’s Services and similar organizations in April.

By the time she graduated in May, new job postings for her chosen career had all but disappeared.

Wood is one of the thousands of graduates across the nation who face a turbulent job market amid the novel coronavirus pandemic. More than 47 million Americans have filed jobless benefit claims since the middle of March, according to the Labor Department.

Now, she’s babysitting for a Murfreesboro-area family twice a week as she continues to search for full-time work.

“I’m just sitting and waiting, and it’s frustrating because I took the five years and got a degree, and I’m ready to start with a career,” Wood said. “I’m just on hold right now.”

In March, businesses across the country temporarily closed their doors – some by choice and some due to state mandates – in an effort to prevent the virus’ spread from overwhelming hospital systems.

The economic impact of these closures was swift and severe. While the nation experienced an unexpected uptick in jobs when roughly 2.5 million positions were added in May, economists expect the unemployment rate to stay high, hovering around 10% by the end of the year.

Vincent Phamvan, the owner of recently-launched Nashville career coaching company Vyten, is no stranger to the challenges of starting a career in a withering economy, having graduated from college during a recession in 2009.

“I think even for the Class of 2020, it’s worse than the Class of 2009,” Phamvan told The Tennessean in a phone interview. “The dichotomy of going to college in one of the best economies and then months before graduation have it turn into one of the worst economic crises in decades – I don’t think anybody could have expected that type of an extreme change.”

The rising number of unemployed Americans wasn’t the only blow for college students looking to join the labor market. Internships, a typical gateway for college students and entry-level workers to gain experience in their chosen field, also were hit hard – between March 1 and April 9, the volume of new internships posted on LinkedIn’s job listing platform dropped by about 60%, according to the company.

Devin Wilkinson, a junior at the University of Tennessee at Knoxville, was slated for an internship with a bank holding company in a Knoxville office, where he would focus on portfolio and relationship management. Due to COVID-19, the internship became a remote position working for an office based in Minneapolis.

Wilkinson, a finance major, said his career plans haven’t changed, and he views the shift as a learning experience and an opportunity to build his virtual communication skills.

“I was one of the fortunate ones that (my internship) didn’t get canceled,” he said in a video interview. “I know a lot of people had their internships canceled.”

Some industries have been bolstered by the pandemic.

This year there is “increased demand from health care and retail companies who are hiring workers to be on the front lines of coronavirus,” Blake Barnes, author of LinkedIn’s 2020 guide, told The Tennessean. “And as companies are pivoting to fully-remote teams, we’re also seeing demand for jobs that can be done from home, such as systems engineers and developers.”

The data does leave questions. It’s not clear how much of the apparent year-to-year decrease in overall job listings can be attributed to the economic impact of the pandemic versus other factors, and it’s not clear how many of these listings represent jobs and internships that are actively being filled by the companies that post them.

Wood wonders what job listings will look like as more opportunities begin to open back up, and she’s beginning to consider applying for positions outside of her career path. Increased competition on job boards is a palpable concern.

“There’s a lot of us out here that are looking for jobs,” Wood said. “That’s kind of scary.”

Phamvan, the owner of Vyten, said the percentage of underemployed college graduates is likely to increase in the next few years – a ripple effect of the pandemic. But he doesn’t want this prospect to discourage recent graduates from continuing their job search and bettering themselves.

Phamvan went to work at Best Buy after college, making $12.50 an hour, a near 50% pay cut from his high school job. At the time, he said, the challenges he faced felt like “the end of the world.”

This message was a focus of Vyten’s first conference, a virtual event called the Hope Summit that took place in early May.

More than 6,000 people joined the online career coaching conference, including roughly 680 people ages 18 to 24, according to data collected by Vyten. The largest group in attendance fell in the 25 to 34 age bracket, with roughly 1,400 in attendance.

Some students and recent graduates have seen start dates postponed, internships canceled and job offers rescinded, according to Mark McCloud, director of career planning and development for the University of Tennessee, Martin, and Stephanie Kit, director of the Center for Career Development at UT Knoxville.

College career centers quickly transitioned to offering virtual career coaching, job search help and opportunities to develop more skills. McCloud and Kit are encouraging students to continue to network with their colleagues and potential employers virtually – a key to “staying in the game.”

“I would say the biggest message of all is that people need to be applying,” Kit said. “There are industries and employers that are actually doing well right now, and growing and hiring. So it may represent sometimes a shift in goals or plans for your first job, but there are still opportunities out there to be had.”

Brooks Leftwich graduated from UT Knoxville in May with a bachelor’s degree in mechanical engineering.

He was supposed to leave for Taiwan in August to teach English to elementary school students as part of the Fulbright program but travel restrictions pushed back those plans until at least January. He turned down a job opportunity in sales to accept the Fulbright position, and March was rife with uncertainty about his immediate future.

Now he’s continuing to do data analytics work for UT Knoxville, which kept on many of its student employees through the summer. If he’s unable to find a position at the university in the fall, he plans to explore volunteer opportunities related to children’s programs at the Knoxville Zoo or The Muse Knoxville to help him prepare for his eventual teaching role.

Leftwich is also studying for the GRE graduate school entry exam and keeping connections with the friends he made in college.

“I’m really just looking out for the next opportunities that are coming up because you never know what a new season can bring,” he said.

Leftwich, Wood and Wilkinson have at least one thing in common: an overall hopeful attitude about their future.

Wilkinson offered a simple message: “Don’t give up.”

“Some people kind of have gone into hibernation mode, I guess, and not really taken a lot of action,” Wilkinson said. “But I’ve also seen people spending the time to learn a new skill over the summer if their internship was canceled or networking.”

McCloud thinks students and recent graduates, many of whom are well-versed in technology, are uniquely qualified for work-from-home positions and social media roles.

Kit said she’s seen more students considering graduate school, and UT Knoxville has seen an increase in summer school enrollment, which she said can be a positive thing.

Those whose plans have changed can shift their mindsets and keep moving forward, she said. If an internship opportunity was lost, one might look for a micro-internship or online opportunities, for example.

Phamvan said job seekers should consider if a particular role fits their passions and skills instead of what they originally imagined themselves doing.

“In the coming year, it will be interesting to see if this global pandemic impacted anybody’s ideas for career goals in general,” Kit said. “I’m wondering if people are getting interested in epidemiology or public health because of this, or maybe they’re seeing risks in other ways that make them not want to go into a certain (field).”

Among the career coaches’ advice, the common threads are preparation and faith, so when employment opportunities come, the newest additions to the American workforce will be prepared.

“I’m ready to start my career,” Wood said. “I’m so excited. (I spent) these past five years working toward child development and family studies, and I’m just so ready for that.”

Sat Jul 4 , 2020
Florida has once again shattered its single-day record for coronavirus cases, reporting 11,458 new cases of the respiratory illness on Saturday. The Florida Department of Health has now reported a total of 190,052 confirmed coronavirus cases and 3,702 deaths, the Orlando Sentinel reported. On July 4, there were 18 new […] 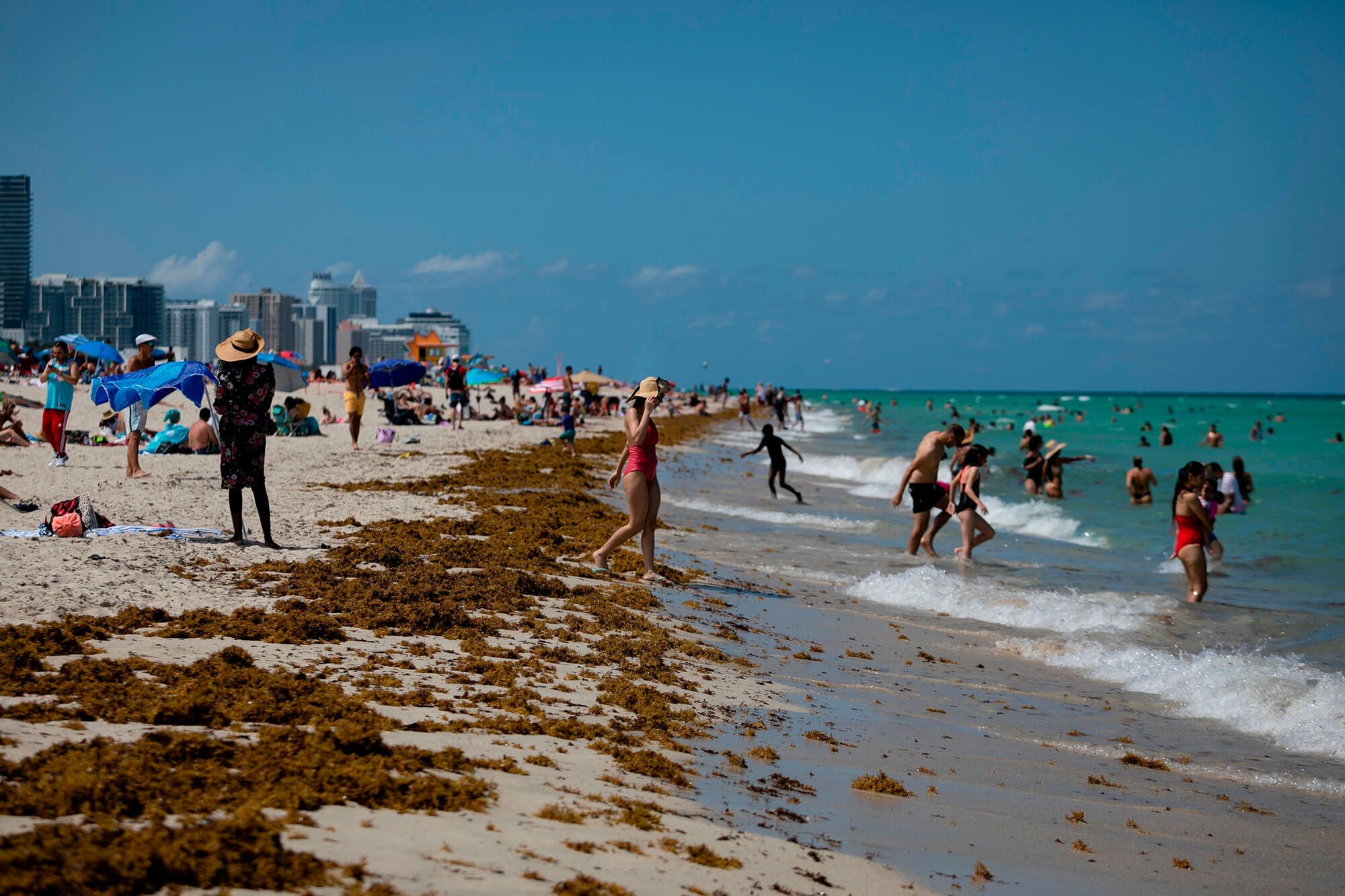