With President Donald Trump’s poll numbers flagging in Florida and the state continuing to struggle with one of the nation’s highest rates of new COVID-19 cases, Vice President Mike Pence visited the University of Miami’s Miller School of Medicine on Monday to focus attention on one of the pandemic’s few potential bright spots: the rapid development of a vaccine against the disease.

Noting the president’s emphasis on speed, Pence said the federal government has positioned itself through public-private collaborations with drug makers to ramp up mass production of a vaccine at the first sign of its safety and effectiveness.

“We’re actually having these companies produce the vaccines as we speak, and as soon as they’re confirmed to be safe and effective we’ll have tens of millions of doses ready to distribute across the country,” Pence said, after he met with doctors and researchers at UM’s medical campus in downtown Miami.

UM is one of 89 locations around the country, and one of six in Florida, enrolling volunteers for the experimental vaccine developed by the National Institutes of Health and a vaccine company, Moderna Inc. It is the first COVID-19 vaccine developed in the United States to enter a Phase III clinical trial, and one of many in the works.

The vice president visited Miami, touching down at Miami International Airport shortly after noon, accompanied by Dr. Stephen Hahn, commissioner of the U.S. Food and Drug Administration. The FDA will need to approve the new vaccine before its use by the public.

Hahn said the FDA is looking for people “from all walks of life and all groups” to participate in the trial. He said there are more experimental vaccines in various stages of development, and that FDA scientists “expect at least two additional [vaccines] to be in Phase III trials within the next several weeks.”

The vaccine trial launched at UM Monday is part of Operation Warp Speed, the government’s program to accelerate vaccine development by naming at least five projects to receive billions of dollars in federal funding to begin preparing manufacturing and distribution capacity for their drugs.

At least two additional vaccine candidates are being developed in collaboration with the Department of Defense, the Department of Health and Human Services and drug companies, including one with Novavax, a vaccine company based in Maryland, and a second with Pfizer, an American multinational pharmaceutical company.

Other vaccine trials underway and receiving hundreds of millions in U.S. government funding include one from Oxford University and AstraZeneca and another from Johnson and Johnson.

The vice president’s visit to Miami provided the Trump administration with a counter message to the wave of criticism that has followed as the United States became the epicenter of the global coronavirus pandemic with more than 4.2 million confirmed cases and nearly 150,000 deaths — more than any other nation.

“President Trump wanted me to be here, first and foremost, to say to the people of Florida that we are with you,” Pence said. “We’ll stay with you every step of the way.”

He vowed that Florida healthcare workers and hospitals would receive the support they need to continue delivering care to COVID patients and others.

Joe Biden, the presumptive Democratic nominee for president, said in a prepared statement that he, too, hopes the Phase III clinical trial launched Monday produces an effective vaccine. But the former vice president said the Trump administration should let scientists and public health experts lead the effort, independent of political interference and with an emphasis on transparency.

“The development of a new vaccine requires a dedication to science, coordination, transparency, truth, and fairness to all — and we have a president who stands for none of these things,” Biden said.

Pence delivered his message on a day when Florida’s health department confirmed 8,892 additional cases of COVID-19, the lowest single-day total reported in weeks. The health department has reported a total of 432,747 cases statewide, with 107,315 cases and 1,404 deaths in Miami-Dade — more than any county.

Monday’s total of newly confirmed cases is the lowest the state has seen since 7,347 cases were confirmed on July 7. However, the statewide positive rate for all test results in the past two weeks has averaged nearly 16% — well above the 5% that public health experts advise governments to meet before reopening.

Gov. Ron DeSantis, who greeted Pence at the airport and participated in Monday’s roundtable meeting and the press conference that followed, told reporters that he can see “the light at the end of the tunnel” for the state’s COVID crisis.

Pence added that he is “encouraged by the favorable trends here in Florida.”

Florida’s governor and the vice president shared some data on the state’s coronavirus crisis when they met next to the plane, according to Miami-Dade Mayor Carlos Giménez, who also greeted Pence at MIA. The group discussed “the state of Covid 19 In the state and county,” Giménez said in a text message to the Miami Herald. “We spoke about the trends and that appeared to be positive. The governor shared some trend lines with the VP.”

Pence called the beginning of Phase III trials a sign of Trump’s “relentless drive” to create a vaccine, and said the administration continues to believe the U.S. will approve a vaccine for use late this year or early next year.

Dr. Susanne Doblecki-Lewis, who will be leading UM’s research team during the trials, said they have been “amazed and humbled by the amount of volunteers who have stepped forward” to participate in the trial.

The NIH-Moderna vaccine is a new approach to disease protection, using the virus’s genetic material — or so-called messenger RNA — to trigger an immune response, generating antibodies that fight the virus. The vaccine is injectable and participants in the clinical trial will receive two doses, 28 days apart, to measure how the vaccine takes effect.

Dr. Anthony Fauci, director of the NIH’s National Institute of Allergy and Infectious Diseases, said in a teleconference Monday that the vaccine’s development has moved incredibly fast — reaching Phase III about six months after Chinese scientists first published the genetic sequence of SARS-CoV-2, the virus that causes COVID-19.

“That is very quick … from sequence availability to the time of a Phase III trial,” Fauci said. “There is no compromise at all with regard to safety nor of scientific integrity.”

The first 45 volunteers injected with the experimental vaccine as part of the Phase I clinical trial in March developed “neutralizing antibodies in their bloodstream — molecules key to blocking infection — at levels comparable to those found in people who survived COVID-19,” according to an article published in the New England Journal of Medicine on July 14.

The group’s goal is to deliver 300 million doses by January 2021. The first volunteer for Phase III was dosed Monday morning in Savannah, Georgia.

Fauci said the clinical trial is still enrolling volunteers as scientists seek to ensure representation in the study by a diverse group of Americans, particularly the elderly and racial and ethnic minority groups disproportionately impacted by the virus in terms of serious illnesses, hospitalizations and deaths.

More than 150,000 people have applied to participate in the trial. Volunteers will receive either a placebo or a dose of the experimental drug. Those interested in volunteering can sign up through the website, coronaviruspreventionnetwork.org.

Fauci said scientists and researchers likely won’t have reliable data on the experimental vaccine’s effectiveness until November or December at the earliest.

“I would be reluctant to say it would be any earlier than the end of the year even though that is a distinct possibility,” he said.

Asked how the Trump administration will ensure confidence in a new vaccine that has been fast tracked through the regulatory process, Pence replied that the vaccine’s development will strictly adhere to safety and efficacy standards.

FDA Commissioner Hahn noted that government scientists working with private pharmaceutical companies to develop a vaccine have no interaction with other government workers who will determine whether a vaccine is safe to distribute.

“We have drawn a very bright line between Operation Warp Speed and the FDA,” Hahn said. “Great scientists at the FDA will call the balls and strikes on this one.”

Once the vaccine’s safety and effectiveness are established, manufacturing and distribution can begin. Moderna CEO Stéphane Bancel said the company is “on track to deliver 500 million doses” by September 2021 if the vaccine is approved.

The federal government has committed nearly $1 billion toward Moderna’s vaccine effort. Bancel said the company has invested about $2 billion into the development and manufacturing of the vaccine, including construction of a new facility in Massachusetts capable of producing large quantities of the drug.

“We are focused on speed because every day matters,” Bancel said. “We are losing people every day around the world.”

Fauci noted Monday that other clinical trials for vaccines will also need 30,000 volunteers.

Getting vaccine to those who need it most

Once the vaccine is approved, the drug will be distributed based on the recommendations of a panel of doctors and medical ethicists with the National Academy of Medicine.

Dr. Francis Collins, NIH director, said that “tens of millions” of doses will be available early on, but that won’t be enough for the United States, where more than 4.2 million COVID-19 cases have been confirmed since March, according to Johns Hopkins University’s online disease tracker.

“It won’t be available for everybody,” Collins noted, “so decisions will need to be made.”

The panel headed by the National Academy of Medicine will produce interim recommendations by Labor Day, Collins said, followed by a public discussion by the end of September. The Centers for Disease Control and Prevention will then make more detailed recommendations on who will receive the vaccine first after healthcare workers and first responders.

Collins said the panel will look closely at what groups are at highest risk of severe outcome from COVID-19, including the elderly, those with chronic illnesses, African Americans, Latinos and Native Americans. “All of those who have taken a particularly heavy burden of this disease and for which we owe them the opportunity to get as much protection as we can provide,” he said.

Miami Democratic Rep. Donna Shalala, who served as Health and Human Services Secretary under President Bill Clinton and also is UM’s immediate past president, said distributing vaccines is “an ethical decision that ought to be paneled” by healthcare experts.

“Hopefully…we’ll have enough doses so it’ll be not a narrow decision but a broader decision and have the distribution system in place so we know how we’re going to distribute the vaccine,” she said.

Shalala was one of at least two Miami Democrats who criticized the vice president ahead of his visit to UM on Monday.

Democratic state Sen. Jose Javier Rodriguez said Pence and Trump are “trying to take credit for developments they don’t deserve credit for, and were actively trying to thwart until now.”

The Doctor Behind the Disputed COVID Data

Tue Jul 28 , 2020
Several physicians who worked with Dr. Sapan Desai during his residency at Duke University Medical Center said it became standard practice to double check anything he said about a patient. (Pete Kiehart/The New York Times) A college degree at 19. A medical school graduate with a Ph.D. at 27. By […] 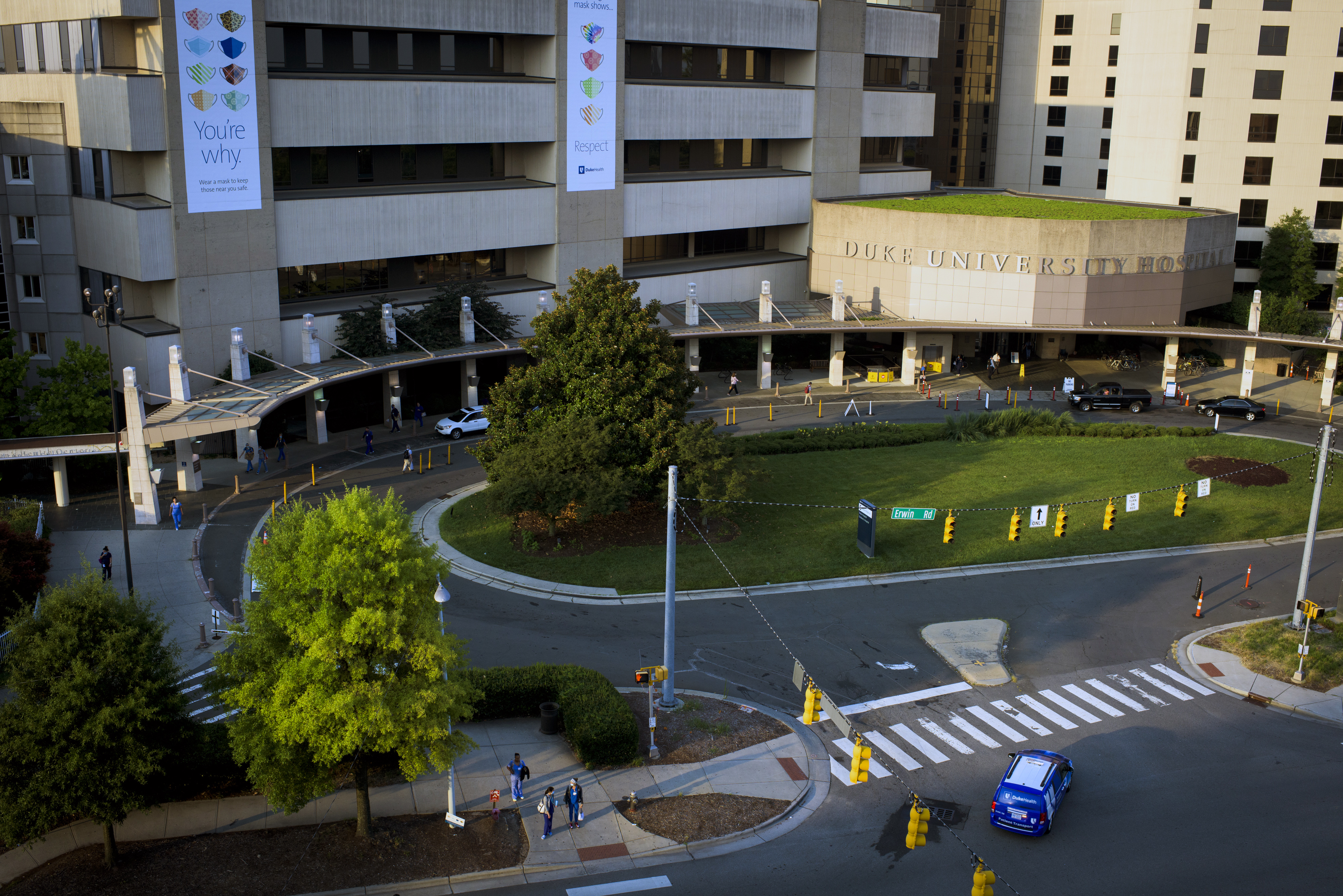