Take a glance at India Morse’s Instagram feed and you’d be forgiven for thinking she was just another fitness influencer posting workouts, healthy recipes, and the odd mirror selfie.

But look a little more closely and you’ll learn that Morse, whose handle is @youleanmeup, has a mission greater than helping people get fit — she’s fighting for more accessibility in the industry.

Morse was born deaf and believes that the fitness industry isn’t inclusive enough.

One of her main gripes, she told Insider, is that workout classes aren’t visual enough for the deaf community.

“There’s always so much talking throughout classes and a lot less action!” she said.

“Usually the major barrier in the fitness industry is the fact that the classes are always based in such dark environments.

“Fitness classes tend to be very dependent on having music to go along with the vibe but in all honesty, they often forget about the importance of being visual.”

Morse, who’s 29 and based in London, UK, said that unless you tell an instructor you’re deaf beforehand so they can use more hand gestures or write down information for you, there’s rarely anything done.

Of course, over the past few months fitness classes have moved from boutique studios to Instagram Lives, but these are no better for the deaf community.

“The virtual live classes, especially on Instagram, aren’t really accessible as they keep moving around whilst I’m having to try to lip-read them or they suddenly shout out that they are changing the workout at the last minute which I don’t know as I cannot hear,” Morse said.

“Prior to the workouts beginning, I have tried following what they are saying but due to the lack of being visual in their explanations I regularly get lost and don’t know what to do, and then they suddenly say ‘go’ and the workout is in full swing!”

Morse said it affected her a lot at first, but then she adapted and decided she would simply have to create her own workouts. And that’s what she did.

However, she believes the social network should be doing more to cater for the deaf community.

“I would say it has poor accessibility, for example live workouts without any captions,” Morse said. “It would be amazing if they considered this.”

It’s not just Instagram though — Morse laments the fact that podcasts aren’t accessible to her either.

“I am really gutted that I miss out on all of the podcasts out there, a lot of people have mentioned them and how they have really helped them,” she said.

“It’s just such a shame that I’m not able to access such information as I would like to be well educated — instead, I’m often behind with things.”

In May 2020, Morse launched her online coaching app, Coaching By India: a whole platform with captions and an interpreter voicing everything Morse signs in video demonstrations.

“This means that absolutely no-one can miss out, it isn’t just for the deaf community and I want to encourage anyone and everyone to get involved!” she said.

A lot of her clients are people who’ve faced accessibility issues within fitness.

“They are so happy to have me as their online coach now because I am able to communicate with them with no barriers,” she said.

Morse feels so passionately about what she does because she loves seeing people “smiling, gaining confidence in themselves, and achieving their goals with my encouragement,” she said.

And she certainly pushes her clients, saying she’s “strict” during training.

“I tend to shout a lot (in a nice way, I promise!)” Morse said. “Maybe my deaf clients cannot hear me, thank goodness for that!”

Each sessions lasts 30 to 45 minutes, so they focus and work hard.

“The best thing about my clients is their determination to push themselves to show what they can do, along with my support all the way,” she said.

Although she was sporty at school, it wasn’t until her early 20s that Morse really got into fitness, prompted by a bad break-up and the need for a distraction.

Morse works out regularly but knows the value of rest days and recovery, she eats well but still enjoys chocolate and McDonald’s burgers from time to time.

“I’m always telling my clients it’s fine as long as they fit it into their macronutrient [carbohydrates, protein and fat] targets too,” Morse said.

“I really am all for representing a balanced lifestyle and want to show people that they can enjoy food still.”

So if you’re craving something specific, don’t deprive yourself as you’ll likely just end up overindulging later, she said.

“I hold my hands up to the fact I still have some chocolate every day but do not believe in overindulging and then beating yourself up about it,” Morse said.

“I am an advocate for eating what you want, just in smaller quantities.”

Morse says that the smallest of changes could have the biggest differences when it comes to welcoming the deaf community into the fitness industry.

“Fitness could be made more accessible by doing such simple things, like adding captions and just being more visual,” she said.

“Just imagine if you were deaf or put in your earplugs and see how you get on — then you’ll know how to make it more accessible!”

A plus-sized woman criticized slimmer influencers for ‘taking up too much space’ in the body positivity sphere, and it sparked a huge debate

Sun Jun 28 , 2020
(Bloomberg Opinion) — Why all the fuss about masks? Why won’t people just wear them? “Masking has become controversial. It shouldn’t be,” former Food and Drug Administration Commissioner Scott Gottlieb said on “Face the Nation.” To health experts, masks seem like a simple, apolitical precaution. In medical jargon, they’re personal […] 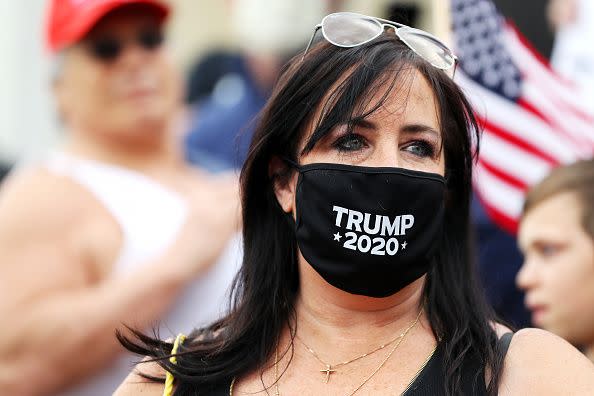