Comfort customers are playing hard to get these days. As the ongoing pandemic has spurred many to add a morning walk or run to their daily regimens, they’re heading to comfort stores looking for a pair of performance sneakers over casuals.

Brands such as Hoka One One, On and New Balance are among the sought-after brands, according to independent retailers, who are seeing this business explode and grab market share from sport-inspired looks from core comfort names.

“Women and men are not going out or traveling, so they don’t need to replace their current shoes or sandals,” said Rick Ravel, president of Karavel Shoes in Austin, Texas, about consumers’ changing lifestyles due to COVID-19. “But, they’re walking or running and wearing out those shoes.”

Athletic shoes accounted for 46% of the store’s June sales, according to Ravel, with New Balance ranking No. 1, followed by Brooks. “We’ve added Reebok, and are looking to possibly add two other lines.”

At Alan’s Shoes in Tucson, Ariz., owner Alan Miklofsky said the store’s athletic shoe sales are outpacing last year’s numbers by roughly 50%. “Customers are highly engaged in shoes they need and less engaged in shopping for shoes they want,” he said. “Athletic-inspired shoes from comfort brands are not performing well for my company.”

While these high-profile sneaker brands can be found at a multitude of brick-and-mortar and online stores, comfort customers, many with hard-to-fit feet, are opting to purchase them at comfort specialty stores due to the fitting expertise they offer.

According to Skip Chandler, owner of Chandler’s Walk Shoppe in Salt Lake City, known for its pedorthic services, said Hoka One One is currently the store’s top-selling athletic brand, due in part to its highly cushioned build. “It takes care of a number of foot issues,” Chandler said. Over the last two months, he added, it has even outperformed New Balance, a comfort store favorite due to its offering of sizes and widths.

At Golden Shoes in Traverse City, Mich., the comfort-casual business is slow and has been overtaken by athletics, said co-owner Bill Golden. “Looking at my walls, I’ve sold about 10% of my comfort shoes; it just isn’t happening,” he said. “People are not looking for these.”

On is the store’s No. 2 brand behind Birkenstock. “I call On lifestyle shoes,” he said. “Customers are not running a marathon. They like the colors and also see them on other people.”

As athletic sales continue to grow, Golden said that this spring he added kids’ Under Armour styles and will bringing in adult sneakers for spring ’21. “They’ve come out with styles for better shoe stores, independents and running stores that won’t be seen in Kohl’s.”

Core performance is also a bright spot for Abbadabba’s in Atlanta, which carries Hoka, On and New Balance. Core performance styles currently account for about 25% of sales, according to Jennifer Smith, director of buying. “We’re finding more people want an athletic look [over a comfort shoe],” she said. “People think they need a sneaker unless they’re going touring and traveling.”

However, Smith said her team is trying no to overdo its performance offering. “When we spread out too wide, it doesn’t make sense for our customer, because we are not selling to a runner who needs a particular posted style,” she said. “We try to cover a lot of different needs, but in fewer styles than a true running store.”

Topps for Shoes in Asheville, N.C., has also noticed a shift to core performance styles, said owner Alex Carr. “The trend has been percolating for a couple of years, but peaking right now,” he noted, adding that the category is the key focus of its buying right now. “Life was already getting more casual, and now even more so since people are working from home and not going out to dinner and weddings.”

Women’s athletics is overtaking sales of casuals and dress styles for Lucky Shoes in Columbus, Ohio, according to Tom Luck, CEO, with business in the category up 48% since the chain reopened in mid-May. While Luck also operates two Vionic stores, where athletic styles are also performing, consumers today want authentic product.

Comfort brands have not been left out of the conversation entirely, when it comes to athletic-inspired styles. According to Rusty Hall, president of Mephisto USA, the company’s Allrounder collection of active-inspired styles is resonating with customers, particularly those just embarking on an exercise plan. “These consumers [may] go into a comfort store and ask, ‘What do I wear casually since I’m not a marathoner,’” he said. “They want to walk a mile, so the retailer doesn’t necessarily need to take them to a sneaker, but instead to a good walking casual.”

Meanwhile, Earth Inc. has seen success with its active sandals, which fit well with the growing trend of Americans heading outdoors. “We offer performance-based sandals with active uppers that allow consumers to do these activities in the summer,” said Jocelyn Thornton, EVP of product and merchandising. “That’s where we are winning. We live in that space.”

For today’s fitness customers with foot issues, sport-comfort brands such as Traq by Alegria are proving to be popular, due to features such as removable footbeds with arch support, an air-circulating system and wider-fit lasts, according to Leon Hill, director of sales. “There are people who have foot problems and don’t go for your typical Nike,” he said, noting that sales of the brand, which launched just two years ago, are up 75% on Zappos.com since March.

But, it’s the brand’s built-in app — which allows wearers to track their steps — that has helped distinguish the brand in both the athletic and comfort markets. “The app allows people to set up their own group of walkers and hold competitions,” explained Hill. “When someone sees they’ve walked 10,000 steps — four or five miles — they feel good about themselves.”

Fri Jul 17 , 2020
While the outbreak of COVID-19 has crumbled several businesses, many companies in the consumer staples space appear to be on firm grounds. One such consumer staple player benefiting from such trends is Helen of Troy Limited HELE, with its shares up as much as 40.6% in the past three months […] 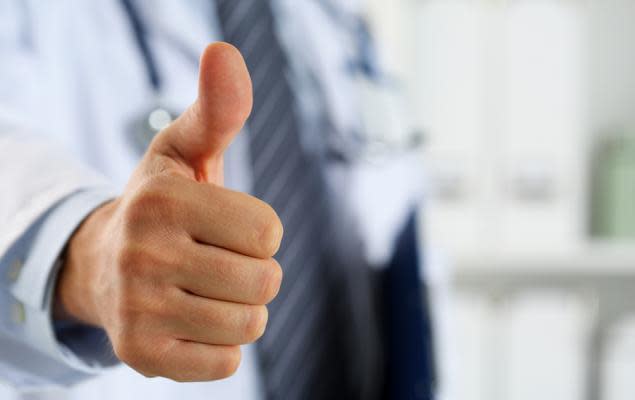