Activity levels amongst children have “significantly dropped” in the latter stages of lockdown, headteachers have warned, as the Government comes under renewed pressure to guarantee primary school sport funding.

Christine Ohuruogu, the former Olympic, World and Commonwealth 400m champion, and Nicky Butt, the ex-Manchester United and England midfielder, have also added their support to an open letter calling for Prime Minister Boris Johnson to help.

Concern centres on the £320 million PE and Sport Premium, which is largely funded by the Sugar Tax, and which the Government has so far refused to guarantee from the next academic year in September.

The Government is expected to respond to the campaign by the end of the week, prompting primary schools across the UK to lay bare a potential crisis in child activity levels as schools return to the ‘new normal’.

Penny Sheppard, head at Queen’s Hill Primary and Nursery School in Norwich, said that, despite a craze for online workouts led by Joe Wicks, “we know that many children have participated in minimal physical activity over the last few months”.

“We want to be in a position where we can be sure that we can continue to deliver high-quality sport experiences for our children well into the future,” she said. “We know from experience that when ring-fenced funding is cut the curriculum is directly affected.”

Graeme Wright, head at Sibsey Primary, Boston, Lincolnshire, added: “We have not seen many pupils face to face for many months and we need to be able to plan how to raise activity levels for all our pupils. This funding allows us to target way beyond PE lessons, methods of raising pupils fitness and well being.”

Rugby World Cup winner Lawrence Dallaglio and Commonwealth Games gold medal-winning gymnast Craig Heap have been helping to lead a campaign that is also being coordinated by Alan Watkinson, Sir Mo Farah’s former PE teacher, and Vincent Brittain, the chief executive of Inspire Plus, a Grantham-based sport and education charity.

The uncertainty over funding has put the jobs of numerous PE providers and staff at risk and sparked fears that, at a time when an inactivity crisis among young people has been worsened by the coronavirus lockdown, there could be even less opportunity for children to get active at school.

Tony Chapman, of Mattishall Primary School in Dereham, added that “the current situation and lack of information about the continuation of the funding threatens to undermine the impact of that good, compounded by the current school situation”.

Anne Elliott, the principal at Delta Academy Trust, Doncaster, said pupils’ long-term health is at risk. “Developing good habits in childhood will inevitably have a huge benefit through adolescence and into adulthood,” she said. “Sport premium funding has enabled all schools to widen access and raise the profile for all pupils.

“Arguably, in the current climate, many pupils will be facing very significant challenges impacting greatly on their physical and mental health. Access to a rich curriculum offer around physical activity will be critical to their recovery in the immediate future and over the longer term. An announcement on sport premium funding before the summer is vital in order to enable school leaders to plan to  deliver an offer which is vital to the health and well- being of all our children.”

The letter to Government was sent to Downing Street last Thursday. Alex Danson, the Olympic gold medallist, previously told Telegraph Sport that PE was “not a luxury” but “an education that will change lives”.

Alison McGovern, the shadow sports minister, also joined Tracey Crouch, the Conserative MP and former sports minister, in calling for clarity and warned of “catastrophic” consequences if health inequalities were not tackled.

The letter, which coincided with the Youth Sport Trust’s first ever virtual school sport week, follows alarming new research which shows that one in 10 children have been getting no daily activity during lockdown.

The Department for Education said that the government “wants to make sure all children are getting an active start in life”, but said “the position of the PE and Sport Premium in the 2020/21 academic year will be confirmed shortly”.

Thu Jul 2 , 2020
USC students are being asked to stay home and continue their education online in the fall amid the coronavirus crisis. (Al Seib / Los Angeles Times) Amid the alarming surge in coronavirus spread, USC announced it will no longer bring all undergraduates back to campus for the fall semester and […] 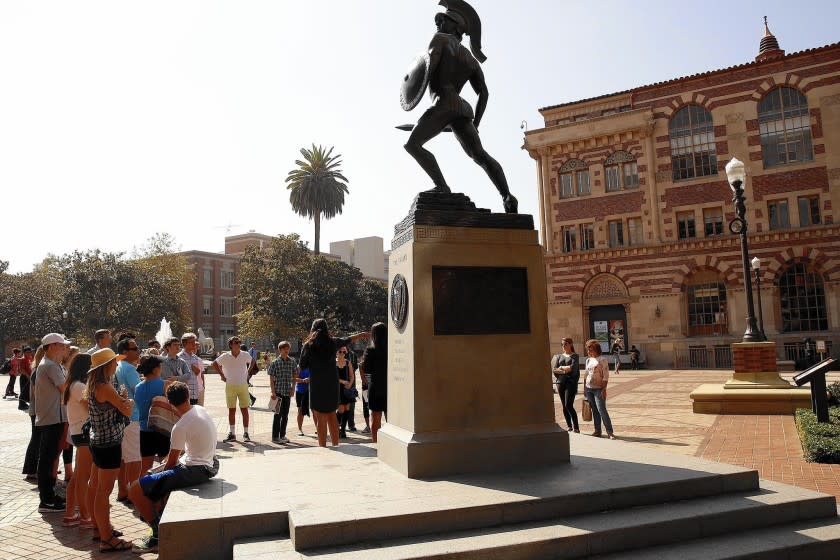