As summer camps across the country debated whether and how to operate during the coronavirus pandemic this spring, Kanakuk Kamps, a prominent network of Christian sports camps in Missouri, announced its five overnight camps would open to over 20,000 kids starting May 30.

“Our full-time summer staff of 1,600 qualified individuals including 100 registered nurses and 60 volunteer doctors are hired and sitting on ready,” Joe White, who runs the camp with his wife Debbie-Jo, told families. “We are planning on being open all summer.”

On its website, the camp assured parents, “We are focused on taking all reasonable measures to prevent the spread of COVID-19 in our Kamps.”

But now even cautious hopes that COVID-19 might be kept outside Kanakuk Kamps’ gates have already been dashed. On July 1, parents were notified by email that one of the camps, known as K-2, was shutting down. The Stone County Health Department’ updated the community on Facebook : 41 campers, counselors and staffers tested positive for COVID-19; they had come to camp from 10 states and multiple counties in Missouri. The Missouri Department of Health and Senior Services later updated the count to 49, according to the Springfield News-Leader.

Parents received an email from Rebecca Duncan, the Kanakuk health services director, advising them their children may have been exposed: “As your Kamper returns home, we recommend that you consider a 14-day self-quarantine for your child and monitor for symptoms of COVID-19.”

The plan to open or close overnight camps this summer was a wrenching one, for families and camps alike. Parents are increasingly desperate: A recent American Psychological Association survey found 60 percent of parents “have no idea” how to keep kids engaged this summer. Camps depend on the income of two short months to keep going year after year. Yet, as stressful as it was to learn about cancellations or virtual substitutes, camps in session offer new worries — namely, keeping children safe.

Kanakuk’s COVID-19 experience isn’t an isolated one. Two YMCA camps in Georgia opened then shuttered after a counselor tested positive for the coronavirus. Eagle Lake Camp in Colorado reported a coronavirus outbreak among the staff members on site prepping for opening season. The camp won’t welcome campers now, as there are at least 12 confirmed cases and 12 more “probable cases,” according to an NBC affiliate.

In Pennsylvania, Camp Seneca Lake announced it was pushing back opening day this week and quarantining a group of staff members after one person tested positive during counselor orientation. The camp posted on Instagram that anyone “who steps foot on our campus will be tested for Covid-19” immediately.

Though dozens of camps across the country chose to shut down, others are still planning to open, including the Jewish summer camp Camp Modin in Maine whose truncated summer season begins July 9. Camp director Howard Salzberg told the Jewish Telegraphic Agency that it had received hundreds of applications.

Kingsley Pines Camp also in Maine announced it would open with a single session this summer and require all incoming campers to be tested within seven days prior to arrival. It also encouraged families to self-isolate and avoid social gatherings in the weeks prior to camp and informed them that no transportation would be provided to camp.

But the directors also warned would-be attendees: “Please understand that even with the steps we are taking, we cannot guarantee that COVID-19 will not enter camp, or that your child will not get it. We will require that all parents sign a waiver prior to camp acknowledging this risk. Each family must carefully weigh the risks and benefits of camp, and decide what is right for their children. We strongly discourage any child with a secondary health condition from attending camp.”

Most camps that promised to safely open suggested a similarly ambitious honor network for both campers and counselors regarding isolation prior to camp’s start. A video on Kanakuk’s website explained that all campers and staff would be required to self-quarantine for 14 days prior to the start of their camp term this year. Parents were asked to limit their child’s “exposure to non-family members, avoid large crowds and gatherings and avoid unnecessary travel prior to camp.” A health screening card was mailed to campers two weeks prior to camp, and parents were asked to record the child’s temperature for seven days before arrival.

Some camps explored the idea of doing a bubble or pod system, where campers join counselors in small groupings and stay insular within the camps themselves.

“I think that with the increasing number of cases in so many states now, I am more concerned than I was before about the feasibility of summer camp,” Dr. Jessica Justman, an epidemiologist and associate professor of medicine at Columbia University’s Irving Medical Center, told NBC News.

“These things do always come down to individual judgments and decisions that parents have to make,” she added.

With rules on gathering differing from state to state and some sleep-away camps still operating, the American Camp Association provided a field guide, and the Centers for Disease Control and Prevention offered suggestions for safer youth camp operations this summer. While children have been largely, but not entirely, spared from the worst known effects of the coronavirus so far, there is conflicting evidence about how likely children are to spread the virus to adults.

Kanakuk did not respond to multiple requests for comment from NBC News. Its existing guidance outlined a protocol of “isolate, confirm, respond, and remove” for campers or staff who are suspected of having COVID-19. The website lists procedures primed to provide a degree of social distancing, enhanced sanitation practices, implementation of daily temperature checks and provided face coverings for campers.

“One of the more pressing things is we need to have a conversation if we’re going to do this about what does it look like if cases occur, because I don’t believe that will be 100 percent safe, or I will say 100 percent infection-free,” Dr. David Cennimo, an infectious disease expert at Rutgers New Jersey Medical School, said.

“In some ways, especially the day camp scenario is kind of a dry run for school,” Cennimo said. “And if we’re not able to pull off day camps, I don’t know how we open schools.”

Related: “Any kind of an experience at a summer camp in 2020 is going to be a different experience,” one pediatric infectious diseases physician said.

Fear of the situation Kanakuk now faces led the family-owned and -operated Camp Friendship in Palmyra, Virginia, to fully shut down its overnight summer camp season for the first time in over 50 years.

“Given current circumstances, we couldn’t guarantee that we could keep campers safe,” Sarah Ackenbom, a director of the camp, said.

Ackenbom stressed that health and safety are Friendship’s top priorities, even when it comes with financial strain. All of Ackenbom’s revenue comes from summer.

“All summer camps are looking at if you decide to cancel summer camp, this could be closing your business for good,” she said. To drum up some income, Camp Friendship has begun renting out some of its cabins as campgrounds for families.

Much of the conversation around camps opening or closing has focused on kids going to high-end camps that cost several thousand dollars per session. But the children at highest risk for lack of summer programming are those in lower income brackets.

Kids Across America, a sister camp to Kanakuk that focuses on kids from low-income families, announced in May that its summer programming would be virtual. Bruce Morgan, CEO of Kids Across America, said the decision was financial. Groups and families who would normally send their kids to camp are using the funds for food and other vital needs during the pandemic.

Falls Creek Youth Camp in Oklahoma and the Inspire Sports Camps in New Jersey, both designed for kids whose families have lower incomes, also went online.

Though there are free summer programming options online, even having access to a device through which one can participate in virtual programming is not a given for families with limited means.

For some families though, camp is summer, and that means trusting camp to take care of their children.

“I feel like children need to exercise and feel like they need social interaction, like they need to be connected to nature,” Kanakuk alum Abby Stewart of Jacksonville, Florida, said before her kids left for camp.

“Ultimately, I think we’re going to now live, for the next couple of years, in a world where there will be continual alerts for new cases, contact tracing and periodic, either, pauses, opening or re-quarantine,” Cennimo, the Rutgers infectious disease expert, said. “And I think that’s going to be the future for all of us, including our children.”

That’s what will happen in Caren Sharpe Herbst’s home, in Allen, Texas. Herbst sent her youngest daughter to Kanakuk’s K-2 camp even after she learned two counselors had tested positive.

“I think they’re taking the best possible measures to keep our kids safe at camp, and I would not send my baby girl if I didn’t feel like they were going to be safe,” Herbst had told NBC News ahead of her daughter’s arrival at camp.

But just about a week later, Herbst was told to come pick up her daughter. Camp was ending the session due to the COVID cluster.

“We’re going to quarantine and go get her tested,” Herbst said by phone as she drove from Texas to Missouri to pick up her daughter.

“I don’t regret my decision to send my daughter,” she added. “I think Kanakuk did as good a job as I probably could have done. … This was the one thing she was looking forward to this summer.”

Mon Jul 6 , 2020
Broadway star Nick Cordero has died after a months-long battle with the coronavirus. He was 41. Cordero, whose Broadway credits include Waitress and Rock of Ages, died on Sunday morning at the Cedars-Sinai Medical Center in Los Angeles, where he had been hospitalized for over 90 days. He is survived by his […] 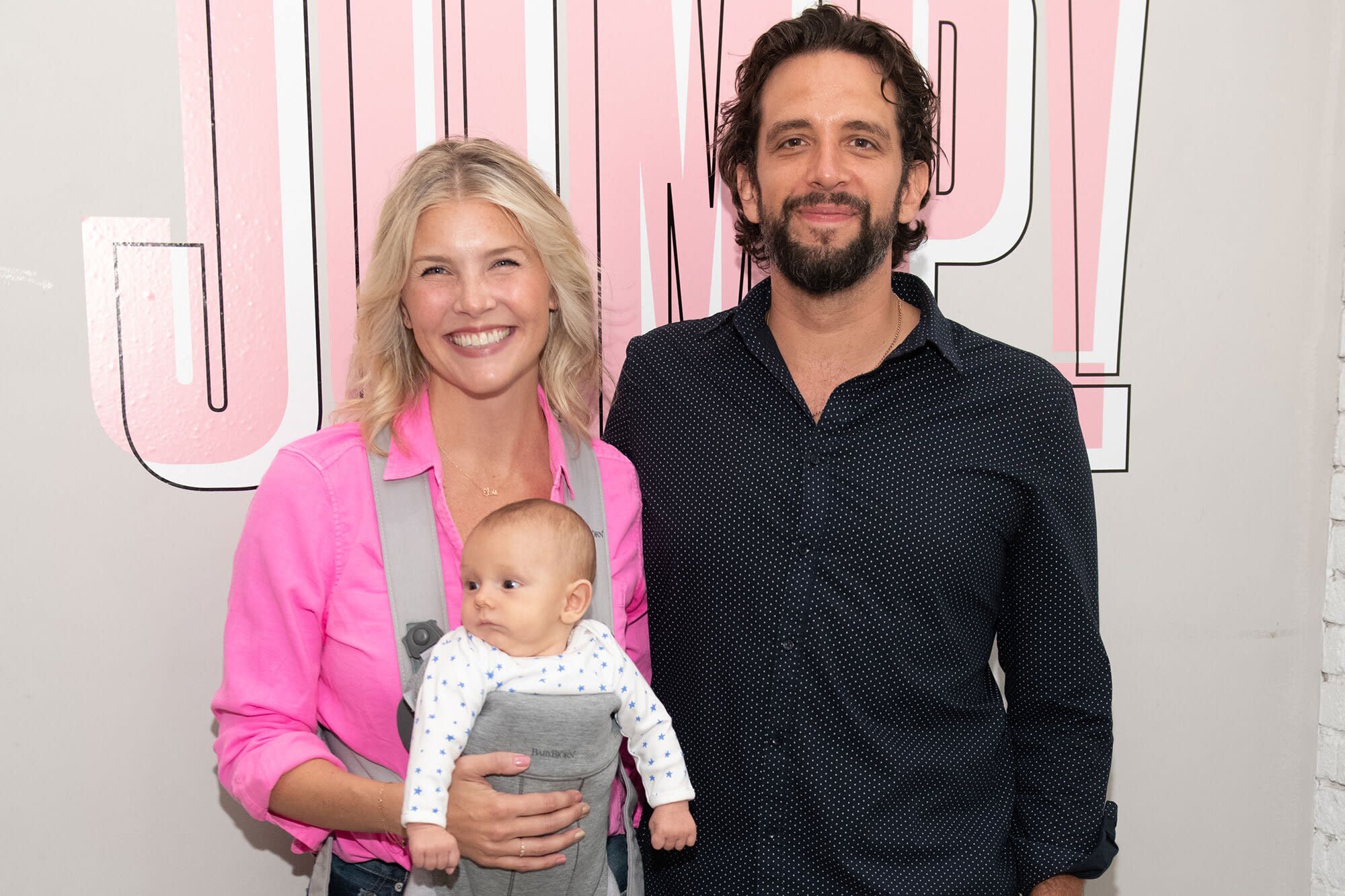