WASHINGTON (Reuters) – Groups representing the nation’s doctors, teachers and top school officials on Friday pushed back against pressure from President Donald Trump to fully reopen U.S. schools despite a surge in coronavirus cases, saying science must guide the decisions.

“Public health agencies must make recommendations based on evidence, not politics,” the American Academy of Pediatrics, two national teachers’ unions and a school superintendents’ group said, following days of threats by Trump to choke off federal education funds if schools do not open their doors for the upcoming academic year.

“We should leave it to health experts to tell us when the time is best to open up school buildings, and listen to educators and administrators to shape how we do it,” AAP, the American Federation of Teachers, the National Education Association and the School Superintendents Association said in a joint statement.

Their call was echoed by two medical groups – the Infectious Diseases Society of America and the HIV Medicine Association.

Trump ramped up his threat on Friday, saying the Treasury Department would re-examine schools’ tax-exempt status and their federal funding.

The Republican president this week also moved to eject foreign students attending universities in the United States if their schools do not offer in-person classes, prompting at least two lawsuits.

His push to reopen schools comes as cases of the novel coronavirus surge in some of the country’s most populous areas, prompting some state and local authorities to roll back plans to relax restrictions.

School administrators are weighing the risk of opening their buildings to students and staff as U.S. cases have topped 3 million this week. Some universities have announced online-only instruction plans, while others may change their calendars. New York City schools, the nation’s largest public school district, announced a hybrid plan mixing both on-site and online classes.

Trump has accused Democrats of exploiting the pandemic for political gain by refusing to reopen schools and businesses to hurt the economy and his re-election prospects, even as health experts caution against easing restrictions too quickly.

“Too many Universities and School Systems are about Radical Left Indoctrination, not Education,” he said in a Twitter post on Friday. “Therefore, I am telling the Treasury Department to re-examine their Tax-Exempt Status and/or Funding, which will be taken away if this Propaganda or Act Against Public Policy continues. Our children must be Educated, not Indoctrinated!”

It was not immediately clear how Treasury could restrict funds, and the department could not be immediately reached for comment. Most primary and secondary school funding is local.

In their statement, AAP and the other groups urged Congress to provide more money to schools so they could reopen safely, calling the idea of withholding funds a “misguided approach.”

Democrats have said they want students to return to in-person classes but only if it is safe. Trump’s likely rival in the November election, former Vice President Joe Biden, has said online instruction is probably needed for a little while longer.

Even some of Trump’s fellow Republicans have dismissed his heavy-handed push to reopen schools.

Ohio Governor Mike DeWine on Friday said local administrators would decide the best plan for schools in his state and that much of what happens depends on people adopting face masks and other measures now.

“We’re not going to be bullied or threatened by the president,” Maryland’s Larry Hogan, another Republican governor, told MSNBC this week.

Fri Jul 10 , 2020
LOS ANGELES, CA — As the the Aug. 18 start of the school year looms, teachers in the Los Angeles Unified School District, the second largest district in the nation, are saying they don’t feel safe returning to their classrooms during the pandemic, according to the teachers union. The United […] 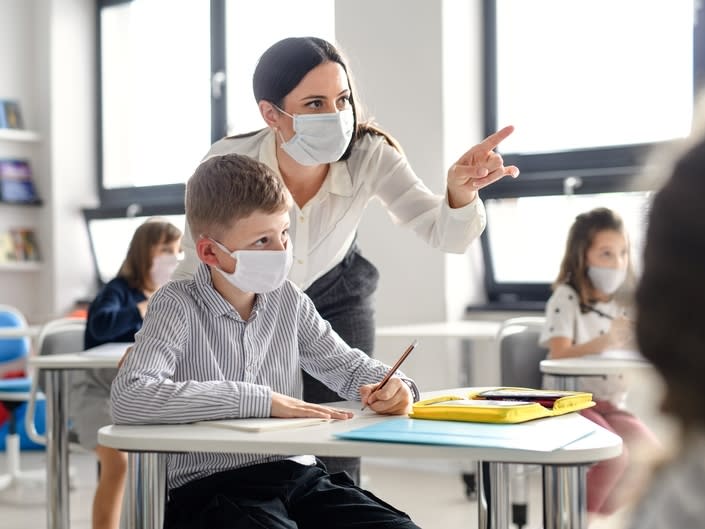