The outbreak of the coronavirus has dealt a shock to the global economy with unprecedented speed. Following are developments Monday related to the national and global response, the work place and the spread of the virus.

— Domino’s Pizza is now offering carside delivery service, allowing customers to stay in their cars while one of the pizza company’s workers delivers their order to them.

The chain said Monday that customers can choose the new contactless carryout option when placing a prepaid order online. It is available in U.S. stores.

When a customer places a carside delivery order online, they’ll be prompted to add their vehicle color, make and model, which will be used to identify them when they arrive at the store. Customers can also choose where they’d like their order placed – the passenger side, back seat, trunk or the option to decide when they arrive.

— The parent company of Burger King, Popeyes and Tim Hortons says sales are improving even though most North American restaurants are only offering takeout and delivery. Restaurant Brands International said Popeyes’ same-store sales — or sales at locations open at least a year — were in the high 20% range in mid-June thanks to its popular chicken sandwich. Burger King’s U.S. sales, which were down more than 30% in March, are now flat compared to last year. Tim Hortons sales are still down more than 15%; about 10% of the brand’s restaurants in Canada remain closed.

SUPPORTING MOMS AND POPS: American Express said it will set aside up to $200 million to help spur spending at small businesses.

The program will consist mostly of a cash-back program for cardmembers. For every $10 an AmEx cardholder spends at a small business, they will get $5 back, up to $50. Like other credit card companies, AmEx codes each of its merchants in its system by size and industry, so the cashback will only work at small businesses.

AmEx is also setting aside $10 million that will go directly to Black-owned small businesses in the form of grants to help address the “challenges they face due to racial and social inequalities.”

— Amazon is paying out $500 million in bonuses to its front-line workers. The company stopped paying a $2 an hour bonus at the end of May.

Amazon said full-time warehouse and Whole Foods workers who were employed by the company in June will get $500, while part-time workers will get $250. Managers will get $1,000. Those who started a package delivery business with Amazon will get $3,000 and their drivers will get the same bonuses as the warehouse workers. Those who delivered packages for at least 10 hours using Amazon’s Flex service will get $150.

— Home improvement chain Lowe’s is handing out another round of bonuses to its workers. The Mooresville, North Carolina-based company said Monday that full-time hourly workers will receive $300, and part-time and seasonal workers will receive $150 in July— matching the funds provided to all hourly workers in both March and May. The new bonuses amount to $100 million in investment to its workers.

— Travelers at Frankfurt airport, Germany’s biggest and a major intercontinental hub, will be able to get an on-site coronavirus test before jetting off.

Fast-track tests providing results within two to three hours will cost 139 euros ($156). Regular tests with results available within six to twelve hours — recommended for travelers who can get tested the day before departure — cost 59 euros.

— Year-round movie theaters, casinos and children’s summer camps reopened in Greece on Monday, while concerts, conferences, commercial fairs and artistic events can once again be held in the latest phase of the country’s easing of lockdown measures.

It marks the first time indoor theaters will be able to operate since the lockdown was imposed in March.

On Wednesday, international flights will be allowed at regional airports across the country. Currently tourists can fly into only Athens or Thessaloniki. Greece has been eager to attract foreign visitors, as tourism makes up a significant part of its economy.

— Germany’s parliament has signed off on a government plan to lower sales tax and provide more money for families that it is hoped will stimulate spending and help the economy as coronavirus restrictions are eased.

The lower house of parliament on Monday approved the plan to lower the country’s value added tax from 19% to 16% for a half a year, starting July 1. A reduced tax for food and other necessities will be lowered from 7% to 5% under the plan.

In addition, lawmakers approved one-time bonus payments of 300 euros ($335) per child to families. The first 200 euros will be paid in September, followed by an additional 100 euros in October.

The measures are part of a 130 billion euro stimulus package proposed by Chancellor Angela Merkel’s government, which also includes financial incentives for electric and hybrid vehicles. They are expected to receive final approval from the upper house of parliament later Monday.

MARKETS: Stocks are rising on Wall Street Monday, clawing back some of the ground they lost last week.

HOUSE HUNT: Home buyers dealing with serious health concerns or other issues can now use a new secure platform to bypass the traditional home selling process during the pandemic.

HomeQuickie.com announced Monday a system that automates the entire home selling process, providing access to the selling, marketing and closing tools that industry professionals use. The program offers full self-service options for a flat $1,495 fee or expert support for a 2% commission on the final sales price.

Mon Jun 29 , 2020
From Men’s Health Joe Wicks, the cover star of Men’s Health UK’s July/August issue, has a lot to teach you. The 33-year-old has seen himself go from a struggling park boot-camp trainer to an in-demand social media personality, YouTube #PEWithJoe phenom, magazine cover model, and so much more. There’s no […] 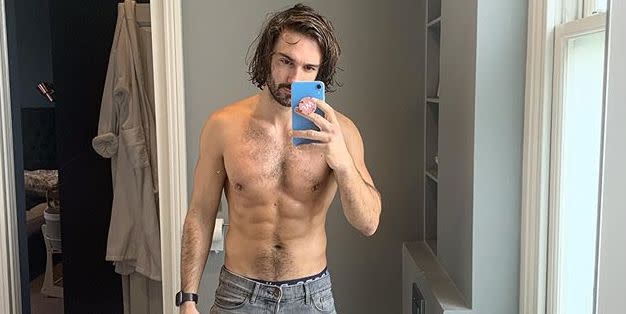