In this week’s roundup from the Association for Unmanned Vehicle Systems International, which highlights some of the latest news and headlines in unmanned vehicles and robotics, Walmart and Zipline partner up for a drone delivery service, autonomous vehicle research in Jacksonville, Florida, USA, and the Winnipeg Fire Paramedic Service embraces drone technology.

Walmart has partnered with Zipline to launch what’s being described as a “first-of-its-kind” drone delivery operation in the U.S.

According to Walmart, the new service will make on-demand deliveries of select health and wellness products with the potential to expand to general merchandise. Zipline’s proprietary technology will be used during the trial deliveries, which will take place near Walmart’s headquarters in Northwest Arkansas.

Operating from a Walmart store, Zipline will be able service a 50-mile radius, which is about the size of the state of Connecticut. Walmart notes that Zipline’s launch and release system not only allows for quick on-demand delivery in less than hour, but it also eliminates carbon emissions, which Walmart says “lines up perfectly” with its sustainability goals.

The operation will likely begin in early 2021. If successful, Walmart and Zipline will look to expand their operations.

Zipline operates the world’s largest drone delivery network. It began operating in late 2016 in Rwanda, with a primary focus on the on-demand delivery of medical supplies. To date, Zipline has safely delivered more than 200,000 critical medical products to thousands of health facilities serving more than 20 million people across multiple countries.

Through a partnership with Beep, Local Motors by LM Industries and Robotic Research, the Olli 2.0 was delivered to Jacksonville in late August. This is Local Motor’s first electric, autonomous, 3D-printed shuttle to be built in the United States. According to JTA, the Olli 2.0 will lead the next phase of the JTA’s Test & Learn activities at Florida State College at Jacksonville’s Cecil Center Campus and the JTA’s Armsdale Test & Learn facilities.

This is the fifth autonomous vehicle that the JTA has tested since it launched its Ultimate Urban Circulator program in 2017. Expected to “transform and modernize” the existing Skyway APM system in Downtown Jacksonville to support autonomous vehicles and related technologies, the multiphase U2C program includes the full conversion of the existing Skyway infrastructure and neighborhood expansions through ground-level connections, creating a 10-mile urban transit network.

“When we first announced our plan to retire the Skyway trains and replace them with autonomous vehicles, the JTA set the goal to keep up with the latest advancements. Receiving the first Olli 2.0 shuttle in the United States is proof of that commitment,” says JTA Chief Executive Officer, Nathaniel P. Ford Sr.

“The delivery of the Olli 2.0 at our Test & Learn track marks the next step in shaping the future of public transportation– not just in Jacksonville, but nationally.”

The integration of the Olli 2.0 with the JTA’s existing Test & Learn program was made possible by Beep’s long-standing relationship as an autonomous shuttle service provider to the JTA’s Test & Learn program, and a recent supplier agreement with Local Motors. Beep will ensure the smooth, safe and seamless operation of the Olli 2.0 in Jacksonville. In collaboration with Robotic Research, Beep will also support the team in extending its knowledge of evolving autonomous vehicle technologies.

Since the start of a pilot program in 2018, the WFPS has deployed its drone at over 40 major incidents, according to a report made public on Monday, Sept. 14. In the report to the city’s protection and community services committee, the service says that the drone “greatly enhanced the ability of the commanding officer to deploy appropriate resources in the right place and to keep crews and the public safe.”

Drones offer a variety of benefits to the WFPS, including being able to quickly locate a fire source using an on-board thermal imaging camera, assist in directing hoses and decrease the time it takes to locate victims in water rescue and search and rescue incidents.

As crews become more familiar with the drone’s capabilities, it will be used more extensively, the fire service believes. In the report, the service says it also wants to add a second drone to its complement “for back-up and training purposes.”

On average, it would take about $50,000 per year to make the drones a permanent feature of the city’s fire-fighting gear. The service estimates the cost would rise to just over $80,000 every second year to pay for new drones, and around $17,000 in the alternate years for maintenance and training. The existing budget for the WFPS would cover the costs, the report says.

Fri Oct 2 , 2020
A man who cared for his grandmother, a dementia patient, since he was a sixth grader is seen in Tokyo on March 16, 2020. (Mainichi/Yuki Miyatake) TOKYO — One out of some 20 high school students in the east Japan prefecture of Saitama said […] 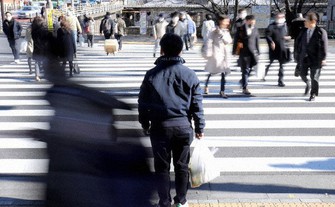