Friends & Family Community Connection, the Rancho Bernardo-based organization that coordinated and led charitable projects at the local, national and international level over the past 24 years, announced via email Friday it is disbanding.

“It has been a great run,” was the July 31 email’s subject line, followed by a “thank you” message for all those in the community who provided “faithful support.”

Per the email, director and founder Phil Harris had given the nonprofit organization his resignation the previous week and the board accepted it “effective immediately.” In addition to Harris no longer being involved with FFCC, the board “determined that the best course of action for FFCC is to begin winding down its operations.”

The organization’s website has been disabled. As of Tuesday night, there was no reply to phone messages left for Harris and longtime volunteer leaders of various FFCC projects. Also unanswered was an email to the FFCC board via an address where the community was directed to ask questions.

The announcement that FFCC is disbanding came just a few weeks after FFCC volunteers delivered essential supplies to the Navajo Nation in Arizona that was greatly impacted by the COVID-19 pandemic. FFCC had announced plans to continue that partnership. A July 7 email also announced FFCC was an authorized agency of the San Diego Food Bank helping local families in need and asked for food donations. Plus, it announced a partnership with another organization to raise over $40,000 for an agricultural microloans program in Haiti, to assist people there experiencing extreme food insecurity.

FFCC was known locally and internationally for its many philanthropic projects. Among its most popular was the food packing events that as of late 2018 resulted in 18 million easy-to-prepare nutritious meals distributed locally and throughout the world, especially in places impacted by natural disasters.

Though volunteers were restricted from traveling due to the pandemic, in recent months FFCC has been as active as ever in the local community, with efforts including food distribution and volunteers sewing homemade masks.

Per an April email, FFCC said it was helping many local families with food resources. Before the COVID-19 pandemic, the group said 750 households in its service area of Rancho Bernardo, 4S Ranch, Poway, Rancho Peñasquitos, Carmel Mountain Ranch, Sabre Springs and other nearby communities were receiving monthly food assistance. The pandemic doubled that reach, with approximately 1,575 households receiving assistance between March 1 and April 17.

The annual Thanksgiving food drive gave complete meals to area families in need. As the project grew in need and contributions, FFCC recently distributed close to 1,000 boxes to families and seniors. The boxes were filled with all ingredients needed to cook a Thanksgiving dinner at home.

Even though FFCC volunteers could not travel overseas, in April the nonprofit still provided food to 40 seniors in Haiti via a local ministry there, per one newsletter.

Its international efforts led to volunteers going to many countries. For example, during 2018 in Tanzania, FFCC delivered medicine to a rural clinic, assisted those in danger due to albinism and helped with job creation. In Haiti, projects included FFCC’s seed bank and Manja Lakay meals (the Haitian version of Fight Against Hunger); FFCC’s Community Health Education & Care Initiative cared for eight teachers, 230 students and 150 parents; constructed the Shepherd House Secondary School; and provided medical and dental care to 1,900 patients plus provided training and teaching opportunities for FFCC’s medical team. Through Ayiti Academy, it sponsored 26 Haitian college students.

Other endeavors included collecting school supplies; coordinating assistance efforts to provide meals and water filters throughout the U.S. and overseas following hurricanes, earthquakes and other natural disasters; and supporting vocational education efforts in Tanzania and Haiti. Volunteers made dozens of mission trips to Tanzania, Haiti, the Philippines and Ecuador, just a few of the many countries FFCC assisted.

From children helping their parents by pouring dry ingredients into a bag during a food packing, to teens hosting food drives at their schools and adults going overseas for stretches of a week to more than a year for mission projects, there was an activity for anyone who wanted to help.

There were also frequent requests for assistance for local families, whether it was a single mother needing help while moving to a family lacking clothing, bedding and other essentials.

While saying it was “amazing” to see all the different ways FFCC impacted the community, “… if we have learned anything this year, it is that things can change,” officials wrote in the July 31 email.

As FFCC winds down its charitable activities over the coming months, “we know this community will be committed to helping those in need regardless if it is under the umbrella of FFCC or not,” officials wrote. They thanked the FFCC community for all it has done over the years and said “… we hope the good work will continue.”

According to the email, FFCC will work with its partners to shift as many of its projects and programs to other groups so locals can continue giving and serving others as they enjoy. There was a promise to provide details in the near future on the transition and how people can continue their service work. Questions can be sent to the board at [email protected]

The organization is no longer accepting monetary donations, but continuing its in-kind food donations for local distribution this month, officials wrote.

When interviewed in August 2016 for FFCC’s 20th anniversary, Harris said he never imagined the impact and growth FFCC would have when in 1996 he decided to help a neighborhood in Rancho Peñasquitos by picking up litter during his commute to work.

That led to Harris having conversations with the residents and learning about their difficulties in providing after-school activities and sports leagues for their children due to work schedules and financial constraints. In response, Harris got some friends together to form a youth basketball league. That led to learning about more problems within the 5-mile area of low-income apartments where 21 languages were spoken and Harris deciding to lead an effort to help the families with after-school programing for the kids plus literacy assistance, job training and other guidance for the parents.

By 2002, FFCC was officially formed as a nonprofit organization based in Rancho Bernardo and its volunteers started looking beyond their immediate area for ways and places to help.

Tue Aug 25 , 2020
COVID-19: Vietnam registers 16 more cases, 16th fatality Vietnam has recorded 16 new cases of community transmission, all closely linked to the current Da Nang coronavirus outbreak, and another COVID-19 death during the past 12 hours. Ten cases have been confirmed in Da Nang city, the epicenter of the outbreak, […] 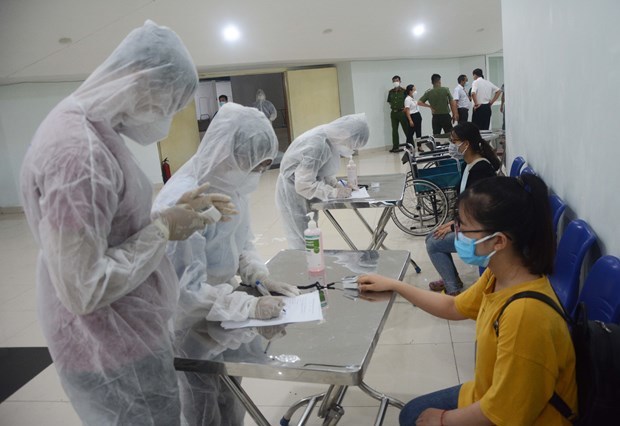