The BBC’s weekly The Boss series profiles different business leaders from around the world. This week we speak to Remi Clermont, co-founder and co-owner of cycling clothing company Cafe du Cycliste.

When Remi Clermont was a teenager, he was embarrassed that his father liked going road cycling.

By road cycling, he means riding around on the type of bike you see in the Tour de France – “drop handlebars” that sweep downwards, and thin tyres.

Despite Remi being born and raised in the Alsace region of eastern France, and road biking being one of the country’s most popular sports, his young self just didn’t like it.

“My friends and I, all the kids, were into mountain biking at the time (the early 1990s),” says the 44-year-old. “Road biking was seen as very boring. I was almost ashamed when I told friends that my dad was into it.”

Little did teenage Remi know, he would go on to catch the Lycra and tarmac cycling bug himself in his 20s. And then, at the age of 33, launch what is today one of the fastest-growing road cycling clothing companies – Cafe du Cycliste.

“You can certainly say I changed my mind,” jokes Remi.

However, before we return to cycling, we need to go to the world of competitive kayaking. Remi took up kayaking when he was nine, and went on to be a member of the French national team for six years in his 20s.

“My speciality was white water kayaking,” he says. “Sadly the discipline is not an Olympic sport, so I never got to go to one of them, but it was great to represent France in international competitions.

“And it was the reason I got into road biking. Because you couldn’t kayak in the winter when it was too cold, I’d cycle to keep my fitness up.”

Then when he retired from the waters port at the age of 28, he kept up the cycling.

As he was not paid for his kayaking, Remi had also needed to hold down a full-time job in his 20s. After getting a business degree from the École Supérieure de Commerce de Paris, he worked in the sporting corporate hospitality sector. This included working at the 2006 Winter Olympics in Turin, Italy.

A year later he got a job in the marketing department of the European arm of a US IT firm.

“I wasn’t a great fit for the role as I knew nothing about IT,” says Remi. “But it had one massive thing going for it – it was based in Nice, which really is cycling paradise. The hills behind Nice [which lead up to the Alps] are just wonderful.”

Remi was soon spending weekends cycling with a workmate called Andre Stewart. Then Andre quit to buy and run a cafe in a small village to the north west of Nice, naming it Cafe du Cycliste.

Two year later, in 2009, Remi also left the IT firm to join his friend at the cafe business. His plan was to design and launch a range of upmarket road cycling clothes that they could sell to all the riders who stopped for a drink and a bite to eat.

Specifically, Remi wanted to produce the cycling jerseys that he says you couldn’t buy in France at the time – plain and understated ones that wouldn’t look out of place in a posh menswear store.

“The only cycling jerseys you could buy at the time in France were racing ones with big logos and sponsors, that made you look as if you were competing in the Tour de France,” he says. “I wanted to produce something completely different.”

There was a catch, however, in that Remi had no knowledge of or experience in the clothing sector. But undeterred, he says he set to work.

“I started to learn everything I could,” he says. “I had some friends in Paris who were working in clothing and fashion, so I got some tips and helpful mentoring from them.

“And I started going to all the trade shows, and asking millions of questions, and contacting plenty of factories in Italy.”

A few months later, a manufacturer in Italy agreed to make Remi’s first design for a cycling jersey, and the fashion side of Cafe du Cycliste was up and running.

Sales from the shop were stubbornly slow, however, so Remi launched a website to target online customers, especially from overseas. With little to no money for advertising, he would send free samples to cycling journalists in various countries.

They would then write enthusiastic reviews, and sales quickly took off, particular in the UK and Japan.

“Cyclists in the UK and Japan were really open to what we are doing,” says Remi. “And that remains the case, still only 10 to 15% of our sales are in France. Many cyclists here still want to look as if they are taking part in a race all the time.”

British cycling journalist and commentator Rebecca Charlton says that brands like Cafe du Cycliste and the UK’s Rapha, Le Col and Assos have led the way over the past decade in offering upmarket, stylish cycling clothing. This has coincided with a big increase in the number of people taking up the sport, leading to booming sales at the firms.

“The trends, cuts and designs of modern cycling kit are a far cry from the extremely limited options I had as a young girl,” she says.

“And the psychology isn’t to be underestimated either – when you’ve got a new cycling outfit you feel that bit more motivated to get out of the door, and you feel good. When it flatters, and fits perfectly, the ride feels more comfortable, and it definitely adds morale.”

Back at Cafe du Cycliste’s head office in Nice, Remi says that recent sales have mirrored the industry-wide increase as a result of coronavirus, with more people taking up cycling either to get some exercise or avoid public transport.

His dad is also a fan of the clothing, which Remi continues to design himself, and is manufactured in a number of European factories. However, his father initially wasn’t impressed back in 2009.

“When I first started out, he wouldn’t wear it, because it was too different to the race jerseys he was used to,” says Remi.

Dimitrov tests positive for coronavirus after playing in Djokovic event

Mon Jun 22 , 2020
Paris (AFP) – Grigor Dimitrov said on Sunday he has tested positive for coronavirus after pulling out of an exhibition tournament which also featured world number one Novak Djokovic. “I want to reach out and let my fans and friends know that I tested positive back in Monaco for Covid-19,” […] 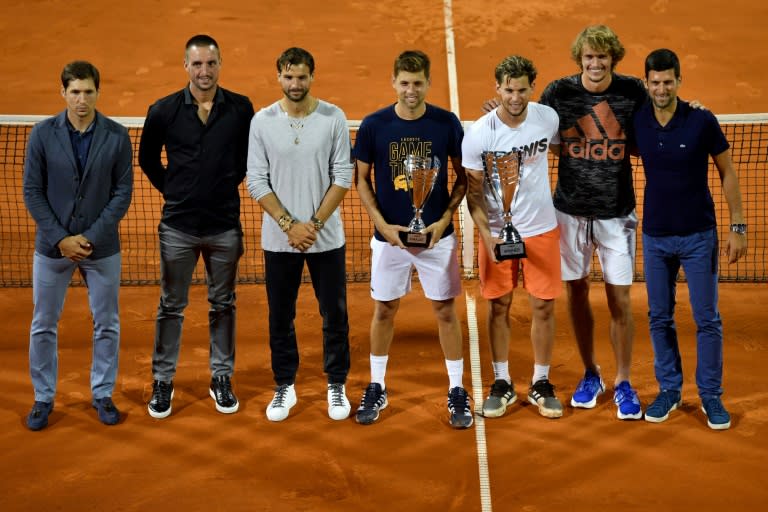