This month, we’re handing the Byte Me reigns over to Grlzwave for a takeover! Enjoy (:

Grlzwave is a feminist multimedia platform from Georgia, created by three friends: Atina, Sopho, and me, Tekla (I’m TNW’s former video producer — you might remember me from my Big Spam takeover on 90’s Georgian music). We fight against stereotypes, dogmas, and inequality.

Grlzwave is all about getting young people to aspire to societal change so they can live in a world free of stereotypes. We’re mostly active on Facebook and Instagram, where we create and share videos, historical photo series, illustrations, graffiti, and other projects, most of which are in Georgian.

Our mission is to educate people on social issues, sexuality, homophobia and transphobia, mental health, and sexism by creating a safe space especially for young women and queer individuals.

This month, we’re launching a campaign that aims to push the government to create a shelter for queer individuals, as there currently aren’t any in Georgia. The pandemic really exposed the urgent need for shelters; many members of the LGBTQ+ community are homeless, as they’re often rejected by their families and kicked out.

For International Day Against Homophobia, Transphobia, & Biphobia (IDAHOT) we filmed a video profiling a same-sex couple called “Love is Love.” Surprisingly most comments were positive, but there were a few insulting ones as well, which were deleted.

We expect insulting comments because generally, Georgia is quite a homophobic country. The first officially sanctioned anti-homophobic demonstration held in Georgia in 2013 was attended by thousands of anti-gay protestors, who were allowed to break through a police cordon and violently chase, beat, and throw stones at LGBTQ+ activists. In 2014, the Georgian Orthodox Church announced May 17th was officially the Day of Family Sanctity — to coincide with and undermine IDAHOT.

In 2019, the first Georgian queer film And Then We Danced came out, pun intended. Levan Akin’s film portrays a love story between two men in Georgia’s national dance ensemble. It was a nominee for a Queer Palm Award, and also won several awards at European film festivals. But it also sparked violent homophobic protests when it premiered in Georgia. During the three days of screenings, halls were full and security at the cinema was tight.

You probably expected a fun newsletter celebrating pride today, but it’s not all rainbows in Georgia. However, there’s hope — the nightlife and techno scene is acting as a safe space for the LGBTQ+ community. We believe in the coming years we’ll also be able to celebrate Pride more openly, and with the help of Grlzwave, change the societal way of thinking and increase acceptance of queer individuals.

Read on for the bloody news, co-curated by Grlzwave and Byte Me!

that’s what she said

Because we’re all magical and unique snowflakes who don’t always agree on feminist issues — and subsequently feel like we’re “bad” women — we’re going to discuss something we found online in each newsletter.

For this month’s that’s what she said, Byte Me interviewed Grlzwave on visibility, brands using the Pride Flag, and how straight people can be better allies. Read the full discussion here, and included the TL;DR below:

Georgina: Grlzwave is a creative platform to get young people to be more open-minded and self-accepting — do you think this is the biggest issue when it comes to allyship? That people aren’t open-minded enough, or empathetic enough, or is it a lack of knowledge?

Grlzwave: Well it’s a bit of both. There is definitely a lack of knowledge, which we try to face by creating educational content in relatable and easy-to-understand language. On the other hand, empathy is a problem because LGBTQ+ members are also “othered” by society, and many stay in the closet their whole lives. Lack of empathy and open-mindedness comes from a lack of knowledge. We believe that knowledge is the power to change the world for the better.

Georgina: And how do you measure the success of Grlzwave? Is it about starting conversations, or changing policy?

Grlzwave: For us the most important thing is engagement and comments/messages that come from our audience. We often get supportive messages, which is the biggest motivation for us to do better and grow. Other than this, starting conversations about issues and interest from other organizations to collaborate with us are also ways to measure our performance.

Georgina: So based on this, what are some things people who want to be an ally to the community should start doing now? And where do straight people most often get it wrong?

Grlzwave: That’s a hard one. There is no instruction manual on how to be an ally, but we think the best way is for people to educate themselves around the topic, and ask a queer person in your environment for advice. Every community in different environments face a different set of issues in their everyday lives — it’s very important to start advocating for LGBTQ+ rights outside of your own “bubble.” Start a conversation with people who are on the verge of being homophobic.

One thing that straight allies often get wrong is that they talk about LGBTQ+ issues from their perspective on behalf of people from the community. For acceptance and visibility, it’s very important to create a platform for members of the community to share their experiences themselves.

Read the full discussion here, and let us know your thoughts as comments!

the best and the worst

This week, Grlzwave shared their advice with us on how to make a change in your community!

“You can be an NGO and find a nonstandard method to create a societal change. You have to speak the language of the audience, not too formal with a sprinkle of humor.”The worst?
“Don’t work on the issues that cause aggression from society. Don’t mention feminism or LGBTQ+ community, or you will lose followers.”

tweets of the month

word of the month: shemomedjama

You know that feeling when you open a pack of cookies and end up eating the whole batch in one go? That’s what Georgians call “shemomedjama.” Pronounced as shemo-med-jama.

Literally it means: “I accidentally ate the whole thing.” But, according to Tekla, the word can be used in other ways, too. You can “shemomedjama” anything that wants to bring you down, anyone who tries to control you.

You want to eat that whole bag of chips? (Or a khachapuri, its Georgian version, a huge loaf of bread filled with cheese with butter and eggs on top) Your body, your choice. Shemomedjama that partner who says you really need to lose five pounds. Shemomedjama that cute bikini that doesn’t come in sizes over XS.

You want to hold hands with your girlfriend in public? Shemomedjama everyone giving you the stink eye, acting like you don’t belong there. Shemomedjama your country’s laws that treat you differently than other people.

You want to become the first woman on the Moon? — yes, men have been going there for over 50 years and we have yet to put the first woman there — shemomedjama teachers who claim math isn’t for girls. Shemomedjama men who believe women are too emotional to become astronauts.

What do you think of Byte Me? Love it? Tell us. Hate it? Tell us — as female journalists we love hate mail.

Mon Jun 29 , 2020
Patti Breed-Rabitoy, with husband Dan Rabitory, had coped with lung and kidney disease for years. She died of COVID-19 with no family by her side, but more than a dozen gathered on a Zoom call to say goodbye. (Elishia Breed) As her mother lay dying in a Southern California hospital […] 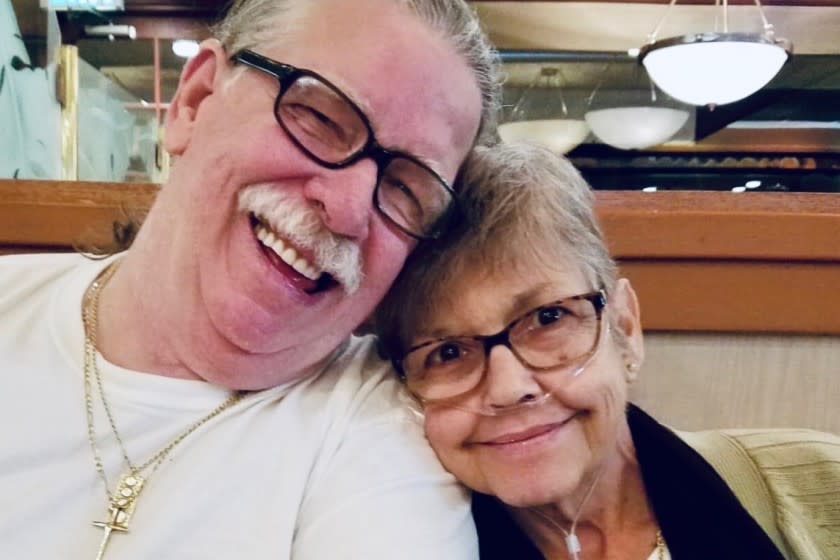