Pregnant women trapped in abusive relationships who are too scared to get a termination at a clinic due to concerns their partner will find out could face jail sentences for buying abortion pills online, campaigners have warned.

Leading charities are urging the government to change the domestic abuse bill to protect pregnant women living with abusive partners.

Women living in the UK still face life in prison for an abortion at any stage of their pregnancy without getting the permission of two doctors – with campaigners noting this is “one of the harshest punishments in the world”. Some have been jailed for taking abortion pills bought online in recent years, despite the World Health Organisation recommending home use of the abortion pill.

Prominent charities and cross-party MPs calling for the law to change argue strict measures outlawing the consumption of online abortion pills at home disproportionately affect women and girls in “abusive relationships who seek illicit medication online” because they are not able to go to a clinic “for fear their abuser will discover their pregnancy”.

Although prosecutions have so far been rare, campaigners raised concerns increasing availability of online pills coupled with obstacles to legal access means record numbers are at risk of criminal proceedings.

Clare Murphy, of British Pregnancy Advisory Service, the UK’s largest abortion provider, which is backing the amendment to the domestic abuse bill, told The Independent: “We are aware that numerous women have been ordering these pills online. A significant number of women who seek those pills illegally are women in abusive relationships. They simply can’t get to a clinic.

“If the use of these pills comes to light, there is the risk a malicious or abusive partner could absolutely refer that woman to the police. These women should not be dragged through the criminal justice system for simply wanting to fulfil their right to abortion.“

She said the abortion pills provided by Women on the Web or Women Help Women, two online abortion providers, are safe to take and exactly the same as what a woman receives if she is treated by the British Pregnancy Advisory Service.

New rules introduced in the wake of the coronavirus crisis allowed women to access abortion medication lawfully at home, but such measures are set to run out and anti-abortion campaigners have been granted a judicial review of the government’s decision to relax abortion regulations.

The Medicines and Healthcare Products Regulatory Agency reports having seized hold off almost 10,000 sets of abortion pills on route to addresses in Britain in recent years.

Women on Web, an online and mail service which delivers abortion pills to women around the world, estimates around one in five women who ask for their support are in relationships which are abusive or controlling.

A domestic abuse victim in need of an abortion told the organisation: “I am in a coercive abusive marriage. I am in the process of making an exit plan and leaving with the two children we already have. I have to be extremely careful because he has to know my whereabouts at all times and I just can’t figure out a way to get to the clinic without leaving a trail.”

Another woman seeking an abortion, who is being subjected to domestic abuse, added: “My family and partner absolutely cannot find out I’m pregnant. I’m terrified. I cannot leave my house except for work as I’m being monitored all the time by my partner and he will go crazy if he finds out I’m pregnant. I cannot stay pregnant please it will ruin my life.”

A domestic abuse victim, also seeking an abortion, said she was feeling able to think about fleeing her abusive partner.

She said: “I struggled to raise my children in an abusive home and since recently getting them all to school age, I feel I am finally at the point to make a break from my controlling and abusive husband. It is not possible for me to leave the house and organise everything via my GP or clinic. If I can’t buy the medication I need, I simply will be stuck in the cycle forever.”

The amendment to the domestic abuse bill is supported by a coalition of charities including the Royal College of Midwives, British Pregnancy Advisory Service (BPAS), Women’s Aid, a leading domestic abuse charity, and the End Violence Against Women Coalition.

Kate Guthrie, a doctor who is a spokesperson for Women on Web, said: “Women clearly in fear of their lives contact Women on Web in desperation seeking a secret but illegal abortion to break the chain of control and or because they say they cannot bring a child into their violent environment.”

Best Beginnings, a charity which aims to give children the best possible start in life, estimates over a third of domestic violence starts or gets worse when a woman is pregnant and 40 to 60 per cent of women experiencing domestic violence are abused while pregnant.

It also estimates more than 14 per cent of maternal deaths occur in women who have told their health professional they are in an abusive relationship.

Marie Stopes UK, a leading abortion service, reports telemedicine rolled out temporarily in the wake of the Covid-19 emergency has been “vital” in meaning vulnerable women can be referred for further support. The charity has seen a 33 per cent rise in domestic violence disclosure during lockdown.

Those backing the amendment to the domestic abuse bill draw attention to the fact abortion laws do not have a “specific offence for violent partners whose actions end a woman’s pregnancy unless it can be proven that they specifically intended to cause a miscarriage”.

“This amendment would strengthen the law to enable the prosecution of partners or family members who cause a woman to lose a pregnancy due to violent attacks – committed through recklessness, or with the intention of ending the pregnancy,” campaigners added.

Andrea Simon, of End Violence Against Women Coalition, which is backing the amendment, said: “Pregnancy is a time of significant risk and harm for victims of domestic violence. Women in controlling or abusive relationships may experience a lack of control of their own fertility and an increased risk of unintended pregnancy and then face additional barriers in trying to access care. These barriers are particularly high for women with insecure immigration status, who already lack protections in the domestic abuse bill.“

Patricia Lohr, medical director at BPAS, added: “On behalf of the 100,000 women our charity cares for every year, I urge MPs to support this vital amendment which would safeguard access to safe, legal abortion care for all women, including those in abusive or controlling relationships.

“Removing the archaic criminal penalty – just as MPs did for women in Northern Ireland – would allow abortion to be regulated in exactly the same way as all other routine medical procedures, enabling clinicians to provide woman-led care that can meet the needs of our most vulnerable clients.”

Why hundreds still make trips from NI and Republic for abortion

Fri Jul 3 , 2020
When the coronavirus pandemic forced schools around the world to stop offering in-person classes this year, more than 1.5 billion kids wound up at home, struggling to learn—with their parents struggling alongside them. For the online learning nonprofit Khan Academy, which is best known for video tutorials for middle- and […] 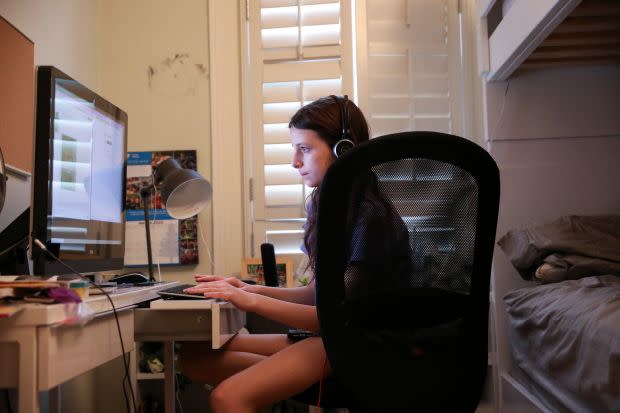