Nearly two thirds of women intend to be more active after the coronavirus lockdown, sparking hope the gender gap in physical activity which has been exacerbated by the pandemic could be closed sooner than expected.

Exercise levels among women have declined at a much faster rate than men during the lockdown, which prompted initiatives such as Sport England’s ‘Join The Movement Campaign’ to help people stay active.

Figures published by the body showed that 42 per cent of women have reported a drop in activity levels during the lockdown, compared to 35 per cent among men.

New findings, however, published on Thursday from leading sports charity Women in Sport show nearly half (46 per cent) of women said that taking physical exercise has become more of a priority in their life during the lockdown.

A further 61 per cent of women also said that they will put more effort into being fit and active once the lockdown is over.

The research, which was based on representative surveys of 100 women aged between 18 and 64 and online interviews with 22 others, points to the reframing of exercise as an important ‘once a day’ activity, having been one of the five legitimate reasons to leave the house when Britain went into lockdown back in March.

But there is also a warning that the decline in physical activity among women during the coronavirus pandemic could still have a deep-rooted impact, with over a third of women (36 per cent) saying that losing their fitness during the pandemic will have a long-term effect.

As gyms and leisure centres prepare to reopen their doors on July 25, a quarter of women also say they are worried that getting back into the habit of exercise after the lockdown would be hard.

And nearly a third (32 per cent) of those surveyed could not prioritise doing exercise during lockdown as they had too much to do for others, shedding further light on how women are being disproportionately affected by the lockdown when it comes to staying active.

Stephanie Hilborne, the chief executive of Women in Sport said: “As we come out of lockdown we should not seek to return to ‘the way it was’, even if this were possible. After all, ‘the way it was’ was not good enough.

“As we reopen schools and leisure centres, and as we reboot sport let’s make sure we better reflect the distinct attributes of women and girls and meet their needs and aspirations in all their diversity and at every stage in life.

“Whilst this research points to negatives for women in lockdown, the great opportunity is that exercise and sport has now grown in importance – we heard that women are changing their mindsets and wanting to prioritise sport and exercise.

“I would urge every working woman, every mother, every carer to hold on to this mindset and value their own needs as well as those of their loved ones. This is good for families and for society and it will help build equality if only the provision is right.”

The overall gender gap had closed before the coronavirus crisis. Sport England’s Active Lives Study, published in October last year, showed record levels of physical activity among adults, with 65 per cent of men and 61 per cent of women reporting to be more active.

That was amid national campaigns such as The Telegraph’s ‘Girls, Inspired’ and Sport England’s ‘This Girl Can’, aimed at changing how women and girls have been statistically less active than men.

Thu Jul 16 , 2020
A gate in front of Los Angeles High School was locked on July 13. (Mel Melcon / Los Angeles Times) More than 50,000 Black and Latino middle and high school students in Los Angeles did not regularly participate in the school system’s main platform for virtual classrooms after campuses closed […] 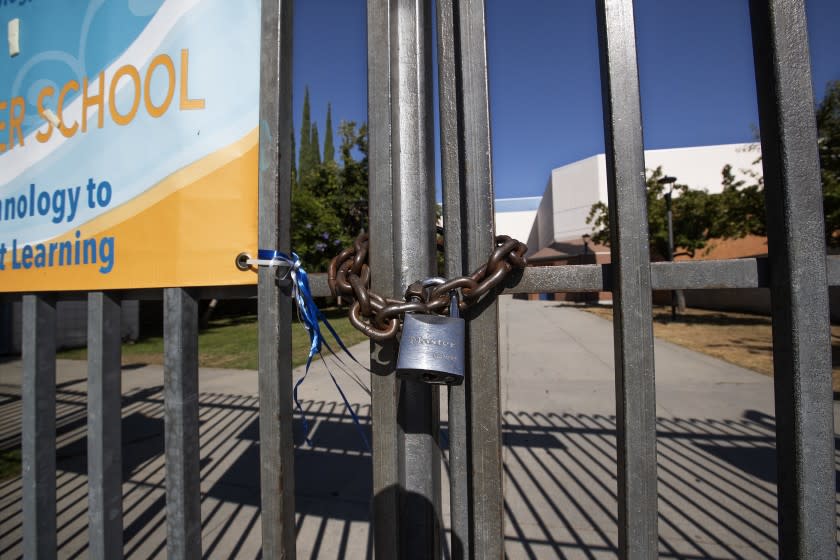