The effects of COVID-19, which necessitate social distancing and nationwide stay-at-home orders, are evident even when it comes to press events. On Monday, Apple hosted its first-ever pre-recorded Worldwide Developers Conference (WWDC). The stream featured some snazzy camera work, and updates to both Apple software and hardware from CEO Tim Cook, SVP Craig Federighi, and various other Apple employees, including a number of women and people of color, the most ever shown in a single keynote presentation from the company.

Aside from the new faces, Apple went on to highlight the newest features coming to its software for its iPhone, iPad, and Apple Watch devices, along with its Apple TV and macOS platforms.

On top of all that, the company announced a long-rumored shift in the hardware that powers its Mac computers—one that echoes a transition it made 15 years ago that set it up for over a decade of success in the desktop and laptop space.

While most of the company’s updates to the operating systems governing its iPhone, iPad, AppleTV, and Mac platforms addressed functional and visual issues long overlooked (and long solved by competitors like Microsoft and Google), its most major hardware change suggested that Apple, as Cook said at the end of the keynote, was still innovating.

Here are the five biggest announcements Apple just made at WWDC 2020:

iOS 14 updates the home screen and organizes your apps

As expected, Apple announced the next version of its iOS operating system for iPhone, iOS 14. The upcoming iOS 14 features a ton of user-friendly improvements and interface tweaks that make popular apps like Messages and Maps more functional, and adds improvements that make information easier to get to without jumping through hoops (or opening apps).

The updated home screen brings the iPhone interface up to snuff with competing Android smartphones. The widgets feature, long found on Android devices, will make it easier for people to glean a little more information at a glance without resorting to opening apps or swiping to another screen to check out their calendar, see different times zones, or take a look at what podcast or song is playing. Widgets are adjustable in size and in terms of the information displayed, and show up on the home screen right next to the rest of your apps.

As for the apps on your home screen—which at this point may span multiple pages if you still download apps regularly—the new iOS 14 will clean up the clutter on your behalf with automatically organized collections. Apps are more cleanly organized by use and category, and features like Siri (and incoming phone calls) are more compact, leaving the majority of your screen visible instead of dominating the entire display.

Apple’s Messages apps has also received a few new tricks to make group messages easier to follow, and talking to the people most important to you more convenient, with threaded messages and pinned contacts. There are even more customization options for Memoji as well, including a face mask accessory.

In terms of completely new additions, Apple’s including a new Translate app that offers close to real-time translations for conversations between two speakers. Apple’s also introducing “Apple Clips”, lightweight versions of popular apps you can quickly use to pay for purchases or use services at participating businesses without downloading larger apps you might not want on your phone.

There are also new features in Apple’s CarPlay automotive interface, including the ability to unlock your car with a compatible iPhone (the feature will be available in new cars next year) and share keys with approved drivers simply by sending them a message.

Now you can sleep with your Apple Watch

Apple WatchOS 7 introduces a few new features, including the long-desired sleep tracking, previously relegated to competing fitness devices or third-party apps like AutoSleep. “We are taking a more holistic approach to sleep by leveraging the devices you use every day to not only track your sleep but to support you in actually meeting you sleep duration goal,” said Vera Carr, Apple’s Health Software Engineering Manager. In WatchOS 7, the native sleep tracking app now takes steps to ensure you get to bed on time and wake up when you want—when it’s time for bed, the watch will dim its display so as to not disturb you, and track your movements and breathing patterns while you’re asleep in order to suss out how long and how deep your sleep is. It will also offer users more options when it comes to wake up alarms.

One of the more interesting and topical additions to WatchOS 7 is “handwashing detection.” It uses the watch’s built-in audio and movement sensors to determine when you’re engaging in a bit of hygiene, then displays a timer on your watch to help you scrub those hands for an appropriate amount of time without cutting any corners. The watch will notify you if you bow out early, and congratulate you when you finish the job.

Other features include the ability to share watch faces online or with friends, and download apps on said watch faces that you may not have installed on your watch or phone. Apple also added workout tracking for dancing, and can detect up to four different styles: hip-hop, latin, cardio, and bollywood.

iPad is making the Pencil essential

The iPad, with iPadOS, is receiving a great deal of the new features found on iOS 14, along with some additions unique to the tablet. In addition to visual updates to its most important apps like Photos and Notes, there are upgrades coming to the way the iPad works with the Apple Pencil, the company’s pressure-sensitive stylus.

macOS gets a refreshing coat of paint and app updates

The Mac has long been regarded as the most neglected platform in Apple’s arsenal. Cautious optimism is returning, thanks to the recent refresh of Apple’s Mac Pro and Mac mini desktop computers, as well as its moves to encourage developer adoption of its “Catalyst” programming tools (used to adapt mobile apps for the Mac). With the announcement of Apple Silicon (more on that below), which can run iOS and iPad apps without much work on behalf of developers, it’s clear to see why.

In the upcoming macOS “Big Sur,” Apple’s made a slew of visual and interface changes meant to simplify the experience of using Apple’s own apps. Big Sur also brings elements found in iOS and iPadOS, like Control Center for easy access to settings like sound and brightness, and new widgets like those found in iOS 14.

The last big announcement at WWDC 2020 stole the show: Apple’s switching from Intel processors to in-house “Apple Silicon” processors. The switch is reminiscent of Apple’s 2005 switch from PowerPC to Intel, and it stands to fundamentally change the way Macs work.

The move came after Apple has spent a decade creating mobile processors for its iPhone and iPad devices; its latest chips boasted performance gains rivaling those of Intel-powered laptops. “With its powerful features and industry-leading performance, Apple silicon will make the Mac stronger and more capable than ever,” said CEO Tim Cook. “I’ve never been more excited about the future of the Mac.”

In addition, Cook presented a two-year road map meant to ease developers’ transition from building Intel-based apps to those running on Apple Silicon chips. And as part of a $500 Developer Transition Kit, programmers will be loaned a Mac Mini powered by the company’s upcoming A12Z Bionic processor.

Cook said Apple would continue to create Intel-powered Macs in the future, though did not specify when the Apple Silicon-powered devices would ultimately replace the Intel machines.

Apple also announced new features for its AppleTV platform, and new spatial audio features coming to AirPods Pro, seeking to simulate the effects of a surround sound system without the extra speakers.

The updated versions of Apple’s operating systems will be made available to consumers in the fall, with a public beta for the software updates scheduled to be released in July.

How TikTok teens trolled the Trump campaign ahead of Tulsa rally

Tue Jun 23 , 2020
Users on the social media app TikTok are claiming some credit for the disappointing turnout at the president’s rally in Tulsa, Oklahoma, over the weekend, after a weeks-long campaign to artificially inflate the number of people registered to attend. The prank may have helped lead the Trump campaign to boast […] 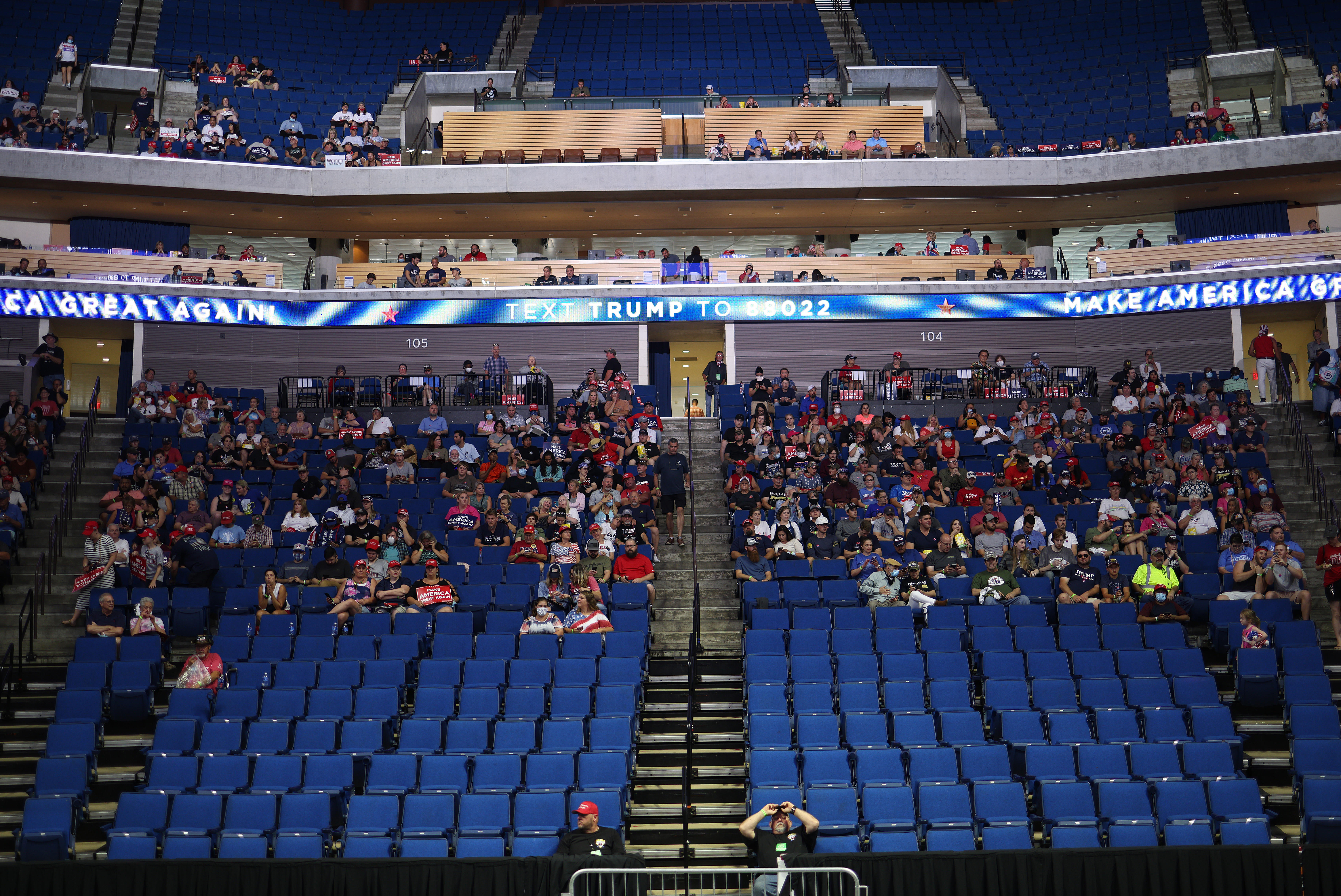