ACROSS AMERICA — At the crossroads of the coronavirus pandemic and civil dissent, some epidemiologists warn that virus infection rates could further spike in the coming days. Their concern has risen about two weeks after Americans began packing city avenues and town streets to protest the Memorial Day death of George Floyd beneath the knee of a Minneapolis police officer.

The protests over threats to black Americans seemed to make many people forget the country is still in the throes of a pandemic. Now, one of the results of the protests may be a stark and deadly reminder that the coronavirus isn’t yet finished with America.

Nearly half of U.S. states saw increases in new coronavirus cases. In a dozen of them, the spikes were alarming. In four states — Arizona, Arkansas, Oregon and Utah — cases more than doubled in a two-week period.

Demonstrations are, by definition, a show of shoulder-to-shoulder solidarity. But that’s the antithesis of the social distancing guidelines still in place in many parts of the country, even as states begin rolling back lockdowns.

The bigger the crowd, the more amplified the message and the louder the voices — and the farther the spread of potentially coronavirus-containing respiratory droplets into the surrounding air.

Even when protesters are masked and march 6 feet apart, as many do, the demonstrations raise a conundrum:

What is the price of protesting in a pandemic?

Another conundrum: What is the price of not protesting?

Given the urgent moral stakes in the call to root out systemic racism in police and every other institution in America, the risk of remaining silent for many protesters far outweighs the risk of contracting the virus.

But in terms of public health, says a Seattle epidemiologist, the price will be steep with a demonstration-driven second wave of the coronavirus.

In the first-ever attempt to quantify the viral threat of dissent, Dr. Trevor Bedford, who studies the spread of the coronavirus at Seattle’s Fred Hutchinson Cancer Research Institute, acknowledges the science isn’t exact.

It’s difficult to get an accurate count of the number of people demonstrating on a given day and the overall health of those protesting, he said. His models also assume that each infected person spreads the virus to one other person on each day of the protest.

None of the scenarios Bedford presented is particularly encouraging. The most optimistic estimates are for 1,500 new infections a day in protests with 600,000 participating.

Completely accurate measures of the effect of protests on the spread of coronavirus may be impossible to obtain because they began as states started rolling back lockdowns and easing some social distancing guidelines, Bedford said.

This week, the United States passed into uncharted territory for any other country in the world by recording more than 2 million confirmed coronavirus cases and more than 113,800 deaths, according to the running global count kept by Johns Hopkins University.

There’s no single reason for the surge in coronavirus cases, but health experts attribute at least part of it to the easing of lockdowns and social distancing measures meant to slow the spread of the coronavirus.

For example, Arizona residents had been cooped up in their homes for six weeks as of May 15 when Republican Gov. Doug Ducey lifted a stay-at-home order and eased restrictions on businesses. Ten days later, Arizona began seeing a surge of new cases and hospitalizations.

“It seems pretty clear to me that what we’re seeing is directly related to the end of the stay-at-home order,” Will Humble, the executive director of the Arizona Public Health Association, told The Associated Press.

There’s single reason for the surges. The lifting of lockdowns and easing of other restrictions has contributed, experts say, but the virus also is moving around into new areas. A spike new cases related to protests won’t show up until this weekend and the days after because of the 14-day incubation period for the virus.

But the virus is also fanning into areas that haven’t been hard hit.

“It is a disaster that spreads,” Dr. Jay Butler, who oversees coronavirus response work at the U.S. Centers for Disease Control and Prevention, told The AP. “It’s not like there’s an entire continental seismic shift and everyone feels the shaking all at once.”

The new cases reported over the past few weeks don’t reflect the swell of demonstration-related infections. The incubation period for the virus is up to 14 days, and illnesses related to George Floyd demonstrations could show up in next week’s numbers. But some new coronavirus cases have already been directly traced to contact at protests.

Some of the 3,400 members of the Washington, D.C., National Guard mobilized June 1 to the protests have tested positive for the coronavirus, though the branch said in a statement it won’t disclose how many “until the risk of infection or illness has passed.”

“The issue of physical separation is important. Masks can help, but it’s masks plus physical separation. And when you get congregations like we saw with the demonstrations, like we have said — myself and other health officials — that’s taking a risk,” Fauci told ABC’s “Good Morning America.” “Unfortunately, what we’re seeing now is just an example of the kinds of things we were concerned about.”

And as the CDC says infections are fanning out across the country, Fauci expects the protests to exacerbate that. Demonstrators are likely to test positive, too, and those who came to the nation’s capital to protest — and the National Guard soldiers from other states — will take the virus home with them.

“It’s the kind of things we were concerned about and, unfortunately, we’re seeing it come true right now,” Fauci said.

The crowds at demonstrations have been diverse in many cities, yet black Americans are twice as likely to die from COVID-19 as white Americans, according to the Centers for Disease Control and Prevention. That could be used as “fodder to those opposing civil rights,” Yale School of Medicine epidemiologist Nathan Grubaugh tweeted, pushing back against Bedford’s modeling.

Governors and mayors are seeking balance in their response to the protest, advising demonstrators to practice social distancing without discouraging civil dissent.

Atlanta Mayor Keisha Lance Bottoms opened testing sites for protesters in her city. Hoboken, New Jersey, Mayor Ravi S. Bhalla said a recent protest in the city “was a powerful statement in the struggle for racial equality,” but asked participants to schedule a COVID-19 test “given the practical difficulties of social distancing at the demonstration.”

Other governors and mayors are acting similarly as they prepare for an onslaught of coronavirus cases, as physical distancing guidelines fall and crowds gather in the thousands.

Those concerns are valid, a group of more than 1,275 health professionals and community leaders wrote in an open letter published online by The New York Times. The letter called COVID-19 “yet another lethal manifestation of white supremacy.”

That makes protests vital to public health and one of the only vehicles available to black Americans to bring those entrenched issues to the public square, they wrote.

Public health officials condemned statehouse rallies to lift coronavirus restrictions as counterproductive to the effort to control the spread of the coronavirus. But those officials also said the George Floyd and Black Lives Matter protests warrant a different, but clear, consistent and anti-racist public health response.

“White supremacy is a lethal public health issue that predates and contributes to COVID-19,” they wrote, outlining the dramatic health disparities between black and white people that “result from long-standing systems of oppression and bias.”

The group offered several strategies to reduce the potential of spreading the virus, including a call for police not to arrest demonstrators, to not hold them in confined spaces and to restrict the use of tear gas and other respiratory irritants that can increase the risk for COVID-19.

But, they wrote, the best thing public health officials can do is prepare for an increase in coronavirus infections in the days following the protests, and provide open access to testing to people in minority communities, “especially when they or their family members put themselves at risk by attending protests.”

In Seattle, Bedford continues to look at different scenarios in his research on the effects of protests on the coronavirus spread and advocate for those raising their voices in dissent at a time when “It feels as though we’ve largely given up on controlling the epidemic and have resigned ourselves to living alongside it,” he tweeted.

“The harms of systemic racism are real and utterly pernicious,” he tweeted. “The hope is that the protests may lead to lasting reform. It is a cruel twist the US’s inability to control the epidemic has made it dangerous to protest entrenched police brutality.”

This article originally appeared on the Across America Patch

Reopening California schools is dangerous. But so is letting kids go a year without learning

Sun Jun 14 , 2020
Sean Brandlin, an eighth grade social studies teacher at El Segundo Middle School, stands in his classroom. (Los Angeles Times) With COVID-19 cases at very low levels within its borders, Israel fully reopened its schools in mid-May. By the end of the month, 130 students at a Jerusalem high school […] 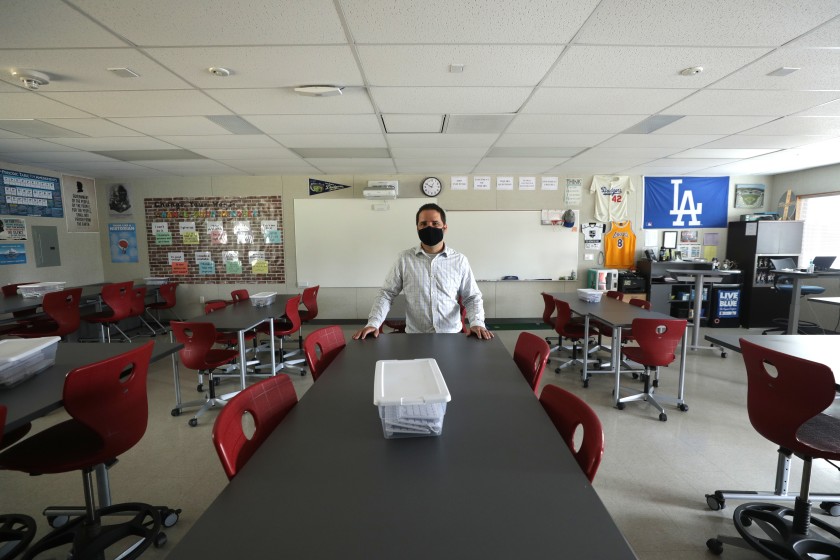