When Kalen Jones worked as a patient advocate last summer, his job was what you’d expect: visit with sick and injured people, ask about their experiences and witness the hustle and bustle of a hospital from behind the scenes.

The 16-year-old will report Monday for another summer’s duty, one of 4,500 teens in Baltimore’s YouthWorks program. But this year, he and the other young people will navigate the unpredictable terrain of work life in the coronavirus era.

Kalen, a rising junior at Baltimore Polytechnic Institute, said he does not know what to expect when he boots up his computer for his first remote shift at the University of Maryland Medical Center’s Midtown Campus.

“It has been a little complicated. But it is still a great opportunity I can take to prepare myself for the future,” said Kalen, who is thinking about a career as a surgeon.

While many cities, including New York, canceled their summer jobs programs once the pandemic hit, Jason Perkins-Cohen and his team at the Mayor’s Office of Employment Development scrambled to re-imagine Baltimore’s.

Social distancing and the resulting economic downtown means YouthWorks will operate this year as a hybrid and employ about 3,500 fewer teens than last year. A small number of the young people will work in person, including in fields such as construction, food service and health care. But most will work remotely.

About a quarter will connect online with a job coach, instead of an employer, for job readiness preparation, career exploration and academic enrichment. The rest of the young people, hired for jobs with nonprofit organizations, private companies and government agencies, will also receive remote learning and skills training to supplement their telework responsibilities.

Perkins-Cohen said the jobs are critical. For many young people, their paychecks will help their families with necessities. The program puts a preference on hiring young people in households that receive public benefits, such as Temporary Cash Assistance and food stamps. Other young people are in foster care. The rest of the applicants are selected through a lottery.

With each young person in the program being paid at least $1,100 for the summer, Perkins-Cohen said, “It is a big deal to them, to their families and to the economy.”

That money comes, of course, at a time when unemployment is soaring, Perkins-Cohen said. And youth unemployment far outpaces the rate for adults. Nationally, the rate for people ages 16 to 24 was 21.4% in May. The rate for the adult workforce in Baltimore in May was about 11%; the Mayor’s Office of Employment Development said an unemployment rate for city youth has not been published since the pandemic hit.

“There are just not as many options out there for anyone,” Perkins-Cohen said. “Youth, who have less experience and less job history, are particularly hard hit whenever we have an economic downturn.

“At a time when we’re losing so many jobs, we have essentially created 4,500 jobs. That serves as an economic stimulus.”

Others see YouthWorks and programs that similarly provide structured, constructive outlets for young people as crucial. Without positive opportunities, some point to the prospect of a proliferation of squeegee kids at Baltimore intersections or a return of sometimes rowdy crowds of teens to the Inner Harbor.

Community leader and youth advocate Ericka Alston-Buck said programs that engage young people over the summer change lives in a city where too many teens have adult responsibilities, where if there are no summer jobs to help pay the utility bill, opportunity may look like selling drugs to keep the lights or cable on.

Beyond money from a summer job, the exposure that comes with community programs teaches kids to consider what is possible beyond “these four walls and these four blocks,” she said.

“People fail to realize that as much as we wish we could have our children do what we say, young people do what they see,” Alston-Buck said.

Cameron Miles said even with the city still shut down, parents call him hoping to find a spot for their sons in his Mentoring Male Teens in the Hood program. Miles and community leaders in other programs that offer mentors, jobs, sports, arts and college preparation weighed options and risks to salvage their carefully made plans to engage and shape young people this summer.

In a normal year, he would have taken a group out of state in June to visit a college campus and nearby cultural sights while giving them the experience of staying in a hotel. He’s pushed the trip off for now, and is engaging the boys, ages 8 to 18, in online learning, essays about how the pandemic restrictions make them feel, Zoom calls and text messages.

“I believe the idle mind is the devil’s workshop,” Miles said, explaining that he tries to give the “Young Kings” in the program mentorship through speakers, trips, sporting events and workshops to prevent them from “becoming prey to negative vices, the negative groups that want to enlist their energies.”

To pull off YouthWorks this year, Perkins-Cohen said his team had to put together the virtual platform and overcome the city’s digital divide by joining the school system in making sure young people have access to the internet and computers.

Youth on the training side of the program will check in with their job coach for one-on-one and group sessions throughout the day. The rest of their time will be spent watching instructional videos, taking assessments, setting goals, practicing budgets, going on mock interviews, engaging in wellness activities and learning about different careers.

The virtual experience is something Perkins-Cohen said his office plans to build on through partnerships with the city schools, potentially engaging kids during the fall, as well. It also will help address concerns YouthWorks employers sometimes have about how ready teens are to join the workforce.

One of this summer’s employers is HeartSmiles, which West Baltimore native Joni Holifield founded in 2015 to give young people opportunities for enrichment and leadership development. HeartSmiles uses social media to bring teens together to discuss everything from self love to gun violence and food insecurity.

Holifield said YouthWorks is a key part of the summer for many kids. The five weeks young people will spend with HeartSmiles as part of the program will teach them important things like leadership, networking and communication, she said. She said the program is “an investment in themselves and their futures.”

YouthWorks participant Ka’Mya Tynes, a 15-year-old rising sophomore at Poly, will work for HeartSmiles reviewing online material for its motivational “Success Sessions” for young people on YouTube. She will also help curate enrichment and leadership for Baltimore’s youth on Instagram.

With the end of the academic year, she went from being aggressively focused on raising her GPA to a 4.7 with advanced placement classes and participating in lots of different activities to empty, endless days. Without structure, Ka’Mya said she found herself staying in bed with the blinds closed, retreating from the world.

“I had so much free time on my hands,” Ka’Mya said. “I really struggled.”

Visit The Baltimore Sun at www.baltimoresun.com

Online school? In-person? How parents are making their own fall 2020 decisions as COVID-19 squabbles continue

Mon Jul 13 , 2020
As officials play political football with K-12 school re-openings, parents such as Johanne Davis are formulating their own game plans for the fall. “To exercise an abundance of caution, I’d like to keep my kids home with me where they’ll study online,” says Davis, a mother of three from Indian Land, South […] 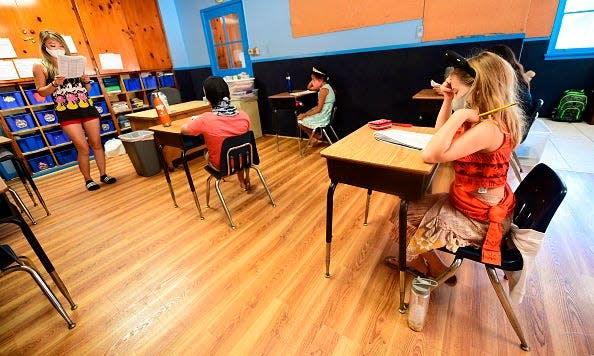