(Bloomberg) — President Donald Trump had looked to his first rally in three months as a reset for his campaign. Instead, the sparsely attended event in Tulsa, Oklahoma is stirring fresh questions about both his strategy and the direction of his re-election bid.

The most evident shortfall from Saturday’s rally was attendance, far smaller than the overflow crowd that the president and campaign officials had promised. Yet, more significantly, in his return to the rally stage Trump struggled to escape the coronavirus pandemic and protests over police brutality, crises that are making it harder for him to focus his arguments on his Democratic opponent Joe Biden.

With the president trailing Biden in national polls and reeling from having failed to deliver his Tulsa rally as promised, the Trump campaign will face new pressure to deliver the boost needed to get his bid for a second term back on track. Trump plans to travel to two battleground states this week for speeches — Arizona on Tuesday and Wisconsin on Thursday — but his campaign hasn’t yet announced another large-scale rally.

“Every campaign always has the challenge of how many announcements can you make, how many reboots can you have, official starts, unofficial starts and this campaign is no different,” said Charlie Gerow, a Republican strategist. “The Trump campaign maybe oversold” the Tulsa rally, he said. “These things are about expectations, and they set them high.”

The coronavirus pandemic has ruined Trump’s best argument for another term — the strength of the U.S. economy, now plunged into recession by lockdowns imposed to curb the outbreak. The Tulsa event had been planned, at least in part, to lift the president’s own morale after broad criticism for his response to the pandemic and the nationwide protests, according to officials familiar with the campaign.

The closest scrutiny may fall on Trump’s campaign manager Brad Parscale, who had tweeted in the run-up to Tulsa that there were more than 1 million ticket requests for the rally. Trump repeated that metric in a Fox News interview, saying it signaled “a hunger for the rallies.” But a spokesman for Tulsa’s fire department said fewer than 6,200 people were in the arena as of 7:30 p.m. on Saturday, far fewer than the arena’s 19,000-seat capacity.

The campaign blamed protesters, claiming they had blocked Trump supporters from passing through security checkpoints. That claim could not be verified, and Tulsa police described the demonstrations as largely peaceful.

Earlier this month, Parscale was called to the White House along with other top political advisers, as Trump’s standing slipped in key battleground states. Before joining Trump’s 2016 run for the White House, Parscale’s only previous political experience had been creating a website for a candidate running for tax assessor of Bexar County, Texas, who ultimately lost.

In the wake of the rally, top campaign officials played up the attention it brought. “As of Sunday morning, more than 8.3 million people had watched the President’s rally online, which doesn’t even count television viewership,” said Tim Murtaugh, a Trump campaign spokesman. “This is an enormous audience that Joe Biden couldn’t even begin to dream of from his basement, and we are eager to continue to highlight the enthusiasm gap.”

In recent weeks, Trump’s campaign has made personnel changes, bringing back Jason Miller, who directed communications during the last campaign. Last month, Bill Stepien, who had been a senior political adviser and 2016 staffer, was named deputy campaign manager. Stephanie Alexander became chief of staff after serving as Trump’s battleground state director in 2016.

Gerow and other Republican strategists, said the Tulsa crowd size could play to Biden’s advantage, in part because of how much Parscale raised expectations. Biden’s campaign quickly seized on the attendance as evidence that Trump’s presidency is in a “tailspin,” due to his handling of coronavirus and the protests in the wake of George Floyd’s death at the hands of Minneapolis police.

“Donald Trump has abdicated leadership and it is no surprise that his supporters have responded by abandoning him,” Andrew Bates, a Biden campaign spokesman said.

Ahead of the Tulsa rally, Trump’s campaign had stepped up its attacks on Biden. On Friday, it unveiled a website devoted to attacking the Democratic nominee for his gaffes, suggesting he lacks the mental acuity for the presidency. The campaign also ran ads in swing states assailing Biden over his record in Washington as a senator and as Barack Obama’s vice president.

During his Tulsa speech, Trump took on Biden on several occasions, at one point suggesting that he has trouble identifying family members. “Do you know what he says to his wife, when he’s not confusing her with his sister?” Trump said.

Trump also sought to tie Biden to instances when mostly peaceful protests against police brutality have turned violent, accusing the former vice president of caving to the extreme wings of the Democratic party and declaring himself the candidate of “law and order.”

Neil Newhouse, another Republican strategist, said that Trump will need to more solidly define Biden for voters ahead of the November election.

“The sooner we’re able to focus on Joe Biden and define him to voters the better chance we’ll have of winning this election,” said Newhouse said. “The focus of the Trump campaign can be less on the president, because voters already know him pretty well, and more on Biden who they don’t” know as well.

Yet, in his Tulsa address, Trump also turned to recent controversies, including speculation about his health after his unsteady walk down a ramp at West Point’s commencement ceremony, and online jokes about why he has appeared to struggle to drink glasses of water without using both hands.

On Saturday, after he was brought a glass of water at the rally lectern, Trump flamboyantly drank it with one hand and then flung it aside. The crowd cheered.

Trump also made a series of racially insensitive comments that serve to rekindle critiques of him. He referred to the pandemic as “Kung Flu.” He said that Representative Ilhan Omar, a Minnesota Democrat, wants to “make the government of our country just like the country from where she came, Somalia.” Last year, Trump was called racist for suggesting that Omar and three other women of color in Congress should “go back” to where they came from.

When he emerged from Air Force One after midnight, following the event, Trump appeared tired. His red necktie was undone, and he had a campaign hat in his hand.

The revelations from Bolton’s book, in particular, complicate Trump’s effort to draw contrasts with Biden on China by using his trade deal with Beijing as an example of being tougher than Biden on the world’s second-largest economy. Bolton asserts that Trump pressed Xi to boost Chinese purchases of U.S. agricultural products to help the president’s re-election prospects in November, a claim Trump has rejected.

Gerow said he thinks the election is still Trump’s to lose, even as polling shows the president slumping, because while most people have formed opinions of him, there’s still a sliver of undecided voters who can be swayed.

“If the president can stay focused on his plans and his ability to rebuild the economy, to restore social stability and get us back to normalcy, I think he wins,” Gerow said. “But if there are a myriad of unforced errors, and that’s when he veers off script, potentially, the equation can change.”

From materials to filters, here’s everything you need to know

Mon Jun 22 , 2020
We have all your questions about face masks answered including how to wash them, masks for children and where to buy them: iStock The coronavirus pandemic has meant that face masks and coverings will become part of daily life. The UK government and the World Health Organisation (WHO) have both […] 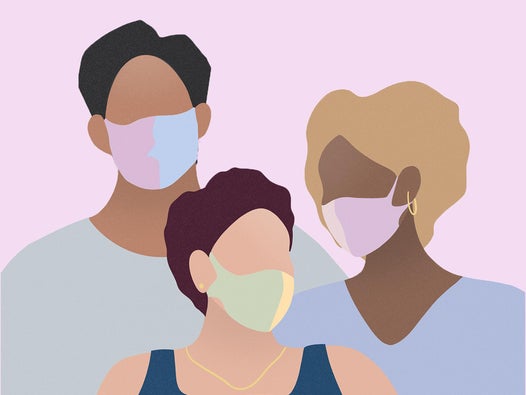