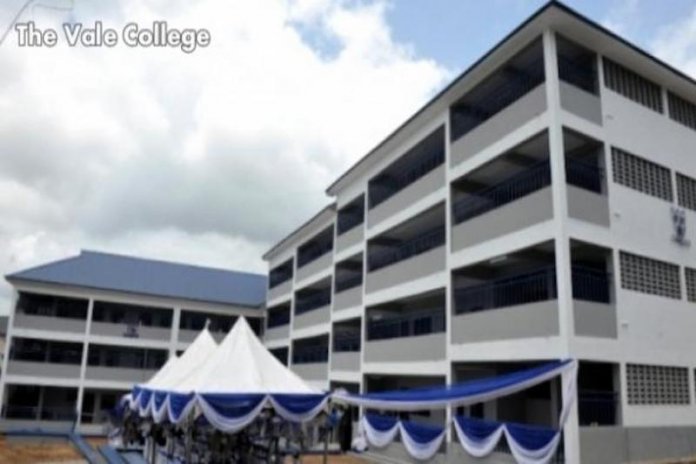 In keeping with its mission to continue to raise stars, in June this year, The Vale Tutorial College, Ibadan, a renowned sixth form college, broke new grounds when two of its finalists excelled in Cambridge Advanced Level, as John Pius-Obayemi, an Atinuke Ige Scholar acquired three A stars. It was a turning point in his life and the lives of others whose sojourn, and quality of education received at the college brought out the best in them. Sunday Ehigiator reports

Serene and neat environment will greet a first-time visitor to the The Vale Tutorial College (TVTC) tucked inside New Bodija in the capital of Oyo State. The gigantic edifice painted in grey and white stands tall in the expansive compound.

To a passerby, it is a citadel of learning, but for its occupants, it is more than a mere academic ground. It is exceptional. It is an upper sixth form college that has propelled its past and present students to excel and climb extra ordinary heights in national and international examinations. The feats made possible through its dedicated leadership and committed teachers.

Founded 10 years ago by Mrs. Funso Adegbola (nee Bola Ige), The Vale Tutorial College, an offshoot of The Vale College is an independent entity established because of the need to prepare students to be better matured for university admission as A-level is a solid foundation and pathway to foreign university and 200 level in Nigerian universities. For TVTC, it has been 10 years of propagating academic excellence.

In June 2020, the college recorded landmark results in its international examinations, as two of its finalists excelled in Cambridge Advanced Level with A stars. John Pius-Obayemi, who is an Atinuke Ige Scholar shone brilliantly with A stars (A* in Mathematics, Physics and Chemistry having the (best result) and Al-Fatihi Abdulmalik also got (A* in Sociology, Economics and Mathematics) achieving second best result.

On August 15, 2020, the school management in compliance with government’s directive to keep COVID-19 at bay, rolled out the drum to celebrate these exceptionally brilliant finalists during a valedictory service held for the graduation class of 2020 at the college premises.

“I feel the aims and mission of TVTC are being achieved- it is a journey not a destination, and we are definitely on the right path. The vision was to provide an enabling environment for lifelong learning, training and nurturing leaders with the right kind of values,” said an elated Adegbola.

On what makes TVTC different from other sixth form colleges, Adegbola said it is a combination of many factors. According to her, TVTC is a place where students are well grounded. “We do an excellent job with our students achieving high grades and we have first-rate, comfortable hostel facilities. We are not just a centre, we are a full-fledged school. It is a safe and serene environment, extremely conducive to learning where parents do not have to worry whatsoever about the well-being and safety of their children. Here, students have leadership training sessions every weekend; there are sessions on character development and there are mentoring sessions between the alumni and the current students.”

She added: “Students have entrepreneurship training at weekends, they also learn different skills like bead making, make-up, fashion designing among others, there is close inter-personal relationship between the parents and the school, students have days off to have a social interaction with the director who they see as a role model. Selection of the best student in character and learning every session, low student-teacher ratio, one to one and effective online classes especially during COVID-19.”

Throwing more light on Atinuke Ige Scholarship, which has continued to bring succour to brilliant students from public schools in Oyo State, Adegbola said it is a way of giving back some of the values she imbibed from her late parents. “I started the Atinuke Ige Scholarship in 2013 for students who finished their WAEC in public schools in Oyo and Osun States. One of the cardinal points of my father’s party then, Unity Party of Nigeria (UPN) was free education for all at all levels. My parents believed in education not for their only biological children but education of other people’s children. They have three biological children but raised over 300 children. I just thought I cannot do free education like my father was able to do when he was governor. I know my mother too gave scholarships to people while she was alive.

“About seven years ago, I started with Justice Atinuke Ige Scholarship for brilliant children in public schools in Oyo State who had completed secondary school and were given opportunity to do their ‘A’ Levels at The Vale Tutorial College so that they can go to second level in Nigerian universities. It is worth N2.5 million for each winner. The programme has been successful since we started. The past winners of a male and female, Boluwatife Adewale and Maryam Adeyanju are currently in University College Hospital studying Medicine and Surgery. Some of our alumni are studying in England apart from those in Nigeria. I believe in the vision of quality education for all Nigerian children, irrespective of their backgrounds.”

Few years ago, Adegbola started an annual scholarship scheme in memory of her late father, Bola Ige for children in public schools. Every year she awards scholarship to the best boy and girl through examinations: written and oral. The best two gets scholarship worth N12 million for the six years post- primary education.
The scholarship has transformed lives. For instance, the N12 million awards have benefitted pupils whose parents are bricklayers, tailors, bread sellers, among others.

As the upper arm has continued to churn out excellent students, its sister arm, The Vale College, founded 26 years ago is a record breaker. Apart from excelling in WAEC and its equivalent examinations, the school has continued to exhibit its academic prowess with students who have become Nigerian ambassadors and global icons.
One of its former students, Yewande Akinola got an award from Queen Elizabeth II of England in 2012 for being one of the best female engineers under 30 in the whole of United Kingdom. There are also a number of students who made first class in Pharmacy, Law, Accounting, among others.

At the recently released 2020 Joint Admissions and Matriculation Board Examinations (JAMB) results, seven of its students made the nation proud as they scored far above 300 out of 400 marks. For instance, Toluwanimi Soladoye 351; Andrew Alao 341; Mubarak Titilola 341; Kofo Oyeniyi 333; Lekan Adekanmbi 326; Oladele Omogboyega 324 and Bimpe Olukolo 309.

Still basking in the euphoria of his attainment, Obayemi, a former student of Command Day Secondary School, Odogbo, Ibadan, who is not new to winning academic laurels having scored 6As, 1B and 2Cs in his WAEC examinations, commended Adegbola for the scholarship. According to him, “coming top in my examinations, I felt very elated, I was proud of myself because it was a bit more than I had expected. I knew that these results were good enough to make everyone proud and get me into very good universities. Initially, I got a bit discouraged about achieving those scores later when we started coursework, but I put in my best. TVTC impacted my academic life. The teachers there are also very good and experienced and I am able to say that my academic strengths have been developed and advanced.
“After this, I plan on seeking for international admissions into universities and scholarships to study Electrical and Electronics Engineering.”

On the next step for TVTC, Adegbola stated: “The reward of good work is more excellent work. Ten years is only the beginning, God has been faithful and we trust Him that the next 10 years will see increase and enlargement on all sides of TVTC- numerically, physically, spiritually and materially. In 10 years, our alumni would have become leading experts in their chosen fields and they will be mentoring the future students of the college, by God’s grace.”

Thu Aug 27 , 2020
Following Governor Andrew Cuomo’s announcement on Monday that gyms can reopen next week at 33 percent capacity, the Erie County Department of Health announced that it will be providing inspections to local facilities that are seeking to reopen. © Provided by WGRZ-TV Buffalo Gyms Allowed To Reopen At 33 Percent […]