As her mother lay dying in a Southern California hospital in early May, Elishia Breed was home in Oregon, 800 miles away, separated by not only the distance but also by the cruelty of the coronavirus.

Because of the pandemic, it wasn’t safe to visit her mom, Patti Breed-Rabitoy, who had entered a hospital alone, days earlier, with a high fever and other symptoms that were confirmed to be caused by COVID-19.

Breed-Rabitoy, 69, had suffered from lung and kidney disease for years but remained a vital, bubbly presence in the lives of her husband, Dan Rabitoy, and three grown children. She was a longtime church deacon and youth leader in Reseda, a fan of garage sales, bingo games and antique dolls. Then came COVID-19, probably contracted in late April following one of her thrice-weekly dialysis sessions. Now she lay sedated and on a ventilator, her life ebbing, with no family by her side.

“I had seen these things on TV, and I would pray for those people and say, ‘I can’t imagine what they’re going through,’” said Breed, 44. “And now I was living it.”

A single mom of two young boys, she was wrenched with guilt at not being with her mother. “You always picture you’re going to be right by your parent’s side,” she said.

Unlike many families of dying COVID-19 patients, Breed and her family were able to find some comfort in her mother’s final hours because of the 3 Wishes Project, a UCLA Health end-of-life program repurposed to meet the demands of the coronavirus crisis. In the U.S., where more than 120,000 people have died of COVID-19, it’s part of a wider push for palliative care during the pandemic.

At 5 p.m. on May 10, Mother’s Day, before Breed-Rabitoy’s life support was removed, more than a dozen family members from multiple cities and states gathered on a Zoom call to say goodbye. John Denver’s “Rocky Mountain High,” one of her soft-rock ’70s favorites, played on speakers. Online, a chaplain prayed.

Breed-Rabitoy had been deeply sedated for more than a week, since a terrible night when she struggled to breathe and asked doctors to place her on the ventilator. Confusion abounded, Breed said. Could her mom still hear in that state? Two nights in a row, Breed asked nurses to prop a phone near her mom’s ear.

“I prayed with her. I sang her favorite songs. I read her the Bible,” she said.

Finally, a nurse gently explained that her mother was too sick to recover. If they removed the ventilator, it would be to allow her to die.

That’s when hospital staffers described the 3 Wishes program and asked whether the family had any personal requests for her last moments. They decided on the music and the family Zoom call. Dan Rabitoy requested that a nurse hold his wife’s hand as she died.

After it was over, family members received keychains stamped with her fingerprint and a copy of the electrocardiogram of the last beats of her heart.

“I’m grateful to have these keepsakes,” Breed said. “All these things have been healing.”

The project was developed in Canada but co-launched at UCLA Health in 2017 by Dr. Thanh Neville, an intensive care physician who serves as 3 Wishes’ medical director. It aims to make the end of life more dignified and personalized by fulfilling small requests for dying patients and their families in the ICU.

Before COVID-19, the program had granted nearly 1,600 wishes for more than 450 patients, nearly all in person. The deathbed scenarios have varied, from music and aromatherapy at the bedside to meeting a patient’s request for one last mai tai cocktail.

“We’ve done weddings and mariachi bands and opera singers and 20 to 30 family members who could come in and celebrate,” said Neville, 41. “And none of this is possible anymore.”

COVID-19 has “changed everything,” said Neville, a researcher who focuses on improving ICU care for the dying. Also a clinician, she spent weeks this spring tending to seriously ill COVID-19 patients. Since March, her hospital system has seen more than two dozen COVID-19 deaths.

In the beginning, visitors were strictly prohibited. Now, some may come — but many don’t.

“I would still say the majority of COVID patients die without families at their bedside,” Neville said. “There are a lot of reasons why they can’t come in. Some are sick or old or they have small kids. A lot of people don’t want to take that risk and bring it home.”

It has been hard to keep 3 Wishes going during a time when in-person memorials and celebrations are banned and infection control remains the primary focus. Neville even had to change the way the fingerprint keychains were made. Now, they’re treated with germicidal irradiation, the same method that lets healthcare workers reuse N95 masks.

The 3 Wishes Project is offered when death is imminent: Patients are enrolled after a decision has been made to withdraw life-sustaining technology or if the chance of death is greater than 95%. The program was created to help patients, caregivers and clinicians navigate the dying process in a less clinical, more humane way. Wishes needn’t be limited to three, and they can be articulated by patients, family members or hospital staffers.

The program is based on palliative care tenets that focus on the humanity of the patient amid intensive medical care, said Dr. Rodney Tucker, president of the American Academy of Hospice and Palliative Medicine. Seemingly small acts that honor an individual life help counter the efficiency-driven environment of the ICU, which can be dehumanizing. They’re at the core of care that has been shown to ease both angst for the dying and grief for those who loved them. “It helps the family that’s left behind cope more successfully with the loss,” Tucker said.

Such efforts also remind providers of the humanity of their practice, which can help them cope with the stress of witnessing death daily, especially during something as extraordinary as a pandemic, he said.

A study published by Neville and colleagues last year found that 3 Wishes is a “transferrable, affordable, sustainable program” that benefits patients, families, clinicians and their institutions. They calculated that the mean cost of a single wish, funded by grants and donations, was $5.19.

Genevieve Arriola, 36, has been a critical care nurse for eight years. When the pandemic struck, she found herself juggling medical care and emotional support more than ever. She took care of Breed-Rabitoy for three days straight, all the while communicating with the dying woman’s family.

“This was a very delicate situation for someone who is married to her for over 20 years and a daughter who was miles away in Oregon and couldn’t see her mom,” she said.

She was also the nurse who held Breed-Rabitoy’s hand as she died.

“I pretty much felt honored to be that person,” Arriola said. “I couldn’t let her be alone. If no one can be there, I can.”

Weeks after her mother’s death, Breed is grappling with the loss. The last time she saw her mom was March 16, at a McDonald’s off Interstate 5 near Grants Pass, Ore.

The pair met for less than 30 minutes before Breed-Rabitoy headed south down the interstate, her long-planned family visit cut short by concerns about COVID-19. She had just learned that the local dialysis center was closed to outside patients, and she was worried about growing reports of infection and death. “She told me, ‘I feel like this disease is coming after me,’” Breed recalled.

Now, the keepsakes from 3 Wishes are placed where Breed can see them every day.

“It added such a level of love and dignity we weren’t expecting,” she said. “It made the process of losing a loved one to COVID-19 so much more bearable.”

Kaiser Health News is a nonprofit news service covering health issues. It is an editorially independent program of the Kaiser Family Foundation that is not affiliated with Kaiser Permanente.

'Yoga is very much whitewashed. We need to make sure we make it as diverse as possible'

Mon Jun 29 , 2020
Women’s Sport Social Embed More I had a good relationship with sport growing up. I come from a sporty background, my mum is a fitness instructor and personal trainer. I used to take part in lots of different sports, from dancing, ice skating, swimming and judo. I’ve got two brothers […] 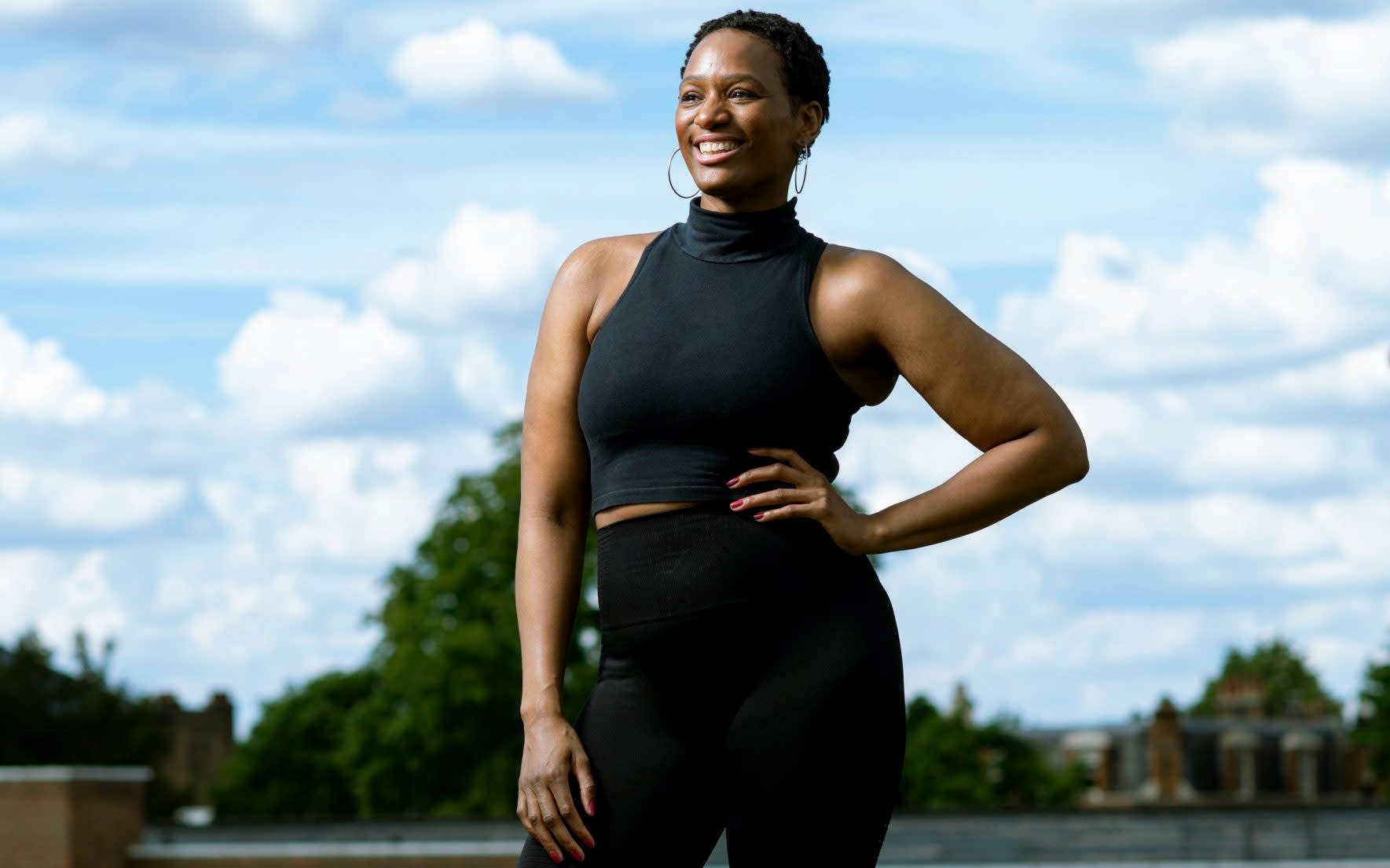