Face coverings are now mandatory on public transport in England, to slow the spread of coronavirus as things start to come back to normal. But wearing a face mask presents a couple of annoying problems: taking a sip of water on a hot train is tricky, as is keeping your make-up neat underneath. Read on below for some answers.

How to stop your glasses steaming up

Wearing a mask can cover more than your nose and mouth: water vapour from your breath can get funnelled upwards and cloud your glasses, making it difficult to see.

Alisdair Buchanan, the owner of Buchanan Optometrists in Snodland, Kent, has a couple of tips to stop this happening. The first is to stop your glasses from coming into contact with moisture in the first place, by sealing the top of the mask to your face with micropore tape.

Some masks will have measures to close this gap built in, he says, so look for ones with foam under the mask, or a moldable metal insert. “Many have metal bits over the nose and most people don’t push that down, which will solve a lot of the problems with fogging”, he says.

If that doesn’t work, there are anti-fogging products which can help, like sprays and special lenses. “The lens and cleaner work in a similar way by absorbing a little bit of the moisture to avoid steaming up and letting go of it when it’s not steamy”, he says. “They also create a smoother surface on the lens so condensation can’t adhere to it.”

It can feel a little dispiriting to take care over your hair and make-up, then to have it messed up by a face mask. Adele Colby, a make-up artist based in Henley-on-Thames, Oxfordshire, recommends starting with “a good waterproof, sweat-proof primer”, before applying a long-wear foundation. If possible, avoid liquid foundation and try something powdered. After that, use setting powder which will need to be “a little heavier than usual” to protect make-up from your mask. Finish with a setting spray.

It might even be worth finding a make-up friendly mask. “I prefer the circular builders’ masks”, says Colby. “You don’t sweat as much in those ones – they’re better ventilated and they’re not as flush on the face.”

For your hair, Margret Magnus, a make-up artist and hair stylist who works internationally, recommends keeping longer styles out of the way. “It’s probably best to have the hair off the face as the more the hair is on the face the more it will get caught”, she says. “Try a half-up half-down style or a low bun.”

Also take care when choosing facial jewellery. “Some metals (such as copper and silver) are more hostile substances for the virus, while others will enable the virus to live longer. There does not appear to be any scientific evidence to suggest there is a greater or lesser risk [for wearing facial jewellery]. However, anything that reduces how tightly a mask fits around the face is going to limit the already limited effectiveness of the mask.”

Men may also find their toilettes disturbed by face masks. Long beards and styled moustaches may be at risk of mussing unless care is taken, says Magnus. She recommends trying some products to keep facial hair in place, particularly a beard wax, which will do so without being greasy. “I don’t recommend oils as that will make the mask messy”, she says.

“For longer beards, combing it and keeping it neat would be best too”, she says. “I’ve even seen some guys who braid their beard.”

If you have an extra-long beard that extends far past your chin, then think about the style of face mask that you are wearing. You might benefit from wearing a longer mask that’s specifically meant for men with beards, which drops down much lower than a typical model. Independent craft stores are selling them online for around £16. If you are a fan of a Poirot moustache or a French fork beard, take care when donning and doffing your mask so it doesn’t get messed up.

When the pandemic began, many smartphone users found that they could not get past their phone’s facial recognition system – which looks for markers like the spacing of a person’s eyes, the size of their forehead, and the length of their face – while wearing a facemask. And given that the average Briton spends more than a day a week on their phone, scientists say it is important that you do not simply remove your mask whenever you need to send a message.

Last month, Apple tweaked its system to help its customers use their phone with a face covering.

“Using facial recognition on phones has become harder thanks to facemasks, although companies have been updating their software,” says Matthew Field, a Telegraph technology reporter. “For iPhone users, download the latest version of iOS (13.5). When you try and open the phone with FaceID, simply swipe up to bring up your phone pin instead. On Android, the best solution for now is to use an alternative unlocking method. Consider using a fingerprint scanner, or adding a strong, six digit pin, instead of facial unlocking.”

As we head into summer, many of us are dusting off our BBQs and inviting friends over for garden parties, or eating picnics with friends and family in the park – both of which are now allowed under Government rules.

But what to do with your mask while you eat?

It might be tempting to put the mask back on between every bite. But Jade Flinn, of the Biocontainment Unit at Johns Hopkins School of Medicine, Maryland, says this might increase the risk of passing virus particles from the outside of your mask to your hand. Instead, she advises removing the mask at the beginning of your meal, and storing it in a “clean receptacle” like a plastic or paper bag – so make sure to bring one with you.

One restaurant chain in Hong Kong, where the hospitality sector is beginning to open up, now routinely provides its diners with clean bags in which they can store their masks while eating.

How to avoid over-heating

Wearing a face mask in hot weather makes it more difficult for cool air to reach the lungs, allowing heat to build up inside the body, and doctors are concerned that widespread use of masks under sweltering summer conditions could trigger dehydration. Your face has more nerve fibres than your other parts of your body, meaning it is more sensitive to heat and cold.

Last month, during a heatwave in central Japan, doctors issued a warning about the increased risk of heatstroke and heat exhaustion while wearing a mask, urging people to drink more water and take more rest.

But the mask itself can also make a difference: Carrie L. Kovarik, an associate professor of dermatology at the University of Pennsylvania, advises using a mask with an adjustable tie so it is not too tight. This gives you more room to breathe, and reduces the urge to touch your mask to adjust it. If you are making your own mask then you should try using cotton, because it helps airflow.

Mon Jun 15 , 2020
TUCSON, AZ — As several infernos burn across Arizona, the U.S. Forest Service is warning that the combined health risks of wildfire smoke and coronavirus shouldn’t go ignored. In a document released earlier this month, the agency said that the viral outbreak”complicates public health response to wildfire smoke.” “People who […] 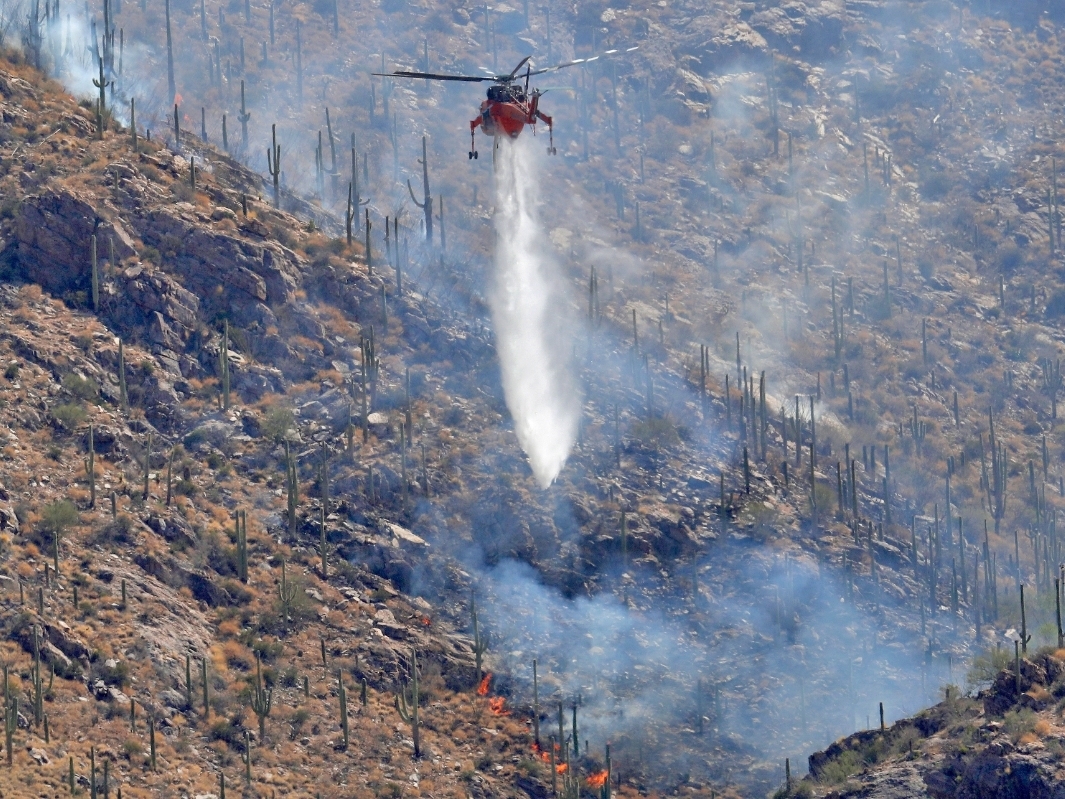