So you’re going to need a mask. The trouble is that wearing one isn’t easy or pleasant. It can feel claustrophobic, anonymising, steamy. The Government waited so long to mandate mask-wearing (they have been compulsory when on public transport and while shopping in Germany since April) that many people remain sceptical of their efficacy, as well as annoyed that they have to wear one at all.

To flip the social norm from not wearing masks to wearing them, the Government will need strong enforcement of the new law. And the support of some well-positioned maskfluencers.

A maskfluencer, or mask influencer, can be anyone who makes mask-wearing look appealing enough to nudge us towards covering up. The Queen and Sir David Attenborough have been floated as ideal maskfluencers – public figures beyond reproach, who can sway the attitudes of a nation. Just think of what Attenborough did for plastic.

Who else would get the most people to mask up? Celebrities, says Tory Burch. The American fashion designer launched a social-media campaign encouraging her high-profile friends to post masked selfies. So far, Jennifer Aniston, Kerry Washington and Julianne Moore are among the dozens that have answered Burch’s call to #WearADamnMask.

In the fashion world, insiders like Instagram’s Eva Chen are waving the flag for mask-wearing. Almost daily, Chen shares photos of herself getting ready to leave her New York flat dressed in a stylish mix of streetwear, luxury accessories – and masks like the bright-patterned, bow-adorned designs from New York brand Collina Strada. They cost $100 (because what better way to make mask-wearing aspirational than to make it out-of-reach expensive?).

And Sarah Jessica Parker is running her own one-woman mask-and-marketing campaign. She’s tied a silk scarf around her hair (Amber Heard-style) for photo ops and stockroom management at her new SJP Collection flagship store in New York City.

She’s certainly attracted attention; much of it in the form of online jeering rather than cheering. The problem with celebrities is that they can alienate as big a constituency as they bring on side.

And mask-wearing has become a political issue rather than a purely public-health one. Especially in the US, where House Speaker Nancy Pelosi matches her many patterned masks to her suits, and where President Donald Trump resisted wearing one (and mocked Democratic rival, Joe Biden, for doing so) until this weekend. His daughter, Ivanka Trump, has become an especially diligent mask- wearer. If maskfluencing were a science, then her adherence should bring mask-shunning members of Trump’s base around to the idea of covering their faces; instead, they’re laughing at her. Whether the laughter dies down now that Trump has worn his first mask remains to be seen.

What Ivanka is doing is normalising mask-wearing, not necessarily bringing the mask-averse on-side. A truly compelling maskfluencer would be one who could turn around recalcitrant anti-maskers with one wear. Which is why a Government adviser’s suggestion that The Queen and Sir David should be encouraged to pose in masks to promote mask-wearing is so spot-on. “I’m surprised how little use has been made of role models,” said Professor Robert West of the government’s SPI-B behavioural science advisory group.

The Duke of Cambridge and Countess of Wessex have both worn masks for public engagements. European royals including Queen Mathilde of Belgium, King Felipe and Queen Letizia of Spain and Queen Maxima of the Netherlands have all gone about their duties with face coverings. So there’s precedent, but none of this mid-level royal maskfluencing could approach the scale of a statement from the very top.

Social psychologists say it takes an average of 66 days (not the often miscited 21) to form a new habit, so most of us are still in the early days of acclimatising ourselves to masks. Only a third of Britons have worn face coverings regularly, compared with as many as three quarters of the citizens of Italy, France and the United States, where governments mandated mask-wearing months ago.

Having the right people wear masks in public could be just the thing to nudge people to pop one on. Convince enough of us, and the very British abhorrence of being conspicuous will do the rest – which could make picking up a mask on the way out of the door as automatic as grabbing your keys, phone and wallet, or as standard as clicking into a seatbelt.

So please, Your Majesty (and the Duchess of Cambridge, and David Beckham, too), wear a mask. Your country needs you to.

Tue Jul 14 , 2020
Shoppers on Regent Street today, as the Government confirms that it will soon be mandatory to wear a face mask in shops. – Dominic Lipinski/PA Coronavirus Article Bar with counter .. Police have raised concerns that enforcing face mask rules in shops is “unrealistic and unfair,” if shoppers refuse to wear face coverings […] 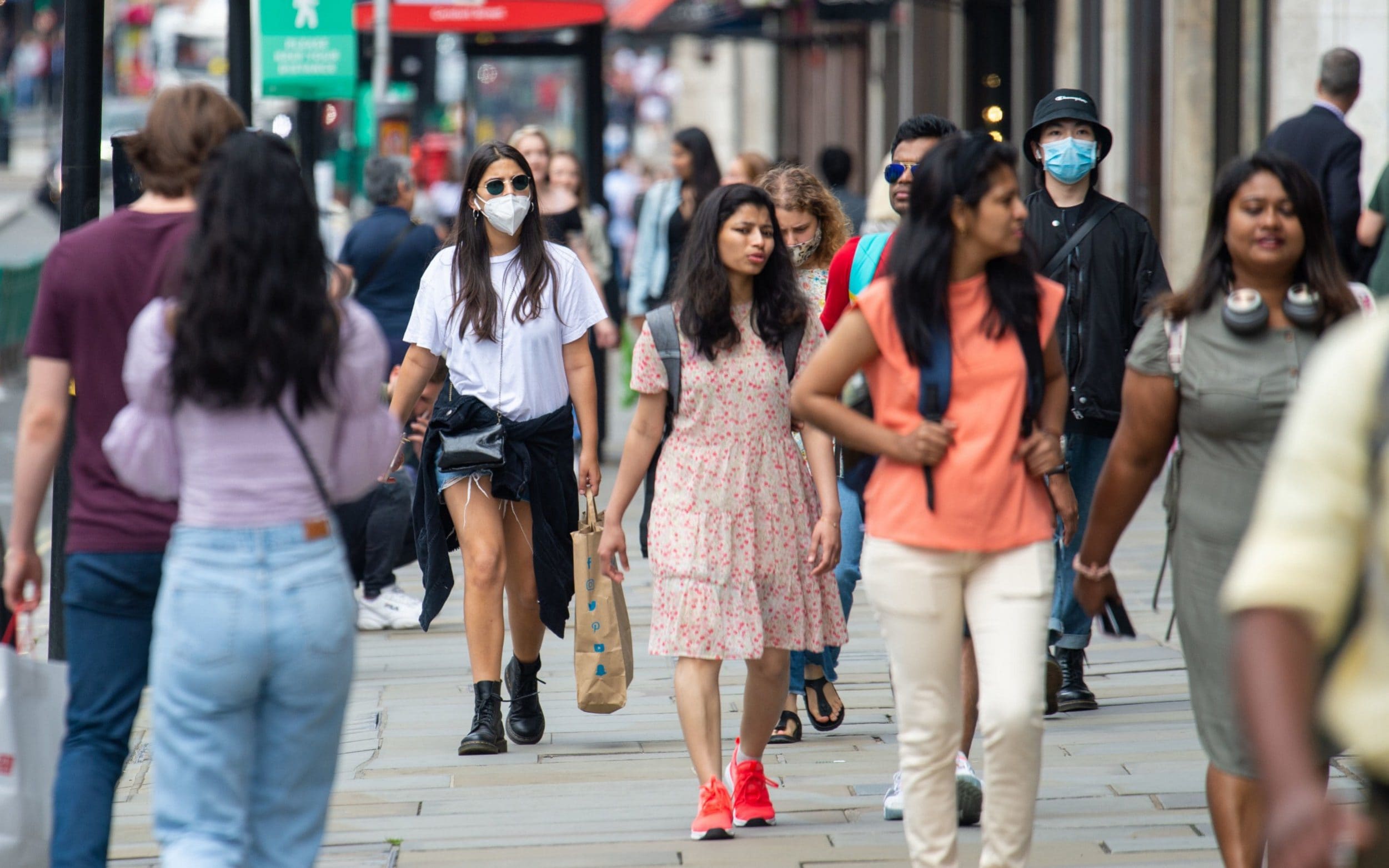