My Money is a series looking at how people spend their money – and the sometimes tough decisions they have to make. Here Priya Aiyer from Canterbury in Kent takes us through a week in her life during the coronavirus pandemic.

Priya is 29 and works full-time as an architect for a global construction company. When she’s not designing buildings, her interests include drawing cartoon illustrations and enjoying a good exercise session to train towards becoming a fitness instructor. She is also active in campaigning for racial equality and diversity.

She lives with her fiancé Ben and his mother. She and Ben would have been on holiday in Madeira this week, but it was cancelled due to the pandemic.

I would have preferred to spend this week on holiday with Ben. Alas, Madeira was cancelled so have decided to have the week off anyway to refresh. We did luckily receive a full refund from the travel company a week before we were due to fly out, without any problems.

Instead of an all-inclusive breakfast buffet which would have been on offer, I had to settle for some toast with cherry jam, a boiled egg and a mug of tea. To wake my bank balance up, a direct debit went out for my share of our rent (£475). To wake my body up, I booked an ad hoc morning session at 11:00 with my personal trainer (£15). I have a virtual practical assessment in six weeks’ time to become a Bodycombat instructor myself, so have planned my workouts and meals for the next month. Just before lunch at 12:30, I placed some of the ingredients I need for the week in our online grocery shopping order (£15.40).

I spent the afternoon going through some theory reading for my instructor course, followed by a bout of the Animal Crossing game on Nintendo Switch. I “met up” with my brother on there and we usually explore our “islands” and buy/sell fruit, clothes and other items. Needless to say, the spending on the game will not be included in this diary! We caught up for an hour together from 17:00, then after some dinner, I watched a film with Ben and his mum.

I woke up around 8:00 again, which isn’t a surprise given that my body has hit a regular rhythm. After finishing breakfast, I was pleased to see that it was pay day! Not that I was worried as I managed to put aside a good £700 last month towards savings, thanks to less eating out and splashing on any gadgets/electronics, which is a guilty habit of mine from time to time.

I did, however, use my credit card last month to buy new clothes (mostly trousers), renew our home/contents insurance and on other supermarket shops, so I managed to pay this bill off (£299.65), and am keeping track of the remainder of my bills that will go out tomorrow.

I have no idea why I woke up at 5:00 today, but forced a couple more hours’ sleep before getting up at 8:15 and cooking scrambled eggs on toast. According to transactions that went out, my share of the gas/electricity bill (£29.93) and council tax (£74.50) were both paid today. In addition, my monthly car finance payment went out (£128.39), but I have no regrets having my first car as it’s been getting me from A to B on many occasions when I needed it. Right now, it’s not been on the road much, but saves an average of £30 or so a month on petrol!

At 10:00, I dialled into a weekly call with my Slimming World group (£2), to connect with other people who have the same goal of living healthier lifestyles. I have lost a stone so far since the start of lockdown, and have still got another six pounds before I get to my target weight. It’s great to have a group who can hold each other accountable, while motivating each other.

At 11:00, I started doing chores, such as ironing clothes. I ate lunch at 13:00, then spent the afternoon and early evening working on a new digital cartoon illustration artwork as part of a “lockdown” series. The themes have been based on common activities that people have been up to during the Covid-19 period. I will sell them as prints and use the proceeds to go to charity.

After finishing dinner at 20:00, Ben, his mother and I played a German dice game called Kniffel, which we have been playing most evenings before going to bed. It does get competitive, even though a lot of the time, it’s down to luck!

I slept in a bit until around 9:00, before opting for some cereal for breakfast and jumping straight onto my laptop to complete some architectural work for a friend. Yes, I know, I should not have been working, but this was more of a freelance job and meant some extra earnings to go towards savings. The very last bill went out for our Spotify Family account (£14.99), which has been justified for a long time, given that Ben and I listen to our respective music playlists on a daily basis. I wrapped up what I needed to finish by lunch at 13:00, and Ben, his mother and I treated ourselves to our weekly Thursday lasagne.

At 14:00, I decided to go for a walk into town and visited the one shop which sells specific South Asian ingredients. I had been craving for a very long time a dish called dosa, which is essentially a lentil and rice pancake, originating from South India, where my family are from. Making the batter for dosa is a lengthy process which involves soaking lentils, rice and fenugreek, grinding it, then leaving it to ferment before cooking. I found everything I was looking for in this shop (£12.87), including some vegetables that my Ben’s mum requested. As soon as I got home at 15:00, I began the soaking process for the dosa batter.

Today would have been when Ben and I would have returned from our now-cancelled holiday. I failed miserably in terms of not thinking about work, as I still had to wake up at 7:45, have a quick cereal breakfast, and jump on a call at 8:30 to meet my company’s events team and one of our new directors who agreed to participate in the virtual event I am helping to organise with another colleague for the following week. It was a highly positive call and I felt so much more relaxed that the event will go smoothly.

Ben’s mother invited guests round for lunch in our garden (keeping social distancing, mind!) at around 12:00, and it was a delightful occasion with lots of chatter until around 15:00 when they left. I immediately left to head into town to meet a friend, and parked my car at a place where parking was relatively decent for the amount of time I was intending to stay (£3.50). My friend and I got to sit in one of the parks by the river in Canterbury and the weather was certainly kind to us.

We later went for a walk along the main High Street. I do use Hotel Chocolat’s velvetiser machine, which is essentially a hot chocolate machine, at home during the working week as an occasional treat, and I was starting to run out of sachets. So, we popped into the Hotel Chocolat store where I bought a box of a new flavour I hadn’t tried yet: raspberry and white chocolate (£12).

More blogs from the BBC’s My Money Series:

The weather was up and down during the day, which didn’t make it an entirely exciting agenda ahead. I woke up at 8:15, had a quick breakfast, then at 9:00, Ben’s mother and I took part in a virtual pilates class. Even with some relatively sore muscles afterwards, we spent the rest of the morning clearing out the garage of any items which could be either given to charity, sold online or thrown away into a skip. We ate lunch at 13:00, and I decided to spend most of the afternoon having a nap from about 15:00 until 19:00. I recharged by getting into a quick strength-based workout in the evening and playing another dice game of Kniffel before heading to bed. A relatively lazy but spend-free day!

I can categorically say that during this week off, this was genuinely the best and most relaxing day of the entire week. A shame it is just before going back to work, but still got to at least feel like the day was well spent. I woke up at 9:30, finished breakfast at around 10:30, then spent the morning sitting outside in the garden, completing more of my digital illustration.

I had seen an email the day before about the pub down the road from us being open for the weekend only to test the waters to see how their revenue goes, before opening up more regularly as coronavirus lockdown restrictions are eased. Ben, his mother and I figured that it was worth seeing how things were going, so we headed down there at 12:30 as soon as it opened and split the cost of some drinks between us (£5.60). The pub had a one-way system, we got to order from the table itself using a phone app, and we sat outside in the garden where the sun was shining. A great way to spend Sunday, before we headed back to the house for lunch at 13:30.

From 15:00 until 17:00, I played online board games with my brother and one of our mutual friends. It is something we choose to do on a weekly basis, also given that my brother is a huge fan of board games in general. I proceeded to do a dance aerobic exercise at 19:00, before having dinner and ending the week with a final dice game of Kniffel.

How does Priya feel about her week?

It happens to be one of those weeks where it is the end of the month, so there is income but also natural outgoings. I feel generally, I am not spending on shopping or eating/drinking out as much as I used to, but the coronavirus lockdown has forced me to plan for the more important, justifiable things that I can save towards, including in the long run. The small “treats” could add up, but I will be sure to continue to be careful going forward.

It has been an interesting process to look at my week, not only in terms of spending but the simple things in daily life which make each day purposeful, especially with people I appreciate very much.

We’re looking for more people to share what they spend their money on. If you’re interested, please email [email protected] or get in touch via our My Money (World) Facebook group, or if you live in the UK, please join our My Money (UK) Facebook group and we’ll aim to contact you.

How Ocado went from understated British grocer to a $18.4 billion tech giant, as the coronavirus pandemic confirms the future of grocery shopping is online

Sun Jul 12 , 2020
“Bots” are seen on the grid (or “The Hive”) of Ocado’s “smart platform” in Andover, Britain, on May 1, 2018. REUTERS/Peter Nicholls As grocery stores worldwide experienced stockpiling, long lines, and health worries amid the coronavirus pandemic, millions of people turned to shopping online. It has been a goldrush for […] 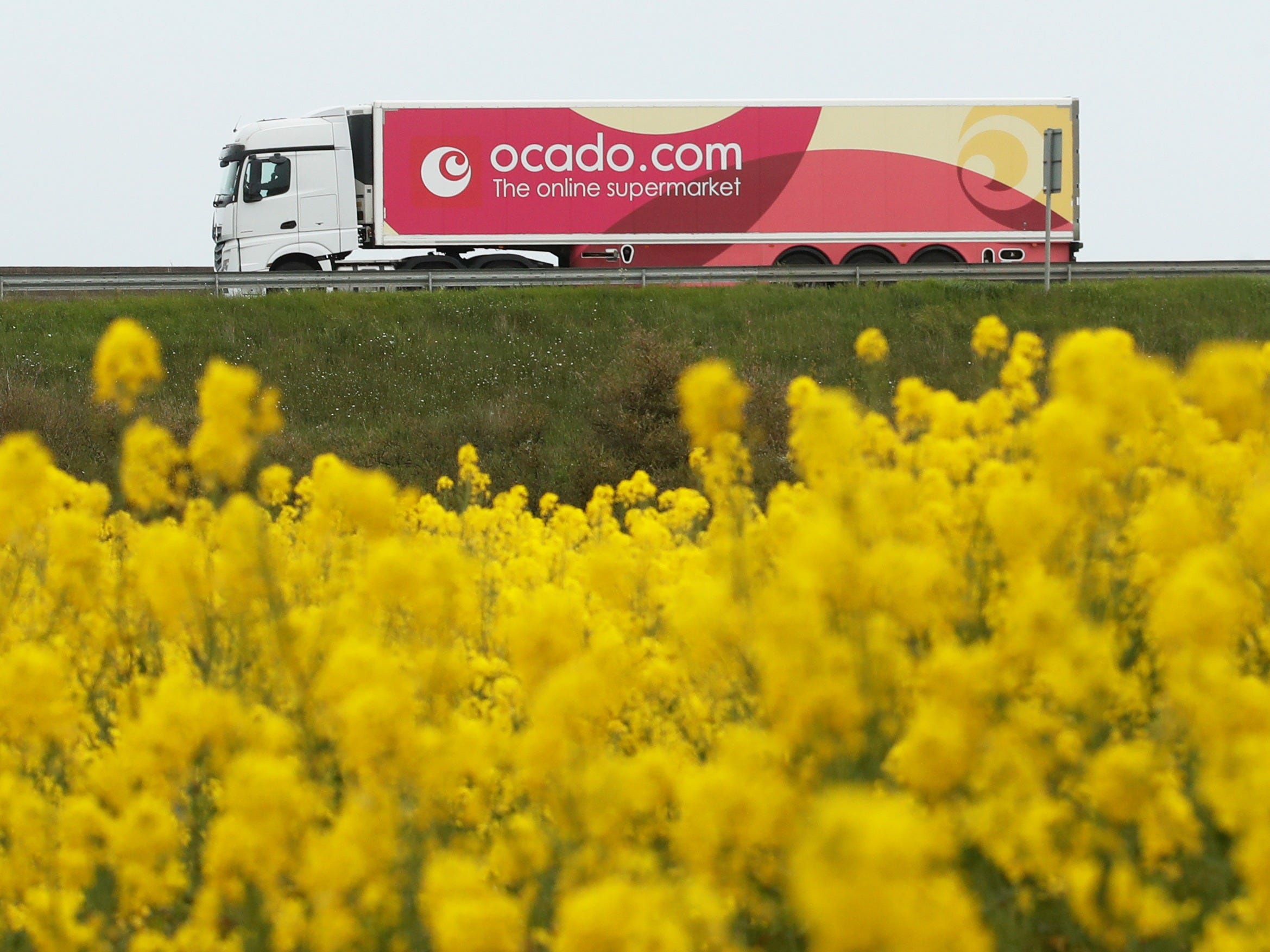