For five years, a secret supervised drug injection site has operated in the US, allowing drug users to inject more than 10,000 times in a sterile, protected environment.

The illegal operation is modeled after similar, legal sites in Canada and Europe, which seek to provide drug users with a place to get clean supplies, connect with social services and avoid overdosing in a dangerous place.

A study of the underground site published in the New England Journal of Medicine online on Wednesday revealed how lives could be saved if the US were to sanction such facilities.

Related: Secret supervised drug injection facility has been operating at US site for years

At the clandestine site, there were 33 opioid-involved overdoses, which were reversed with the medication naloxone, according to researchers at the not-for-profit RTI International and the University of California, San Diego.

“Not only were the 33 overdoses all saved, none of them required anyone calling 911 or being sent to a hospital,” said Alex Kral, an RTI International epidemiologist. “This is a big piece of this – we don’t need to overburden the emergency system with all these overdoses if people are inside, if they have trained people monitoring them.”

An unnamed organization created the site in September 2014 in response to the opioid overdose crisis. Though overdose death rates have dropped slightly in the past couple of years, they are still significantly higher than in previous decades and nearly 70,000 people died from overdoses in 2018.

The underground facility has six stations for injections using sterile equipment, according to the study. There is a second room for people to spend time post-injection and both rooms have staff trained in peer counseling and how to intervene during an overdose.

To be allowed in the site, people must be invited, bring their own drugs, have injected drugs before and be at least 18 years old. The number of individuals eligible is capped at 60.

The study of 10,514 injections at the site found a significant change in the type of drugs people used there over the five-year period. In 2014, 5% of injections involved a combination of opioids and stimulants, while 60% injections did in 2019.

The study only monitored broad categories of drug use – opioids, stimulants and a combination of both – because more specific information could reveal the location of the site.

If that more specific information could be made public, it would be useful for researchers such as Kral to better understand patterns of drug use in a community. “I’ll get information all the time from the site, where someone will say: ‘The fentanyl is weird, I got this the other day, it smells different than it used to smell,’” Kral said.

There’s a lot that could be done if we wanted to, if there was the political will

If the sites were legal, public health bodies would also have better access to current trends in drug use, instead of the usual method of waiting months for overdose reports to come out.

At several legal sites in Canada, drugs can be tested in machines that alert users and public health experts to bad batches, which can lead to dangerous mass overdose events.

“There’s a lot that could be done if we wanted to, if there was the political will, that would make a big difference,” Kral said.

Some government officials in cities including San Francisco and Philadelphia support opening these sites in light of research showing how they can help public health.

Supervised injection sites were found to reduce overdoses and improve access to health services in a 2014 review of 75 studies of facilities across the world. They were also associated with less outdoor drug use and were not found to increase crime or drug use.

Philadelphia nearly opened a site in February but delayed it because of concerns from the community. On 24 June, the federal judge who allowed the site, which is to be operated by the not-for-profit Safehouse, put the case on hold because of unrest from Covid-19 and the uprisings against systemic racism. The US district judge Gerald McHugh wrote that it was “the wrong moment for another change to the status quo”.

Related: Canada offers places for addicts to shoot up safely. Can the US copy the model?

The California attorney general, Xavier Becerra, filed a brief in support of the Safehouse site this week. Becerra said: “California has always been a trailblazer, and we’re committed to doing what it takes to keep our communities healthy and safe.”

This year, California’s legislature will take up a bill that would offer legal protections to people who open these sites. And in Massachusetts, members of the state’s committee on mental health, substance abuse and recovery in May approved legislation that would legalize the sites – though it must be approved by the state’s senate and house of representatives to become law.

Kral said while five or six years ago he would never have expected the conversation about supervised injection sites to have advanced as much as it has in the US, there are still significant hurdles ahead.

“With 70,000 people dying a year of something, it’s still kind of crazy we’re not doing more about it and this is the obvious solution, and at least in some places a proven one,” Kral said. “But I think the fact that it has not happened still shows public perception out there is a tough one.”

Thu Jul 9 , 2020
A member of the armed forces directs people to deposit their self-tests into a container in Spinney Hill Park in Leicester – AFP Coronavirus Article Bar with counter .. Taxi drivers, people arriving at airports and NHS staff could be subject to mass coronavirus testing in efforts to identify asymptomatic […] 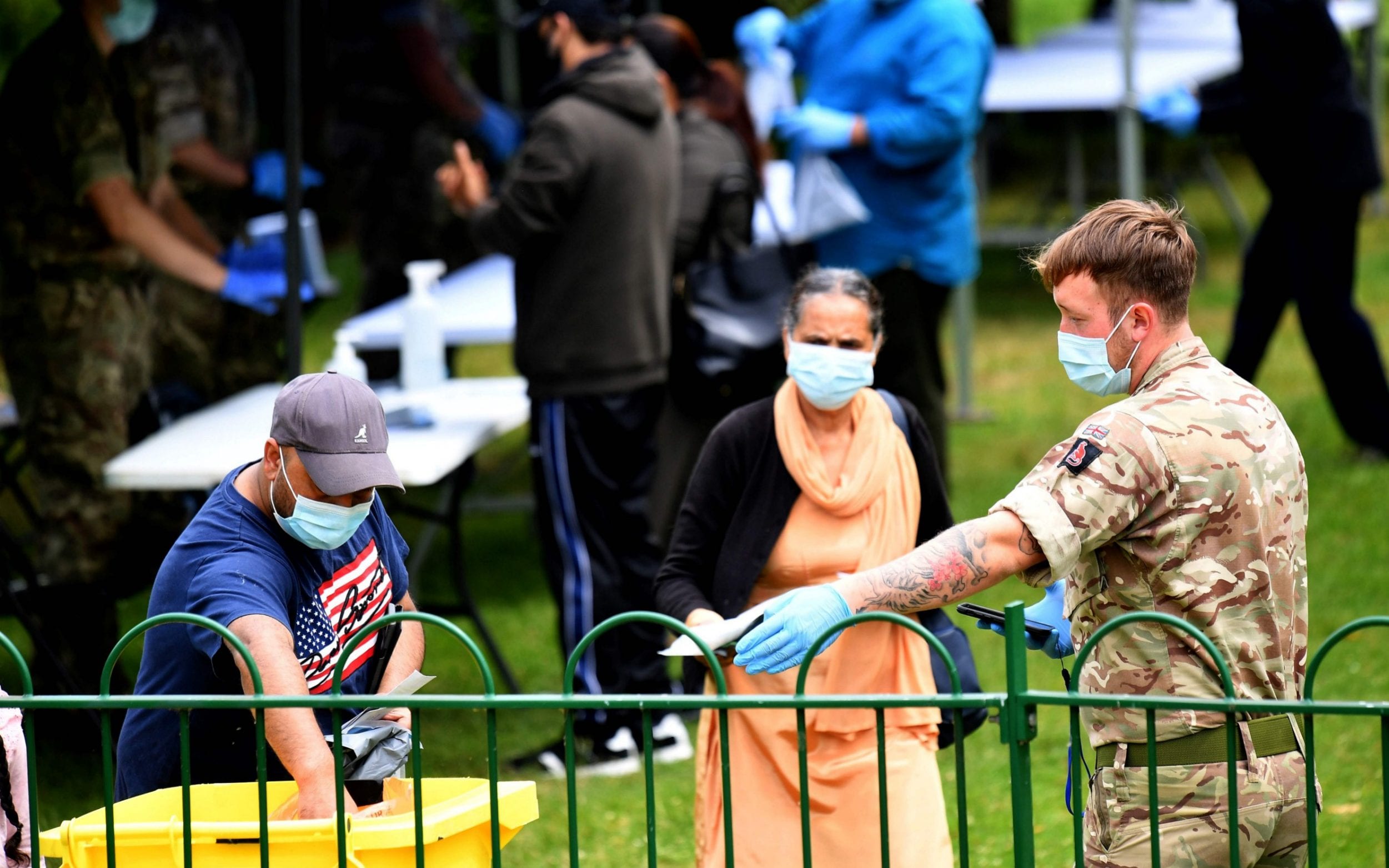