The global expert who helped draft China’s first animal welfare law has a succinct message for protecting wildlife: “If we don’t buy, they don’t die.”

Grace Ge Gabriel, Regional Director for Asia at the International Fund for Animal Welfare, told The Independent that understanding the driving forces behind the demand for wildlife and their parts was integral to tackling the illegal wildlife trade (IWT).

The Independent’s Stop The Wildlife Trade campaign was launched by its proprietor Evgeny Lebedev to call for an end to high-risk wildlife markets and for an international effort to regulate the illegal trade in wild animals to reduce our risk of future pandemics.

On Wednesday, Ms Gabriel joins the first webinar of The Independent’s campaign to raise awareness around the issue, hosted by non-profit partner Space For Giants’ CEO Max Graham. The panel will explore solutions for preventing the supply of wildlife and their parts from natural habitats to consumer markets.

Illegal wildlife trafficking, worth an estimated $23bn annually, threatens nearly 9,000 species with extinction and for decades has served as a low-risk source of income for criminal organisations and terrorist groups.

Like all trade, it is driven by existing demand and therefore raising awareness among buyers is key.

Ms Gabriel has led global efforts to protect the Tibetan antelope, Asian tigers and Asiatic black bears, along with a campaign to raise awareness among Chinese consumers of the relationship between elephant killing and the ivory trade. In four years, her campaign more than halved the propensity to buy ivory. In 2017, China took the monumental step of banning the elephant ivory trade.

She has been a guest speaker for Interpol on the crisis of global wildlife crime and testified before the EU Commission on protecting wild tigers and the UK parliamentary environmental audit committee.

Ms Gabriel said that illegal trade runs rampant where legal loopholes create the opportunity for it to exist, both in physical markets and online.

“This understanding was the reason China banned ivory trade. Banning ivory trade shifts the burden of proof from law enforcers to the criminals, helps stigmatise ivory consumption and creates an enabling social environment for changing consumer behaviour to not buy ivory.”

Demand exists for a number of endangered species, some as delicacies while others are coveted for their medicinal properties or decorative value.

The plight of the pangolin has been well documented. They remain the world’s most heavily-trafficked mammals, driven by demand for their meat and keratin scales, an ingredient in traditional Chinese medicine.

The status of all eight species of pangolins was upgraded in the UN Convention on International Trade in Endangered Species of Wild Fauna and Flora (Cites), barring international trade in 2017.

And yet in 2019, more than 80 tonnes of pangolin scales were seized around the world.

As pangolins are prohibited under CITES, the seizure data (10% of the overall smuggling rate) gives an indication of the high demand for the “scaly ant-eaters”.

However this is not always the case. “If some of the local species, such as bats, are not protected we have no data on their trade or demand,” Ms Gabriel says.

Driving the demand for endangered wildlife is the perception of species and their parts as status symbols.

“Among the middle and upper classes of China’s growing urban population, consumption of endangered wildlife has less to do with survival and health than with status and wealth,” she said.

“Having pangolin meat on a banquet table; buying tiger bone wine, or giving a carving made from ivory/rhino horn as a gift is mainly to demonstrate wealth and define status.”

Along with the devastating toll on species’ survival, the wildlife trade has been linked to zoonotic disease – which can jump between animals and humans – the catastrophic consequences of which are being felt with the coronavirus pandemic.

“Viruses don’t make distinctions between legal and illegal trade,” Ms Gabriel says. “Nor do the viruses distinguish whether the wildlife traded is for food, medicine or exotic pets.

“The wildlife trade brings a variety of wild animal species into close and unnatural proximity with each other and with people. In the natural world, many wildlife species from different regions, countries or sometimes different continents never meet.

“But in the process of commercial trade they are cramped in cages close to each other. Sickness, injury and stress of captivity weakens the animals’ immune systems, and creates an environment where mutating viruses can jump from one species to another.

Key to stopping the trade is stamping out demand and raising public awareness, Ms Gabriel says. “If we don’t buy. They don’t die. A person can decline a gift of an ivory trinket or a pangolin meal or get on social media to spread the word. Warn family, friends and peers that consumption of wildlife is a risk for our own health.”

What does the future hold for the reclusive pangolin?

Can social media be weaponised against the illegal wildlife trade?

We need your help to tackle the illegal wildlife trade

Nick Cordero's Wife Amanda Kloots Says She 'Cried All Day' as He Remains in ICU: 'I Broke Big Time'

Tue Jun 30 , 2020
Amanda Kloots is feeling very emotional amid her husband Nick Cordero’s recovery from coronavirus (COVID-19) complications. On Monday night, Kloots shared that she had an “outburst” as the 41-year-old Broadway star spent his 89th day in the intensive care unit, writing in a lengthy note on her Instagram Stories: “I […] 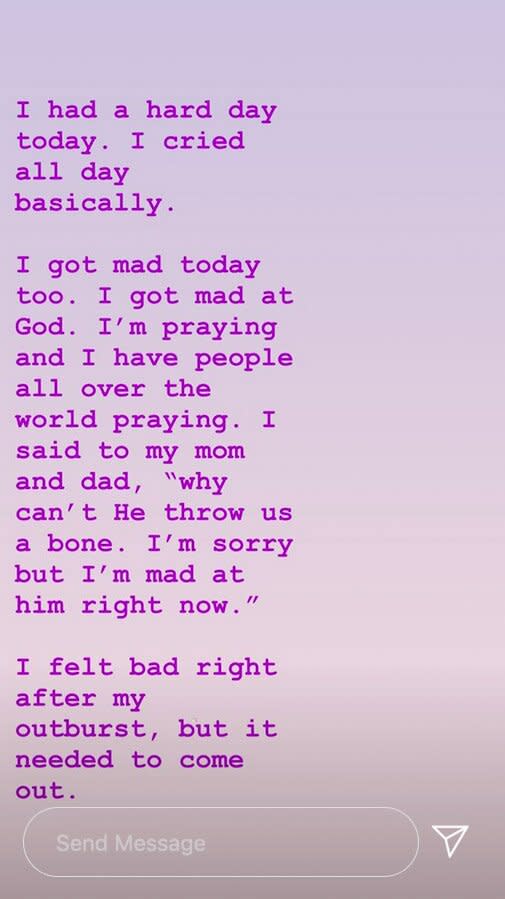