One of the many challenges of reopening classrooms in the United States is that there isn’t much good data, if any, about what could happen. Will in-person learning lead to a jump in the transmission of COVID-19? Will students and teachers get sick? How many? How sick?

“There are so many different ways in which schools have reopened around the world, and it’s hard to put in a capsule to say ‘This is the best way’ or ‘This is potentially something we can replicate,’” said Dr. Ibukun Akinboyo, an assistant professor in the pediatrics department at Duke University School of Medicine.

Yet there is something to be gained by looking at other countries that have reopened before the United States. Schools and administrations can at least consider adopting some of their current best practices and can learn from their missteps before they become our own. Here’s what experts have to say about it.

Lesson 1: Take it slow and be deliberate.

Israel’s effort to reopen schools has made headlines, and not because it has gone well. Students and staff have experienced a surge in COVID-19 cases since schools started to reopen in May, prompting many to call the decision to bring students back into the classroom a “disaster.”

But experts warn that Israel reopened too much, too soon. And having students return to the classroom at the same time that other parts of the economy were reopened has made it impossible to get a handle on where the new cases are coming from. As Hagai Levine, an epidemiologist at the Braun School of Public Health and Community Medicine at the Hebrew University of Jerusalem, cautioned in an article in The Daily Beast: “The government decided to open the entire system all at once on May 17. What happened next was entirely predictable.”

The lesson, then, for American school districts may be that instead of reopening schools while simultaneously lifting other restrictions (on bars, restaurants, larger gatherings, etc.), it is better to focus on small, incremental steps.

“The key is stepwise implementation — it’s not a red light, then suddenly a green light thing,” said Dr. Sandra Kesh, an infectious disease specialist with Westmed Medical Group in New York. Schools and districts need to have the ability to track what is happening as they reopen so they can course-correct as soon as possible. Of course, widespread access to testing, which continues to be a problem in the U.S., is a big part of that process.

Lesson 2: Be creative about eking out social distance.

In its recommendations for safely reopening American schools, the American Academy of Pediatrics said schools should aim for at least 6 feet between students’ desks or seats when possible, although it added that 3 feet might be enough.

Finding that kind of room in classrooms is difficult, but reopened schools around the world have taken distance very seriously. In Denmark, for example, students must sit at least 6.5 feet apart. Classes have been held outside, often in parks, when possible. (There has been some talk of that happening in the U.S. but little in the way of action on behalf of districts looking to pursue the outdoor option.)

Schools around the world have also been quite creative in their approach to reminding students to maintain social distance. At one preschool in France, staff painted smiley faces on the courtyard blacktop to make it clear where kids should stand. In Taiyuan, China, some children have begun wearing wings to help them stay far enough apart.

Of course, props — however cute or original — are not enough. One reason why many schools abroad, as well as many districts here, are sticking to a hybrid model (keeping kids home on certain days of the week) is to cut down on the number of students in the classroom at any given time to help maintain social distance.

When Denmark and Finland reopened schools last spring, they started with elementary school children, then gradually welcomed older students. That’s because there is some evidence — by no means conclusive — that younger children don’t spread COVID-19 as readily as teenagers and adults do.

That’s not to say that U.S. schools should open for younger kids first, but districts should certainly be considering the many ways in which age influences risk.

Young kids might be less likely to transmit the virus, but they are also less likely to follow social distancing rules. Older kids might be able to wear masks all day long, but this could be a struggle for younger kids, which is why in places like Israel, they’ve been required for children 7 and older but not younger students. As Dr. Nathaniel Beers, a pediatrician at Children’s National Hospital in Washington, D.C., previously told HuffPost, some districts in the U.S. appear to be taking this into account, requiring masks for children in second grade and above but only encouraging them for first graders and kindergartners or even younger children.

Lesson 4: Open only if community spread is low.

Here in the U.S., President Donald Trump is calling for schools to reopen at the same time that COVID-19 is surging across much of the country. But elsewhere in the world, successful school reopenings have happened only when the spread of the coronavirus was relatively under control.

That is not to say, however, that in areas where there is not significant community spread of COVID-19 that schools could not reopen safely, she added. But those are decisions that should be made locally and with an understanding that what is happening in any given city, county or state will likely be reflected in its schools.

“The community predicts the school prevalence of COVID-19 and not necessarily vice versa,” said Akinboyo. “We’re not necessarily seeing that school reopenings by themselves have led to a sudden spike among communities that have low prevalence.”

Below, photos of what schools and classrooms look like around the world lately.

Parenting During The Coronavirus Pandemic: What You Need To Know

For Teachers Who Are Parents, Schools Reopening In The Fall Is Bad News

We Know Masks Work. So What Are Schools Planning? 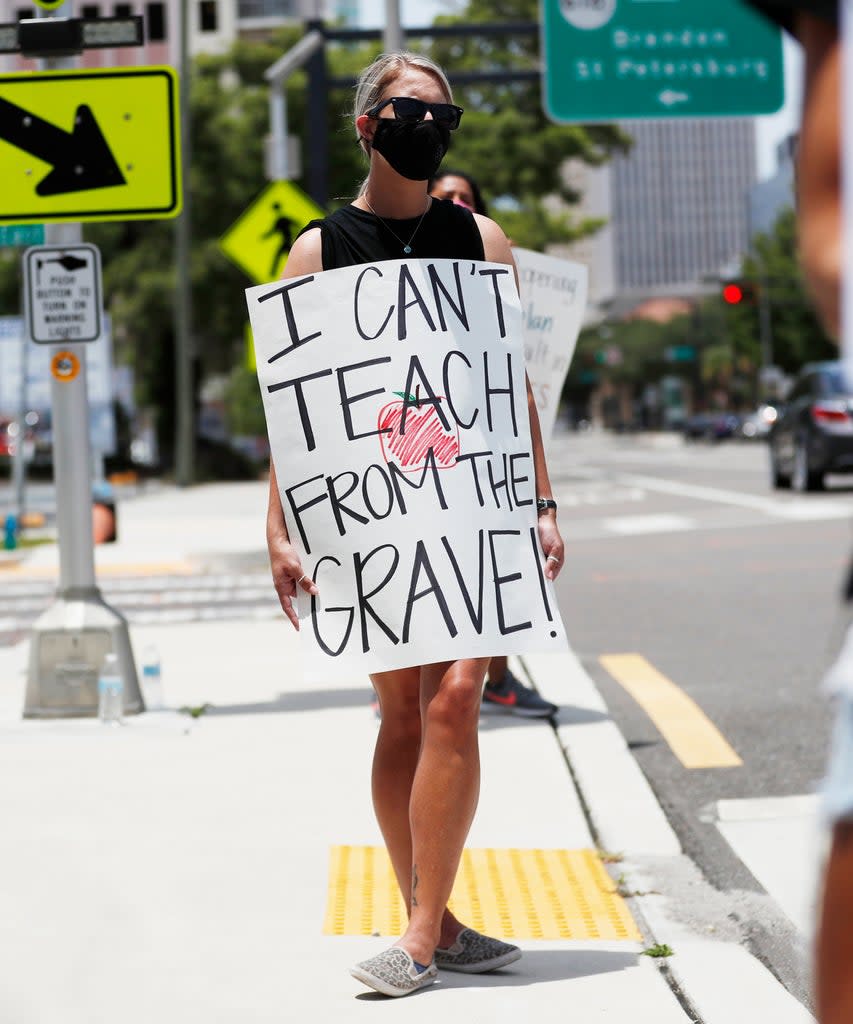