When Christina Curfman thought about whether she could return to her second-grade classroom in the fall, she struggled to imagine the logistics. How would she make sure her 8-year-old students kept their face masks on all day? How would they do hands-on science experiments that required working in pairs? How would she keep six feet of distance between children accustomed to sharing desks and huddling together on one rug to read books?

“The only way to keep kids six feet apart is to have four or five kids,” says Curfman, a teacher at Catoctin Elementary School in Leesburg, Virginia, who typically has 22 students in a class. Her district shut schools on March 12, and at least 55 staff members have since tested positive for the coronavirus. “Classrooms in general are pretty tight,” she says. “And then how do you teach a reading group, how do you teach someone one-on-one from six feet apart? You can’t.”

So Curfman—who has an autoimmune disease that makes her more vulnerable to COVID-19—consulted her doctor, weighed the risks of returning to school and decided to retire early after 28 years of teaching. At 55, she’s eligible for partial retirement benefits and will take home less pay than if she had worked for a few more years, but the decision gave her peace of mind.

“It’s either that or risk your health,” she says. “It’s kind of a no-brainer.”

Recent surveys suggest she’s not alone. Faced with the risks of an uncertain back-to-school plan, some teachers, who spent the last few months teaching over computers and struggling to reach students who couldn’t access online lessons, are choosing not to return in the fall. The rising number of coronavirus cases in many parts of the country, and recent evidence that suggests the virus can spread indoors via tiny respiratory droplets lingering in the air, have fueled teachers’ safety concerns, even as President Trump demands that schools fully reopen and threatens to cut federal funding from those that don’t. (Trump has said that older teachers, who are more vulnerable to the virus, could “sit it out for a little while, unless we come up with the vaccine sooner.”)

About 20% of teachers said they aren’t likely to return to teaching if schools reopen in the fall, according to a USA Today/Ipsos poll conducted in late May. EdWeek Research Center surveys conducted around the same time found that more than 10% of teachers are more likely to leave the profession now than they were before the pandemic, and 65% of educators said they want school buildings to remain closed to slow the spread of the virus.

But the pressure to reopen schools is strong. Recent studies show that students have likely suffered significant learning loss during this period of remote schooling, worsening the achievement gap between affluent and low-income students. Meanwhile, research shows that children are much less likely to suffer the most severe health effects of the virus. The American Academy of Pediatrics released guidance on June 25, recommending that all back-to-school policies aim to have “students physically present in school,” citing the importance of in-person learning and raising concerns about social isolation, abuse and food insecurity for children forced to remain at home. Dr. Anthony Fauci, the country’s top infectious disease expert, agrees. “I feel very strongly we need to do whatever we can to get the children back to school,” he said during testimony before the Senate on June 30.

But the health risks are greater for some educators and other school employees, including bus drivers and custodians, than they are for children. Adults over age 65 account for the vast majority of COVID-19 deaths in the U.S. And 18% of public and private school teachers and 27% of principals are 55 or older, according to federal data. That’s why researchers at the American Enterprise Institute warned of a “school personnel crisis,” recommending in May that school districts provide early retirement incentives or create a “virtual teaching corps” for those who feel safer working remotely.

“I still have not seen any state really address this in their reopening plans. There’s passing references to schools needing to do something for their vulnerable population, but you just don’t see the activity that would match the personnel challenge that schools are going to face,” says John Bailey, an American Enterprise Institute visiting fellow, who wrote the May report. “We shouldn’t be putting teachers in a situation where they have to decide between their financial security and their health security.”

In Connecticut—where a union survey found that 43% of teachers think they’re at higher risk for severe illness if they contract COVID-19 because of their age or an underlying medical condition—Andrea Cohen, who is over 65, decided to retire as an elementary school social worker. The decision was driven by concerns she could bring the virus home to her 95-year-old mother and to her grandchild, who is due to be born in September. “I felt like this was the safest thing to do,” she says.

“I trust that they’re going to try to come up with some good system, but I just didn’t know what the system was going to be, and I couldn’t visualize how it was going to work for me in my school office,” Cohen says. “All I could see was me in my tiny little office, with six kids, and how it wouldn’t be safe for anybody.”

In Michigan—where 30% of teachers told the Michigan Education Association they were considering leaving teaching or retiring earlier than planned because of the pandemic—Theresa Mills, 58, decided to retire after “an anxiety-ridden spring” of teaching literature remotely and trying to build relationships with students online. “The whole idea of being remote and disconnected was equally daunting as the fear of not being safe,” she says about the upcoming school year.

Many school districts are considering hybrid plans that involve students rotating between in-person classes and remote learning on different days of the week. But Education Secretary Betsy DeVos criticized those plans during a call with governors on Tuesday, urging schools to be “fully operational” with in-person instruction five days a week, the Associated Press reported.

Loudoun County Public Schools in Virginia, the district where Curfman taught, is planning for students to attend in-person classes two days a week and learn at home the rest of the time, but it is also allowing parents to opt for full-time remote learning.

Curfman says about five families have already asked her to privately tutor her former students and their siblings at home on distance-learning days. It’s one example of the nontraditional approaches to schooling caused by the pandemic. As long as she can do so safely, Curfman is considering it.

There’s no evidence that teachers are retiring en masse. In the middle of an economic crisis that has left millions unemployed, including public school employees, many teachers aren’t looking to flee the profession, despite their concerns about this fall.

“I kind of don’t come from a family that retires,” says Vicki Baker, a 64-year-old math teacher at the Philadelphia High School for Girls, but she wants to feel safe when she returns to her classroom. “I feel like we have one time to get this right because there’s so many things at risk,” she says. “If somebody gets sick because they’re at school, the students bring it home to their families. I bring it home to mine.”

College professors have raised similar concerns. Hundreds of Georgia Tech faculty members called for the continuation of remote learning this fall, arguing in an open letter that “no faculty, staff, or student should be coerced into risking their health and the health of their families by working and/or learning on campus when there is a remote/online equivalent.” Professors at the University of Notre Dame asked that they be allowed to decide individually whether to teach in-person or online.

Meanwhile, the surge in coronavirus cases from Florida to Texas to Arizona has added urgency to the need for safe back-to-school plans.

Before the pandemic, Caren Gonzalez, a chemistry teacher at Tuloso-Midway High School in Corpus Christi, Texas, was planning to retire next year, having promised the Class of 2021 that she would be there to teach them AP Chemistry. During the last few months, she shifted her lesson plans online, uploading videos of herself writing out chemical equations and offering students one-on-one help over Zoom, sometimes meeting as late as 10:30 p.m. to accommodate their schedules. “These are not normal times,” she told them. “You don’t need to apologize.”

But Gonzalez, who will turn 60 in July, questioned whether it would be safe to return to school before there’s a coronavirus vaccine, and she decided to retire now. “It’s just the uncertainty,” she says. “Nobody knows quite what’s going to happen.”

The Centers for Disease Control and Prevention (CDC) recommends that schools space desks six feet apart; seat only one child per row on school buses; discourage students from sharing toys, books or sports equipment; close communal spaces, such as cafeterias and playgrounds; and create staggered drop-off and pick-up schedules to limit contact between large groups of students and parents. On Wednesday, Trump said he disagreed with the CDC’s “very tough & expensive guidelines for opening schools. While they want them open, they are asking schools to do very impractical things.”

Guidance released Tuesday by the Texas Education Agency requires schools to hold daily in-person instruction, but allows parents to opt for remote learning instead. The guidelines say schools should “attempt” to have hand sanitizer or hand washing stations at every entrance and in every classroom, should keep windows open to increase airflow when possible and should “consider” spacing desks six feet apart.

Gonzalez worries that such guidance will be difficult to implement on the ground and that students or teachers will suffer the consequences.

“Six feet apart becomes three feet apart, becomes ‘Don’t worry about it at lunchtime in the lunch room,’ so it just kind of degrades,” Gonzalez says. “And it’s not because the districts are trying to cheat teachers or their students or anything. They’re just trying to do what they’re told with the resources that they have.”

Without a boost in state or federal funding, many school districts might not have the resources they need. An analysis by the American Federation of Teachers estimated that the average school will need an extra $1.2 million, or $2,300 per student, to reopen safely. An analysis by the School Superintendents Association estimated it would cost less, but still nearly $2 million for the average school district to buy enough hand sanitizer, disinfectant wipes and masks and to hire more custodial staff and nurses or aides to check temperatures regularly.

“I don’t think anybody is going back, thinking, ‘This is fine, everything’s normal,’” Gonzalez says. “I think everybody’s got a little bit of apprehension if they’ve been paying attention.”

Wed Jul 8 , 2020
Photo credit: TikTok From Prevention Dentist Olivia Cuid, M.D., shared a new hack for making your surgical mask fit better. She demonstrated the trick in a TikTok video that quickly went viral. The video was shared and reposted by both Katie Couric and Kristen Bell. Wearing a mask in public […] 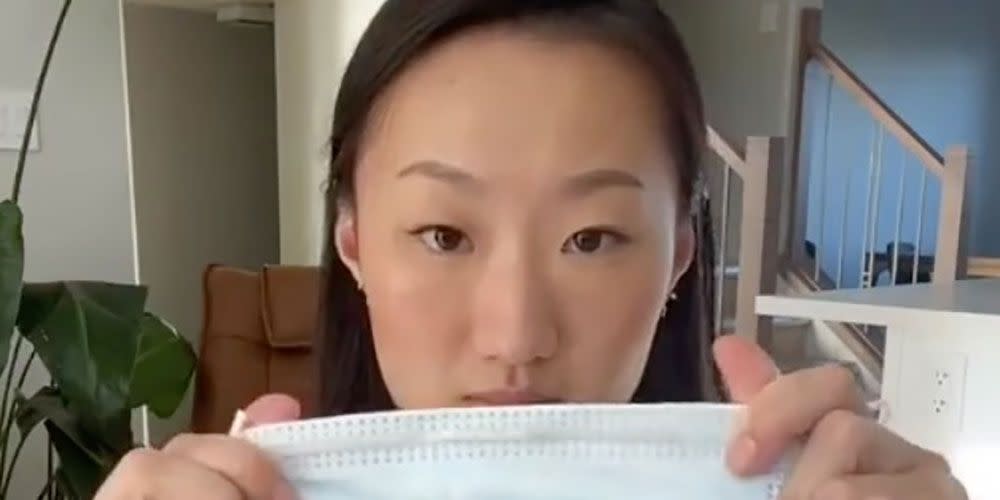