LONDON — After a rough few weeks, Boohoo’s share price is bouncing back, but the question remains whether its young consumer base will keep buying from the brand, which has been dogged by allegations of poor labor practices and unfair pay at one of its supplier’s factories in Leicester, England.

It remains to be seen whether the scandal will bring forth any meaningful change, or encourage consumers to stop before they shop, and think about the clothing brand, or retailer’s, ethics. Or will the controversy just be forgotten in a few months’ time, with boohoo.com’s young clientele once again turning to the retailer for cheap alternatives to the trends they spot on social media?

Recent history has shown that shoppers have short memories, and often return to fast-fashion sites because they can’t resist the social media buzz — and a good bargain. In 2018, a separate investigation revealed poor working conditions at the Leicester factories that supply Boohoo, but the company went on to report strong sales.

Before the most recent Leicester news broke, it was thriving throughout lockdown, and leveraged its robust balance sheet to acquire other struggling high-street brands, such as Oasis and Warehouse. It also purchased the shares it didn’t already own in fellow fast-fashion site PrettyLittleThing.

Given the impact of COVID-19 on retail, jobs and public health, and a surge in activism around diversity and anti-racism issues, the climate today is worlds away from that of 2018. There is no doubt the Boohoo news has created a different kind of momentum, with change now seeming more possible and shoppers more aware — and less tolerant — of supply-chain and worker-abuse issues.

In response to the Leicester factory scandal, which was first reported by the activist charity Labour Behind the Label and The Sunday Times of London, Boohoo said it was launching an immediate, independent review of its supply chain, and pledged 10 million pounds to eradicate “workplace malpractice.” It also cut ties with two of its suppliers.

Shortly after the Boohoo scandal broke, yet another publicly quoted British fast-fashion retailer, Quiz, launched a probe into a factory that makes its clothing in Leicester. Earlier this month, Quiz said it was investigating “an alleged instance of non-compliance with National Living Wage requirements” in a factory making its products, and cut ties with the supplier working with the factory.

A #boycottboohoo social media campaign has also erupted with more than 400 posts detailing the conditions and illegal wages garment workers face in Leicester’s factories — they are said to be paid as little as 3.50 pounds per hour, well under living wage in the U.K. — and pointing to more sustainable alternatives.

“I think Black Lives Matter has provoked necessary outrage and action. And it’s helped people realize that fashion is built on oppression and racism — 80 percent of garment workers are women of color who make less than a fair living wage,” said the activist Venetia La Manna, who has been fighting the case against fast fashion and educating her audience, which includes more than 100,000 followers on Instagram.

She feels the message is now starting to be heard in wider circles, with increasing numbers of shoppers ready to make more considered purchases: “Thankfully, my message seems to be traveling further than my echo chamber, which is really encouraging. I think some people are prepared to boycott Boohoo, if even for a short while. There is, however, less awareness around these issues being systemic.”

And what happens after the media buzz dies down? Will Gen Z shoppers return to their old shopping habits?

Those shoppers, and their appetite for fleeting social-media trends, are indeed the generation helping fast-fashion businesses like Boohoo thrive. But they are also campaigning for climate change, selling their secondhand clothes on Depop or repurposing their wardrobe items.

“On the one hand, this generation has been brought up with cheap fashion on tap, while on the other hand, they are the most engaged with climate and labor issues,” said Flora Davidson, cofounder of SupplyCompass, a software platform that enables fashion brands to source, develop and produce sustainably.

Many would argue that instead of pointing fingers at Gen Z for some of their consumption habits, press, influencers, governments and retailers themselves need to educate young shoppers.

“It’s unfair to blame a generation. In fact, I think a lot of Gen Zers are extremely environmentally conscious and huge supporters of the secondhand industry — especially Depop. I think the blame should be on capitalism and the greedy fast-fashion brands that are run by billionaires,” La Manna said.

Emily Salter, retail analyst at Global Data, said Gen Z isn’t the only demographic seeking a quick fashion hit online. She pointed to a broader, cross-generational interest in cheap fashion that has existed for years: “The appetite for fast fashion is wider than a single generation due to its low prices and accessibility to the majority of consumers, with Primark being a prime example of a fast-fashion retailer with a wide customer base due to its affordable prices,” Salter said.

What might be different now is the advent of social media and fashion influencers, where Gen Z shoppers are flooded daily with images of fast fashion and new trends on social media.

“Influencers play a huge role in keeping the demand for fast fashion high as they are constantly promoting new products, posting haul videos, providing discounts, and often creating their own product lines with retailers,” Salter said.

With regard to Boohoo, myriad famous faces have aligned themselves with the fast-fashion retailer over the years, from Britain’s biggest reality TV stars to members of the Kardashian family.

Some of these influencers are now doing an about-face and speaking against their former sponsor, including Vas Morgan, a reality star from the popular British TV series “The Only Way Is Essex” and influencer Jayde Pierce, who counts 1 million followers on Instagram.

“What are you doing about this Boohoo? You have influencers promoting your s–t constantly and making you millions and this is what you’re paying people behind the scenes? I’m truly disgusted…and wouldn’t feel comfortable working with them again,” Pierce tweeted.

Salter also pointed to the need for more robust press coverage of the issue. She believes increased media pressure could potentially have “long-lasting impact” on how consumers shop.

Davidson of SupplyCompass would argue the same: “The more space the press dedicates to educating readers on supply-chain issues, on sustainability, and also featuring inspiring businesses that are leading the way, the more consumers will become informed and realize how important this is.”

Some would also argue that most ethical and green labels should ensure that they are catering to as broad an audience as possible, and that sustainable fashion should not just be for the rich, slim and privileged. The same argument applies to organic, locally sourced produce: In the U.K., a bag of organic carrots sometimes costs five times the price of an identical, but nonorganic, bag of the vegetable.

Salter summed it up this way: “Change on a large scale is unlikely until fast fashion is not the most convenient and cheapest model of buying clothes.”

La Manna would agree. “Ultimately, Boohoo makes size-inclusive clothing that follows the trends of the world’s top influencers at an affordable price, so it’s going to take a long time and a lot of education for people to alter the shopping habits they’ve been used to for a lifetime. We can’t have a sustainable fashion revolution until it’s accessible for everyone.”

I-League or no I-League, Sreenidhi have long-term plans

Wed Jul 22 , 2020
Sreenidhi FC, the Telangana-based group, has drawn out a long-term plan to build a sustainable football club and target a place in the I-League in the near future. The club & academy, owned by the region’s well known Sreenidhi Educational Group, has taken an interest in Indian football since 2016. […] 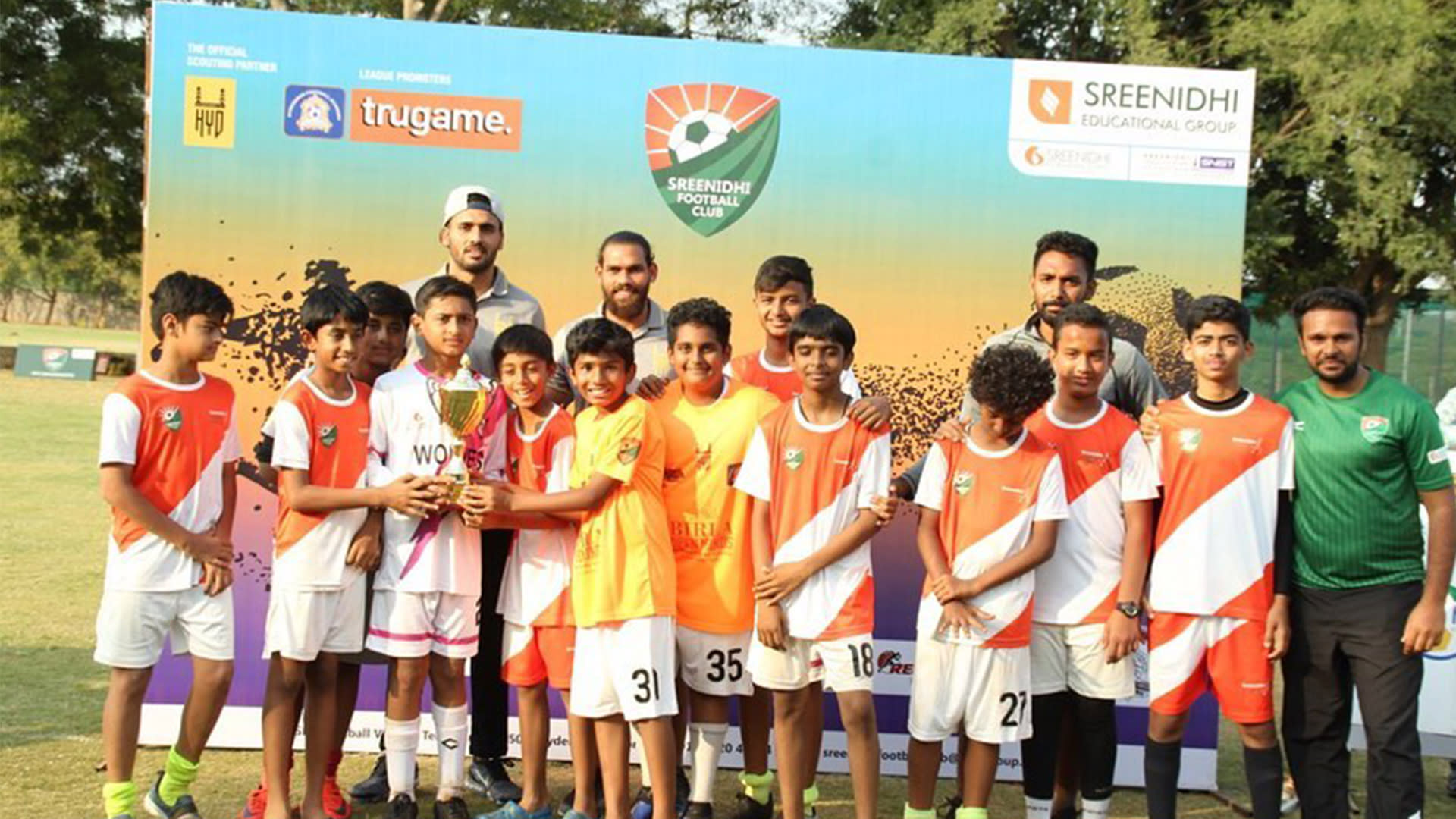