The COVID-19 pandemic is a crisis of the unknown. Our understanding of the disease and the best ways to fight it seem to change from week to week. This murky information environment creates opportunities for entrepreneurs offering the promise, if not always the reality, of safety.

You can find many of those entrepreneurs on crowdfunding sitessuch as Kickstarter and Indiegogo, where catchy-sounding ideas can go viral on the basis of nothing more than a demo video, raising millions of dollars from would-be customers eager to be first in line.

Right now, if you’re so inclined,, you can throw your cash at a mask that only covers your nose, or a wearable plastic bubble, or a keychain to touch elevator buttons for you.

But would you actually be backing something made of science, or just something science-flavored?

We rounded up some of the most questionable innovations and presented them to Paula Cannon, a virologist and professor at USC’s Keck School of Medicine, who previously answered our readers’ embarrassing questions about life in a pandemic. We asked her to rate these innovations on a scale from one to five surgical-masked emoji; one being “a bad idea that will not do what it says it does” and five being “Hey, it’s your money.”

Nosy, a mask that only covers your nose, took social media by storm when it first launched.

“The majority of people take for granted how infrequently they breathe through their mouths,” the Kickstarter pitch reads. That may be true, but if you were wearing it to prevent spreading droplets from your breath, you’d have to commit to never sneezing, yawning, coughing, or walking a bit too quickly up a flight of stairs and needing to pant a little.

Nosy does specify in the FAQs that it’s not intended as a coronavirus solution, and that it has been in development for over 12 months — i.e. prior to the whole global pandemic thing. The same FAQ says unidentified “Harvard researchers” have linked air pollution to a higher mortality rate from COVID-19, so “although wearing a Nosy will not prevent you from spreading the coronavirus, it will ultimately improve your lung or breathing health, which will give you the best fighting chance should you catch the virus.”

Rating:😷😷 “If you have people who have their lips stitched together and never breathe through their mouth it could work,” Cannon said.

Billing itself as “a possible solution to COVID-19,” the Biotrimmer is a “quantum energy generator” that treats every cell in the human body simultaneously with electromagnetic waves in an “energy lock.” Basically, it’s the futuristic all-in-one diagnosing and healing tube from the 2013 movie “Elysium.” The slickly produced video even intersperses footage from the film.

One thing: This technology does not exist. It might exist in the future. If that day comes, it probably will involve medical technology companies and not strangers on the internet.

Another issue: “They need to work on the name,” Cannon said. “I kept thinking of something that was going to get rid of facial hair.”

We reached out to the team behind Biotrimmer to respond to this assessment. In a very long email, a statement from Gianfranco Passoni of the Robotic Consulting team in Switzerland stated that development of the Biotrimmer predated the movie “Elysium,” and that “inside the Biotrimmer tunnel, particular electromagnetic phenomena will occur, in a clear relationship with the Cosmos that universally hosts us.” Passoni’s email also provided the following evidence that the technology was sound: “The proof is documented in the plague paintings of 1630, see the painting in which it is noted that the eliminators who recover highly contaminating bodies do not contaminate them, without masks and gloves and without disinfectants.” An image was attached to the email that appeared to be an illustration of bodies being loaded onto a cart during the plague in Milan.

Indiegogo has already placed this particular project “under review,” but the team appears to be trying again on something called the Caribbean Investment Network.

Rating: -😷 “I think that needs to be a minus-1,” Cannon said of its rating. “If I could give this zero stars I would.” She can.

The “evolution of personal protection,” as it’s described, appears to be a contemporary take on an old-timey diving helmet, or one of those bubble backpacks for cats. Basically, it’s a self-contained environment for your head with a battery-powered air filter.

“We do have personal protective gear based on” this sort of idea, Cannon said. But in this case, there could be some potential design flaws. It would be difficult for a wearable device that goes on top of your clothes to create a truly airtight seal. Based on the design, Cannon guessed you would wind up inhaling air that leaked in from around your armpits.

Also, it’s a gigantic plastic bubble that you’re intended to wear out in public. But that hasn’t dissuaded backers: People have already pledged more than a quarter of a million dollars on IndieGoGo to see this one come to life.

Rating: 😷😷😷😷 “I’m going to score that one high just for the level of effort they put into describing it,” Cannon said.

This product looks like a light-up collar or scarf. It purports to emit UVC light that will kill bacteria and viruses instantly. It also has Bluetooth speakers and LED lights, “for style and status.”

This one appears rooted in actual technology: Scientists use industrial UV light ovens to sanitize masks and tools. But people can’t stand in those ovens at the same time.

The image accompanying the IndieGogo campaign — fully funded to the tune of more than twice the $2,500 asking amount, by the by — shows a woman wearing it while relaxing at home. Cannon said this is not a likely scenario for optimal UV sanitization: “Anything you can wear around your neck curled up with a book on the couch is not going to be sufficient to kill the virus.” (The company did not respond to a request for comment.)

Rating: 😷😷😷”I’m fond of this one because it’s by far the prettiest and it does have speakers,” Cannon said.

This Kickstarter wanted just $500 to fund production of a 99% copper multipurpose tool to help people avoid touching germy surfaces with their hands. Backers pledged more than $26,000. It clips to belts or bags and is designed for opening lever door handles and pressing elevator and ATM buttons. It also has a box cutter —- useful, considering how many of us are ordering things online these days — and a socket for a hexagonal screw bit.

With the crowdfunding completed, you can now preorder yours on Etsy.

“I don’t mind these,” Cannon said, “because what I like about them is if you’ve invested the time and effort to think about this and you buy it, it means you’ve recognized the problem of how your hands interact with the world. That’s good. Secondly, if you’ve actually spent money on this gadget hopefully you’ll use it. So the end result is a win.”

It’s probably worth noting you can open doors with a tissue and touch elevator buttons with your elbow or knuckle. Also, scientists now think surface transmission is not a primary vector for spreading coronavirus, but generally speaking, a lot of surfaces are germy and if you can avoid touching them, you should.

When reached for comment, Stay Safe Lab wrote: “Our product is meant to make people feel safer in public places, where there are actual bigger chances of infection.”

Rating: 😷😷😷😷😷 “It’s like something I would buy if I’d been drinking too much and saw this in my Facebook feed,” Cannon said.

It took us a minute to parse exactly what was happening here. The idea seems to be that you come home, straddle the two disinfectant-soaked sides of the mat, and then dry off on the middle area.

Our shoes do track in dirt and germs, that’s true. But there’s a simpler and more elegant solution than a $105 soggy door mat, Cannon noted: “Take your damn shoes off in the house.” (The company could not be reached for comment.)

Rating: 😷😷”I’m gonna give them a 2 because they put a cute baby” in the video, Cannon said. “The presumed mom in the picture is not wearing shoes, you’ll notice.”

How to make a budget skincare routine entirely from food

Wed Jun 17 , 2020
Guys, I just scored the best vitamin C skincare product on the market—for under a dollar. Seriously. 79 cents! No, I did not get some too-cheap-to-be-true counterfeit online. (I’m insulted you would even ask.) I got it from the grocery store. It’s…an orange. I know that sentence may fill you […] 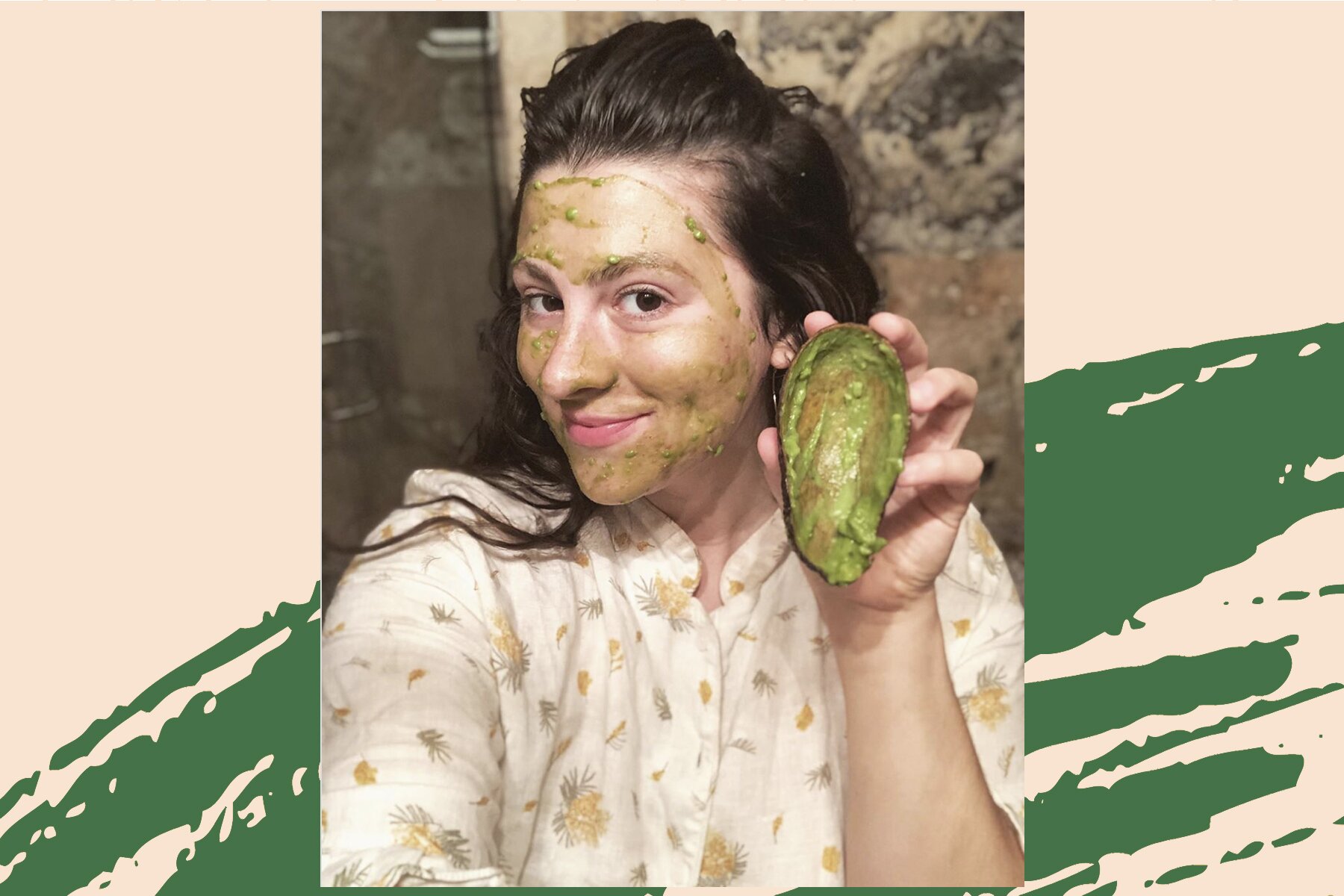