Face down in a prison yard, with bullets zipping over his head and a riot broiling all around him, Don Dickerson committed to start living a clean life that would make a positive impact on the community.

He’s made good on that promise, helping Fitness SF expand to eight gyms that promote physical and mental health in the Bay Area and serving on a series of nonprofit boards that provide amity in a variety of sectors.

But after 16-plus years as the director of operations and then vice president of Fitness SF, Dickerson can’t help but feel as though he’s been forced back to lying in the dirt as chaos surrounds him.

Like so many other businesses in San Francisco, Fitness SF is at a crisis point. If city officials do not start responding to the virus in a data-driven manner, the fitness industry will be nothing but a memory.

The fitness industry has been decimated during the coronavirus pandemic, especially in San Francisco, where gyms and studios are finally scheduled to open Monday with limited capacity for the first time since the mid-March shelter-in-place order — and only days after they won permission to operate outdoors.

During the six months of closure, the San Francisco Independent Fitness Studio Coalition estimates that its nearly 100 businesses have lost close to $40 million. Fitness SF, which has six San Francisco gyms and one each in Corte Madera and Oakland, has lost about $20 million, according to Dickerson.

“This city is everything we love, and it’s really falling apart this year,” Dickerson said. “After half a year, you’re really looking at an extinction-level event.” 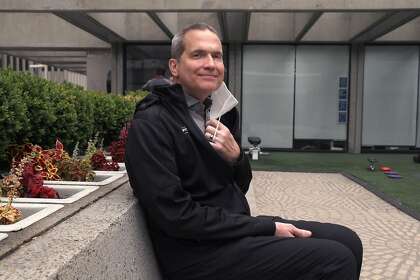 For Dickerson, it’s not just about the fitness industry. It’s about every small business that creates the vibrant heartbeat of the city, including hair and nail salons and massage, tattoo and piercing parlors, which will also finally be allowed to open Monday.

During a 90-day stay in a federal halfway house in 2004, following five years in some of state’s toughest prisons at San Quentin, Lompoc and Susanville because of a meth addiction, he applied for as many as 10 jobs per day without a single interview.

Fitness SF gave him a chance, and he made the most of it — helping the company expand its brand and philanthropic impact. Fitness SF uses its South of Market location to train people from the Harbor Light Center two hours per day, offers a gym to a Hunters Point school that otherwise wouldn’t have access, and works closely with LightHouse for the Blind and Visually Impaired.

Dickerson serves on the board of Muttville and has adopted 11 senior dogs with his husband, in addition to serving on the advisory council of the Harbor Light Center and Trainers Coalition Board.

“I went from having a wasted life to bringing something to society, and everything I’ve worked for is at risk right now,” he said. “I believe in our elected officials, but I just wish they would broaden their view and understand what they are doing to people. People are dying because they’ve lost their ability to support their families and lost their homes. It’s baffling to us that they see this in such a linear way.”

After pausing reopening plans because of a coronavirus surge in June, San Francisco offered no guidance to the fitness industry until Sept. 1, when Mayor London Breed announced that gyms could operate outdoors in a week.

On Wednesday, Health Officer Dr. Tomás Aragón closed city-operated gyms he previously didn’t know were open at police stations and other governmental locations. An hour after The Chronicle obtained the letter from Aragón on Thursday, San Francisco announced plans to open gyms Monday, along with allowing other businesses and activities to resume some indoor operations at limited capacity. For gyms, that is 10% capacity — generally understood to be based on a facility’s maximum occupancy.

For many gyms, opening at 10% capacity indoors might be too little, too late.

Fitness SF has navigated record-setting poor air quality and unique logistical nightmares to open outdoor training at its San Francisco locations, including rooftop-style setups, untenable sidewalks and a circus-like tent. But Dickerson said opening at 10% capacity indoors would cost as much as the business could generate.

After saying for months that he didn’t have data to support San Francisco’s closure of gyms, Aragón wrote in his Wednesday letter to city department heads: “Indoor gyms and fitness centers greatly increase the risk of virus transmission, including from asymptomatic people, due to the relatively limited air circulation, the increase in particle exhalation due to exertion, and the increased risk of people touching shared equipment.”

He did not address the facts that health experts say body mass indexes, diabetes and heart disease — all contributing factors in coronavirus deaths — are at an all-time high and could be lessened by eating right, sleeping well and exercising.

While San Francisco has published detailed guidance for outdoor gym operations, as of Saturday, it had not provided similar guidelines for indoor operations.

“We believe that we’re a tool to be used against the coronavirus. Instead, the Department of Public Health believes it’s smarter for everybody to sit at home and become unhealthier,” said Dickerson, who invested in thermal cameras to check clients’ temperatures, enhanced HVAC filters and months’ worth of personal protective equipment. “We want to operate safely. We want to do our part in this fight. But we need to be given a path forward.

“If DPH won’t speak to us, and Dr. Aragón won’t base his decisions on data, what are we going to do?”

Health and Wellness in a Pandemic

Tue Oct 6 , 2020
Kittens RescueTina shows us how you can rescue kittens that need a home 19 hours ago Big Pumpkin CarvingLori is with Jack the pumpkin grower and watches him carve the big pumpkin! 19 hours ago Good Day RewindSee what you missed on today’s show 19 hours ago Virtual Job and […]