As pandemic re-opening efforts show mixed success, across the U.S., there have been reports of long lines for COVID-19 testing, and shortages in some places. One solution could be pooled testing, a strategy that’s already been used in China, Germany, Israel and South Africa to test a large number of people in a short amount of time.

The idea is to get more out of each COVID-19 test by skimming off a small amount of material from each person’s sample, combining them into a single ‘sample’ and running the test on that. If the sample is negative, then there’s a good chance that all of the people who contributed to that sample are negative for COVID-19. If the pooled sample is positive, then technicians go back and test each sample separately to determine which one was positive.

Such a strategy is a sort of testing triage, and could save on testing kits, and make testing more efficient. “You can test more people more often,” says Oliver Laeyendecker, associate professor of medicine and epidemiology at Johns Hopkins University.

Peter Iwen, director of the Nebraska Public Health Laboratory, saw pooled testing as a way to save on precious reagents—the chemical substances needed to run COVID-19 tests—which were, and continue to run in short supply as demand for testing surges. He knew that pooled testing had been used effectively in the past by blood banks testing for STDs, and thought “there was no reason why it shouldn’t work for COVID-19,” he says.

In mid-March, Iwen put his idea to the test. He ran a few tests, each time taking a sample from a patient with confirmed COVID-19 who had very low levels of virus in the sample, and adding it to four other samples that were negative for COVID-19. He used the U.S. Centers for Disease Control’s (CDC) COVID-19 test, and despite the low levels of virus, each time, he was able to pick up the positive sample.

He presented his data to the CDC and the Food and Drug Administration, which must validate and approve any diagnostic test that produces results returned to patients. He received encouragement about his results but no definitive answer about whether he could start using pooled testing for COVID-19 samples. “I needed an answer quickly,” he says. “We were getting short [on reagents].”

Iwen then decided to send his data to the governor of Nebraska in an effort to speed things along, and received the governor’s authorization to start using pooled testing in the public health lab Iwen oversees. Days later, he also received authorization from the FDA to start testing in pools of five samples each.

Iwen began using pooled testing on March 24, and says it worked to pick up infections when Nebraska’s COVID-19 tally was relatively low. But he had to stop on April 25 as the percent of positive samples at the lab started climbing. He says the pooled testing for that month, however, did allow him to save enough reagent to remain open and continue testing for COVID-19. Testing in the state is currently showing a 10% positivity rate, which Iwen says “is a little high for pooling in my mind.”

So what are the ideal conditions for using pooled testing? The success of pooled testing depends on a number of different factors.

The first is the prevalence of COVID-19 in a specific population. If SARS-CoV-2, the virus responsible for the disease, is circulating widely in a specific group, more of the pooled samples would be positive and technicians would need to test all of them separately anyway, making pooled testing inefficient. But if infection rates are low, the chances of finding a positive pooled ‘sample’ is low enough that it makes pooling worthwhile. If testing rates are also low in such populations, then pooled testing becomes even more efficient since it allows labs to test more people with fewer resources.

It’s a strategy done with some success in HIV testing. Chris Pilcher, professor of medicine at the University of California, San Francisco and in the division of HIV, infectious diseases and global medicine at San Francisco General Hospital, pioneered the method in North Carolina with its public health labs in the early 2000s. It’s now used by a number of cities, including San Francisco and New York.

If an infectious disease like COVID-19 is a forest fire, says Pilcher, then the U.S and most of the world is still in the urgent fire-fighting stage, testing as widely as possible and isolating cases when they’re found. Once the raging fire is contained, there are still embers and smoldering fires that need to be detected and doused. Pooled testing can be a way to surveil the infection landscape to identify those new outbreaks as quickly and as efficiently as possible, before they flare up again into major outbreaks.

In a study accepted by the Journal of Infectious Diseases and released online, Pilcher and his team modeled how effective pooled testing could be for COVID-19. They found that the strategy could increase efficiency by testing anywhere from two to 20 times the number of samples compared to individual testing.

“I think that [pooled testing] is something that is going to be needed,” says Pilcher. As people return to work, school and large group activities, pooled testing could be a way to conduct regular testing without overloading the lab network. Employers, schools, nursing homes and hospitals may want to repeat testing on a regular basis to ensure people are protected from infection, and relying on pooled testing would make this feasible.

One concern that experts have about pooling COVID-19 test samples is that studies so far suggest that the amount of virus in these samples, especially from those who are asymptomatic or mildly symptomatic, is sometimes extremely low. Taking a small part of a sample that already has only a small amount of detectable virus and mixing it with other samples will further dilute the concentration of detectable virus.

By comparison, people with HIV often have very high viral loads even early in the infection, says Dr. Jennifer Rakeman, assistant commissioner and lab director for the New York City Public Health Laboratories, which are part of the New York City Department of Health and Mental Hygiene. So even when samples are pooled together, there’s enough of detectable virus for the tests to pick it up. In the New York labs, 16 HIV samples are generally diluted into a single pooled sample.

By using smaller pool sizes, however, Iwen found it’s possible to still detect low amounts of SARS-CoV-2 in COVID-19 samples, but he admits that “we are still trying to figure out all of the details.”

Because incidence of COVID-19 is high in many parts of the country, and still climbing, most of the U.S. isn’t ready yet for pooled testing of the general population in a city, for example, or specific region. But Iwen says as testing reagents dwindle, pooled testing of select populations, who are at low risk but still need testing, might make sense.

For example, residents in a nursing home who are taking precautions to protect themselves and not seeing outside visitors may be at low risk of infection. But because nursing home residents are at high risk for severe illness if they do get infected, they still need to be tested regularly, so staff could provide the proper care to any individuals with the virus and to put into place the right isolation measures to prevent spread of the disease. In such situations, says Iwen, “selective pooling I think is really the answer.”

He also says if labs know where a group of samples comes from, they could make smarter decisions about when to use pooled testing. “If this box of samples is surveillance of an asymptomatic football team, for example, we would expect at most one or two samples to be positive. But if a box of specimens is from a meat-packing plant where 30% have already tested positive, that’s more high risk and I’m going to treat it as such and not use pooled testing.”

In New York City’s public health labs, scientists are currently exploring pooled testing in a specific neighborhood where there is a higher risk of infection but low levels of testing. “We will go back and look at the data for the number of positives we get, and if we had pooled samples, would we have picked them up,” Rakeman says. “We can use that information on how to use pooling going forward.” Largely, the goal for labs is to conserve reagent supplies. “Pooling can save 70% or so in reagents if it’s done correctly,” says Iwen.

Collecting the data needed to determine when and where pooled testing can work will take time and effort, but it could pay off; a much more efficient COVID-19 testing process would be a major tool to bring the pandemic under control in the U.S. “There are ways to figure this stuff out; there has got to be a better way,” says Iwen. “I don’t think we can wait much longer.”

Navarro under fire over anti-Fauci op-ed

Wed Jul 15 , 2020
President Donald Trump’s top trade adviser came under fire Wednesday for assailing Dr. Anthony Fauci in a new op-ed, with even the White House distancing itself from the diatribe after waging its own smear campaign against the nation’s top infectious disease expert over the weekend. Alyssa Farah, White House director […] 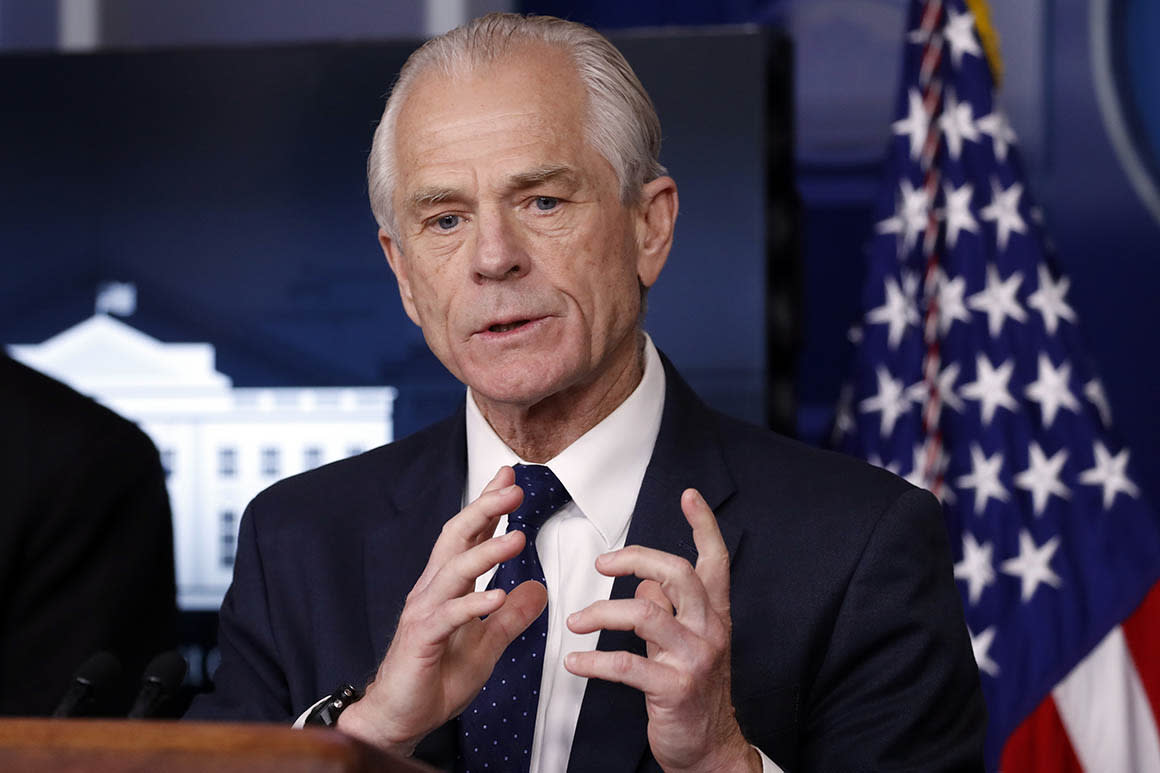